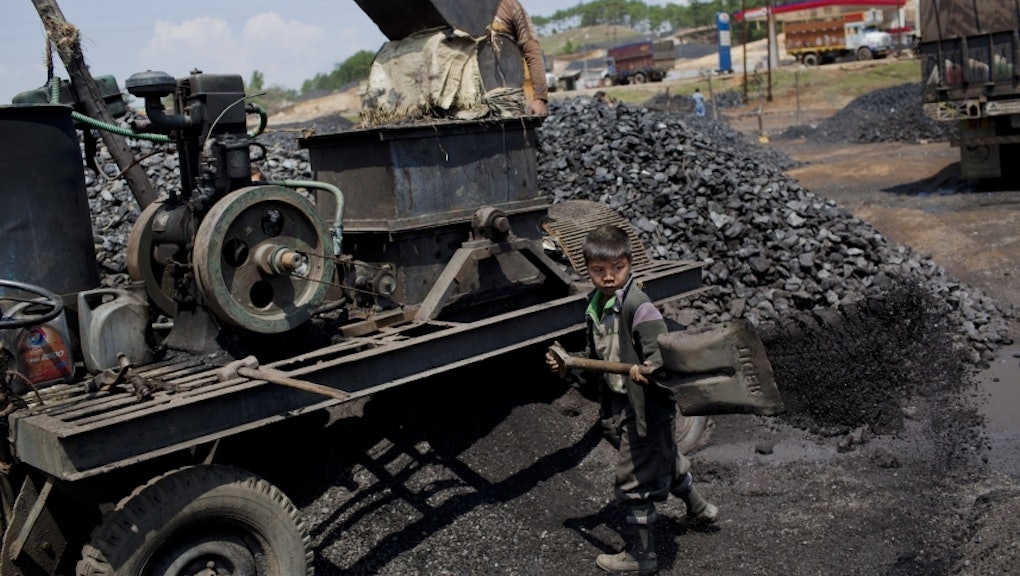 You've Heard About the Carbon Footprint, But Do You Know What Your Slavery Footprint Is?

By now, the concept of the carbon footprint has caught on, and most people are at least somewhat aware that their consumer behavior affects our environment. The chances are, however, you probably don't know as much about your total slavery footprint.

That's right, your slavery footprint. Every day, millions of people around the world are enslaved as part of the global production line that pumps out thousands of products. And most of us are totally unaware of it. This supply chain arguably employs more slaves now than at any other point in history, and some of them are probably working for you.

Although it's much easier to walk through the world in total denial of the forced labor that may have contributed to the creation of our shoes, an organization dedicated to ending slave labor is determined to make us think about how business is connected to slavery. Based out of Oakland, the Slavery Footprint was founded in 2011 as a collaborative effort between Call + Response, an anti-slavery organization, and the State Department's Office to Monitor and Combat Trafficking in Persons.

Through its app and website, the Slavery Footprint offers a quick test that estimates what a person's spending habits mean in the context of known slave labor statistics.

As you take the test, the average person may be shocked to find out that innocuous products – from a favorite blush, that daily Starbucks latte, the carpet in your office or even that shrimp cocktail you had for lunch – were all produced with the help of slaves.

The website launched with one simple question: "How many slaves work for you?" Originally so popular that it crashed, website founder Justin Dillon said his project has "crashed slavery" as well. The glitches have now been fixed, and the website currently hosts millions of users from more than 200 countries.

According to the organization, your total slavery footprint "represents the number of forced laborers that were likely to be involved in creating and manufacturing the products you buy." The test, which only takes a few minutes, uses a few key questions to make up an estimate of the amount of forced laborers it requires to sustain your current consumer habits.

Slaves, for the purposes of the Slavery Footprint methodology, are defined as "anyone who is forced to work without pay, being economically exploited and is unable to walk away," and it notes that forced labor "may result when unscrupulous employers exploit workers made more vulnerable by high rates of unemployment, poverty, crime, discrimination, corruption, political conflict or cultural acceptance of the practice."

Although immigrants are especially vulnerable, slavery happens within one's own country as well. Women and girls, especially those forced into the domestic sphere, are also often sexually assaulted and abused.

The detailed methodology can be found on the website, but the statistics were formulated by researchers looking into the average slavery usage for more than 400 products. Based on the "most common places in which they are mined, grown or made," the developers of the test assigned a score to each consumer item. Researchers then came up with an algorithm that "determines the minimum number of slaves (forced laborers) used to produce each product."

Although some experts are criticizing the organization for grossly exaggerating some of the figures, most can agree their humble goal to raise awareness about modern slavery is working. According to Free the Slaves, there are approximately 21-30 million people stuck in forced labor, most of which are female. Even though slavery is illegal everywhere in the world, only 1% of its beneficiaries are ever prosecuted. Most people still don't realize the magnitude of the problem and how their buying habits are contributing to it..

The website exists not so much as way to shame people into a dark hole of uncomfortable privilege, but as a way to do something about your impact on slave labor. The Slavery Footprint enables visitors to send notes to companies who use slave labor like Sony, Apple, Walmart, Procter & Gamble, H&M and J.Crew.

Powered by their umbrella organization, "Made in a Free World," the Slavery Footprint isn't just helping consumers choose better products — they are also dedicated to helping manufacturers remove slavery from their production line by helping them come up with creative business alternatives. Every donation aims to rescue, rehabilitate and reintegrate forced laborers around the world.

Take the test for yourself, share it with your friends and let corporations know that they shouldn't rely on slavery to manufacture goods.

How many slaves who work for you? How shocked were you? Let me know on Twitter and Facebook.