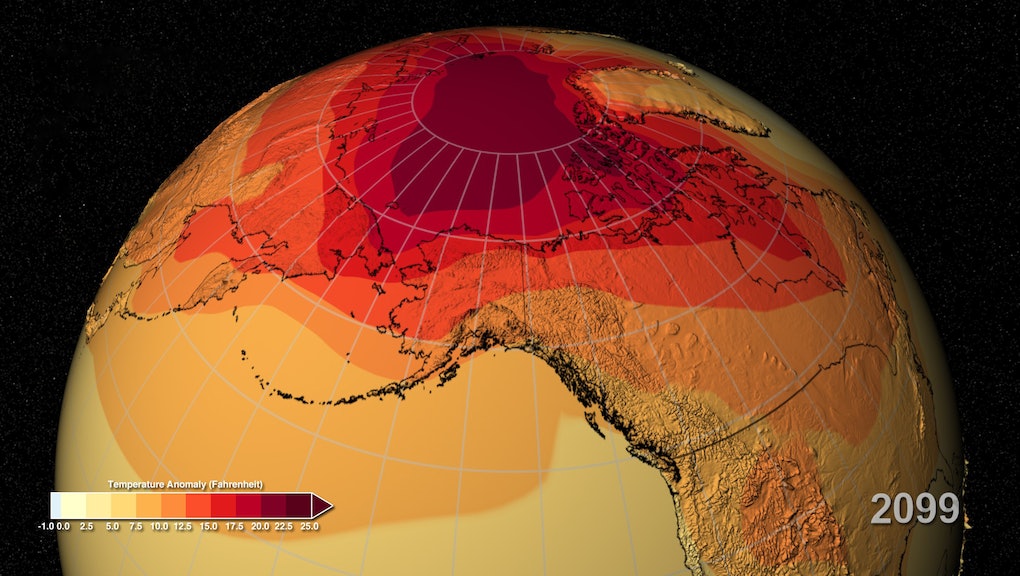 In One Stunning Graphic, NASA Shows Us What Climate Change Will Do to Earth by 2099

Climate science is an important but supremely difficult undertaking. To analyze data, models have to account for complex elements like atmosphere, oceans, land surface, ice and the sun. Suffice to say, it can get pretty hard to follow.

So, to try to at least somewhat shed light on this topic, NASA recently created a stunning climate visualization that shows how the globe is predicted to warm in the next century.

The visualization was created by combining 15 different climate models that were all part of the big Intergovernmental Panel on Climate Change (IPCC) report released last year. While all the models indisputably predict warming, they differ in terms of exactly how high they estimate temperatures will rise.

The divergence occurs because of the ways the models are obtained (historical, modern or simulated), and because they weigh the influence of individual factors differently. But despite these difference, they're all saying one thing: the Earth is getting warmer.

"Science" for skeptics: Despite all the models showing a clear consensus for warming, climate skeptics argue these slight variations support their views.

Although claimed by many to be anti-science, skeptics often don't contest the fact that the Earth is warming. Rather, the strategy of secretively well-funded conservative think tanks has been to try and throw a wrench in the works by claiming that variations in the data — especially those with lower temperature predictions — are evidence for natural warming that's not caused by human activity.

It's a very clever and, unfortunately, effective misdirection strategy. Some climate skeptics even have the nerve to claim that climate activists are the ones who are being anti-science.

The latest data: This is why NASA's latest data is so important. As one of their main arguments, climate skeptics often point to that fact that the increase in global temperatures has slowed to a rate of 0.05 Celsius per decade since 1998. This is down from 0.12 C per decade since 1951, and in spite of the fact that carbon dioxide levels in the atmosphere continue to rise by over 1% each year.

But NASA's data has an explanation for the discrepancy. The study looked closely at various factors that affect the sensitivity of the Earth's climate. One of these factors is aerosols, which are airborne particles produced both naturally by things like volcanoes, and from human activities such manufacturing and operating automobiles.

NASA's research shows that the cooling effect of aerosols has been miscalculated because aerosols are not distributed uniformly, but are more concentrated in the Northern Hemisphere where there is more human activity and landmass. This means that many climate models, especially those which are mainly based on temperature observations rather than more comprehensive computer modelling, may have underestimated their predictions.

Although in the short-term, aerosols can have a cooling effect, in the long-term the cooling is negated by the sheer amount of carbon in the atmosphere. "I wish we could take some solace from the slowdown in the rate of warming," says NASA climatologist Dr. Drew Shindell. "But all the evidence now agrees that future warming is likely to be towards the high end of our estimates so it's more clear than ever that we need large, rapid emissions reductions to avoid the worst damages from climate change."

The research predicts that Earth is likely to experience around 20% more warming than previous lower estimates.

These studies add to the convincing evidence needed to push for stronger policies on lowering carbon emissions. To achieve this political end, climate activists need to be smarter and understand that skeptics' power lies not in denying science, but in effectively obfuscating it. Important and clear research like NASA's will help greatly in counteracting these dangerous strategies.