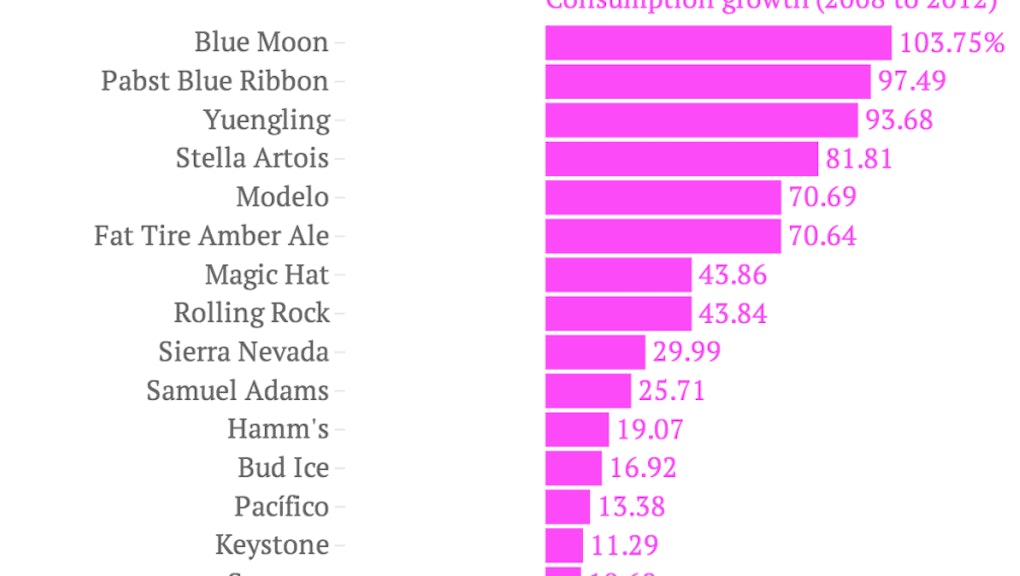 While long-time favorites such as Budweiser, Coors Light and Miller Lite still rule the American beer market, there's more and more to worry about every year. Not only is beer consumption shrinking, but more people are choosing craft beers than ever. And one craft beer in particular is standing out from rest: Blue Moon.

Of course, Blue Moon is not a true craft beer: because it's owned by MillerCoors, which sells 67 billion barrels of beer a year (breweries with the "craft" label sell less than 6 million barrels), Blue Moon is sometimes considered a faux-craft or "crafty" beer. Still, Blue Moon's seemingly cool, independent factor has caught on, and it's contributing to a rapid rise in popularity across America.

Here is a list of beers ordered by their consumption growth from 2008 to 2012:

Craft or craft-y? While many of the standard brands are struggling, craft beers and crafty beers are rising to the top. Yuengling, Fat Tire Amber Ale, Magic Hat, Sierra Nevada and Samuel Adams all meet the craft beer standards, while brands like Rolling Rock, Hamm's and Pacifico are in fact owned by bigger companies.

And there's a reason why more and more companies are buying up microbreweries or rolling out beers like Blue Moon. Sales of craft beer have grown 16% over the last year, while big brands have suffered a 1.7% decline. By putting out seemingly-independent brands, companies like A-B InBev and SABMiller can imitate the hipster coolness of craft beers without mentioning they're actually owned by giant conglomerates.

Why are craft beers now all the rage? There is one key factor: millennials. According to a study by Euromonitor, "Young American consumers are turned off by the ubiquity of light lagers and are looking to explore their taste buds. These millennials are looking for the next new things to try and then share their experiences on social media sites." Millennials' incessant need to discover the new cool thing and share it online may be the engine behind the craft takeover — beer-sharing social apps like Untappd are a perfect example of this.

But the conglomerates that are attempting to replicate craft beers need to be mindful of a potential backlash. "Large beer manufacturers have to be careful in harnessing this trend. It is somewhat tricky to grow a product while trying to keep it 'cool' and without diluting the uniqueness that may have initially attracted its consumer base," the report adds. Basically, if the hipsters realize you are pulling wool over their eyes, they'll turn against you.

In the meantime, blue and red states alike have been captivated by Blue Moon. Here is a map charting the favorite beers of each state: