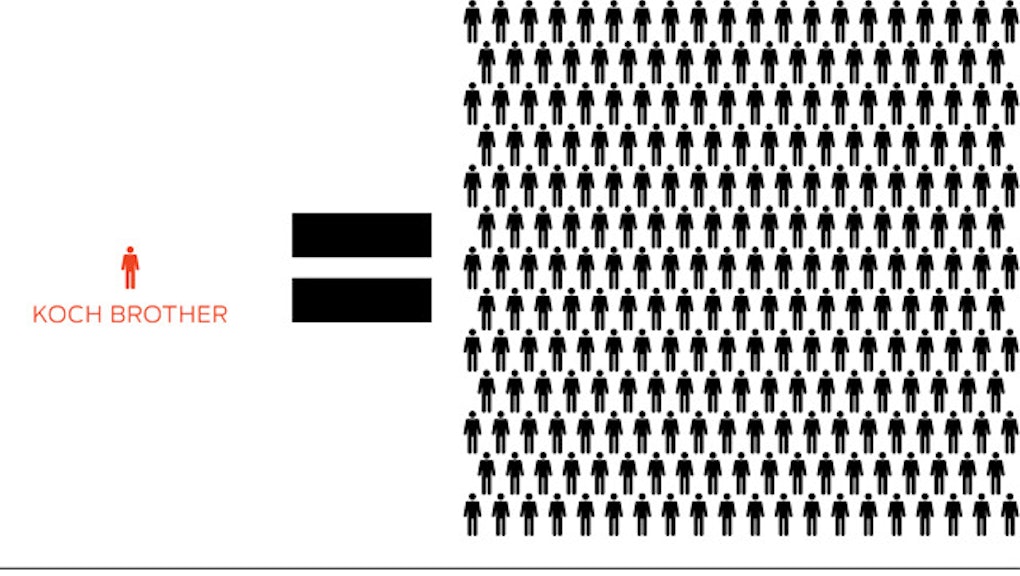 This Image Shows Exactly How Much Power One Koch Brother Has

How much influence do huge "dark money" donors like the Koch brothers have on politics? According to this graphic from the New Republic, it's about the same as 515,000 union members. Per brother.

Overall, unions spend much more on campaigns in raw, direct donations — about $639 million on campaigns between 1989 and 2014 — than the Koch affiliates' $18 million. But the picture gets a lot darker when you consider that the Kochs are just two people with some 350 employees making direct contributions compared to 14.5 million unionized workers nationwide. Furthermore, that number's completely misleading since the Kochs don't spend their money on campaigns, it goes to conservative nonprofits, super PACs or other "undisclosed spending." In 2012 alone, researcher Robert Maguire worked out that Koch-backed intermediaries spent around $170 million. Labor could only dole out about $24 million for similar causes.

Using some rough math, TNR's Jonathan Cohn worked out that each of the Koch-affiliated organizations' 200 supporters (including the brothers themselves) have about $850,000 of influence each, compared to just $1.65 per union member. At those levels, each Koch brother or affiliate is worth about 515,000 union members.

But by another estimate, summed up in this graph from Republic Report, Cohn might be low-balling it. When you factor in all Koch spending on the 2012 election, the figure dwarfs the top 10 labor unions.

We know how much unions spend — because they have to disclose every penny. And using only what we know of Koch spending, it's nowhere near the brothers' clout. Then, if you consider the fact that more money the Kochs spent as a corporate entity could be unreported, you start getting into a very scary place.