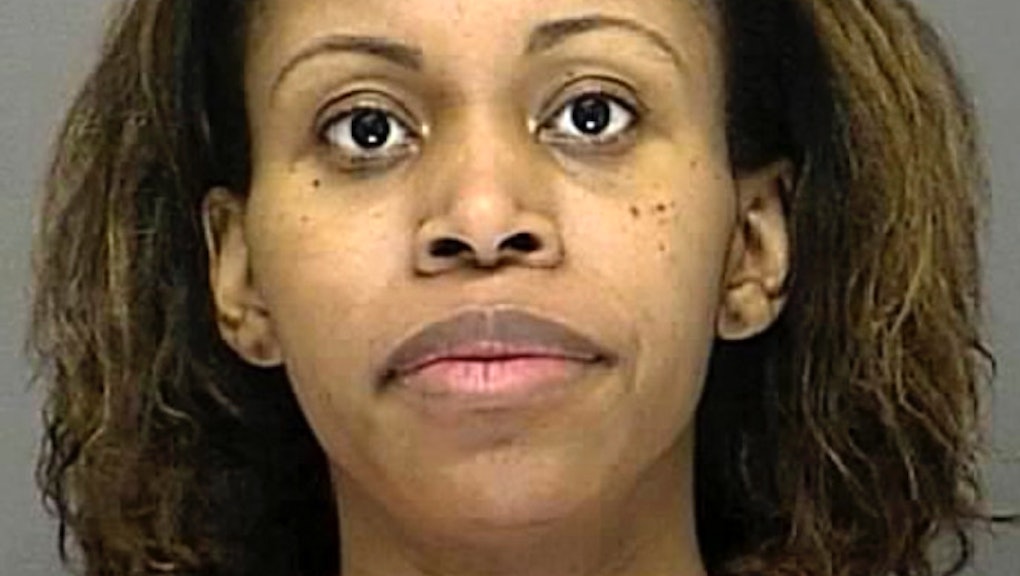 Ebony Wilkerson lived in South Carolina before she was imprisoned.

But last Tuesday, the pregnant 32-year-old drove her minivan into the Atlantic Ocean off the coast of Daytona Beach, Fla. Her three children were sitting in the backseat, screaming as water rushed in through the windows. No one was hurt, but she's being charged with three counts of attempted murder and child abuse.

This case is beyond horrific, but there's more to the story. According Jessica Harrell, Wilkerson's sister, she had been hospitalized the day before following an alleged domestic dispute with her husband, Lutful Ronjon.

Wilkerson checked herself out of the hospital, but Harrell was still worried about her. So she called the police and told the dispatcher Wilkerson was "still not all there" and had been "talking about Jesus and how there were demons in my house and how I'm trying to control her but I'm trying to keep them safe."

Wilkerson had driven to Florida by this point. When the Daytona Beach police pulled her over, the 32-year-old informed the officer that she was afraid her husband was coming to harm her children: "It was clear during my conversation that Wilkerson was suffering from some form of mental illness," the officer wrote in his report, "but she was lucid." He added that the children were smiling quietly in the backseat and showed no signs of distress. So he let them go.

Not long after, Wilkerson was driving into the Atlantic. When one of her kids asked what she was doing, she allegedly replied, "I am keeping us all safe."

Witnesses who rushed to help said Wilkerson tried to stop them, insisting that "everything was OK" and "I've got to do this." In later interviews, the children informed authorities that their mother had been "acting crazy and speaking to Jesus" and "told them to close their eyes and go to sleep" before driving them into the water.

What's really going on here? Speculation has since arisen around the 32-year-old's mental health. While her family insists she has no history of mental illness, an undiagnosed disorder is possible considering eyewitness accounts of the incident and the events leading up to it.

There's also the problem of under-diagnosis among black Americans. According to NewsOne legal analyst Eric Guster, blacks are especially likely to "treat mental illness as a horrible thing and never talk about it or get help. That makes it difficult in a defense." Guster adds, "because there's not a diagnosis already … Without the history, it's much more difficult to prove the illness."

The National Alliance on Mental Illness adds that such afflictions are stigmatized in the black community. A recent study from Mental Health America of Colorado shows that 63% of black Americans consider depression a "personal weakness," compared to the survey average of 54%. Socioeconomic factors also limit black Americans' access to health care, resulting in higher rates of misdiagnosis and over-reliance on primary care physicians instead of specialists.

What does this mean for Ebony Wilkerson? Only time will tell. Proving an insanity defense is notoriously difficult, the result being a national prison system where "fully half of all prisoners have at least one mental disorder," according to Scientific American. The cruel irony is that recidivism rates are "significantly" lower among offenders who've been treated in forensic hospitals instead of jail. The prison system "does very little to successfully treat them," writes Robert Byron.

If Scientific American is to be believed, the American justice system is currently keeping over one million sick people untreated under lock and key. In many cases, these prisoners cannot even be held fully responsible for their actions: mental illness isn't definitively linked to violence, but violent manifestations are overwhelmingly tied to social factors like growing up in an unstable household, parental history of neglect and/or physical abuse and even post-traumatic stress.

Imprisoning these people without treatment is not only unjust, it's an incredible misuse of the $63.4 billion we spend annually to keep 2.4 million prisoners locked up. And now the question remains: would Ebony Wilkerson be subjected to the same fate?

That depends. The surface evidence suggests that Wilkerson suffers from some kind of mental illness or trauma, perhaps related to her husband's alleged abuse. But the truth remains unclear, and the only way we'll know for certain is if the defense prompts a definitive diagnosis and uses it during legal proceedings.

But considering the legal system's track record on the issue, even that doesn't guarantee recourse to justice. And therein lies the larger issue.