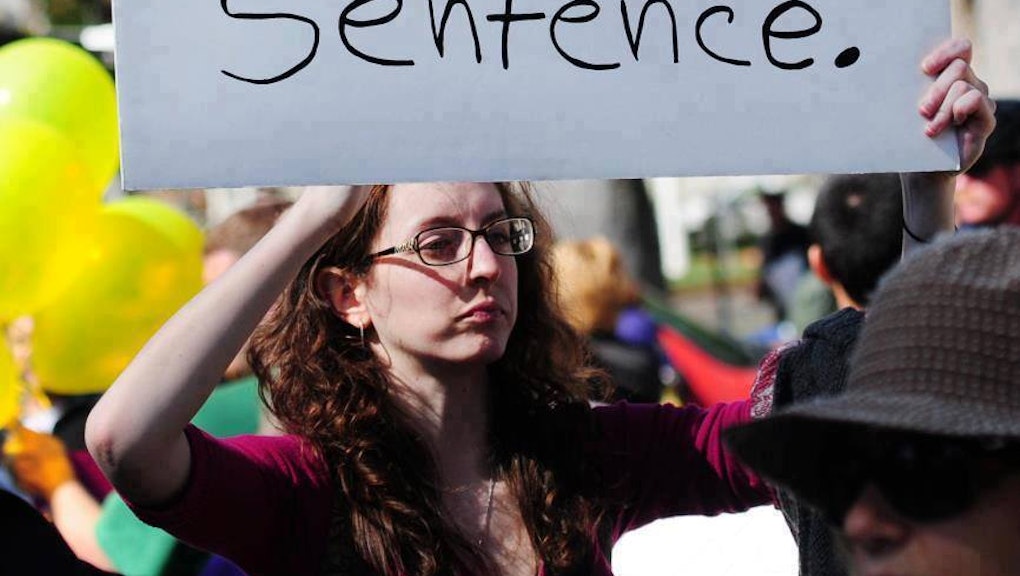 7 Startling Facts That College Graduates Know All Too Well

In early March Sen. Elizabeth Warren (D-Mass.) kicked off "Higher Ed, Not Debt," a coalition of more than 60 progressive groups looking to turn the widespread frustration over student debt into a full-fledged political force.

The system is in desperate need of an upgrade. The biggest banks in the country enjoy discounted interest rates at 1% while student loans have the potential to increase up to 8.25% for undergraduates and 9.5% for graduates. This just goes to show that we invest more in millionaires than in students working hard for an education.

Warren and allies are introducing legislation that could dramatically affect the cost of education. One particular change would allow current undergraduates to refinance their student loans at 3.86%, which would reduce annual payments by up to $1,000. It would be part of a larger, desperately needed cahnged.

Here are seven more startling facts about student loan debt that reveal how urgent the situation is:

1. About two-thirds of all college students graduate with student loans.

Debt is an inescapable reality for many prospective college students, in part due to the rising cost of college expenses. According to Bloomberg News, college tuition fees have increased a whopping 1,120% since records began in 1978, far outpacing the rate of inflation. The number of students who went into debt to get a bachelor's degree has risen from 45% in 1993 to 94% in 2012.

Fifty-eight percent of all student debt is held by families in the bottom 25% of household incomes. Additionally, outstanding student loan debt is a 25% share of the same bottom-fifth's income, compared to 12% of the middle-fifth and only 2% of the richest 10% of families.

This is a dramatic increase from the 2011 debt load of $26,600. Since 2008 student loan debt has increased at an average rate of 6% per year, thanks to more students in college and higher tuition fees. Some people have resorted to extreme measures such as living in a van while in graduate school, teaching English abroad and couch-surfing to save money and pay off their loans as fast as possible.

4. The highest percentage of student loans are taken out at for-profit colleges.

This amounts to more students in debt than the number of people in more than 200 countries. Moreover, the debt has already quadrupled from $250 billion in 2004, exceeding both automobile and credit card debt in the United States, and is growing at a rate of $2,853.88 per second. Many struggle to pay back student loans as 48% of 25 to 34-year-olds say they are underemployed or unemployed.

The Urban Institute published those numbers in June 2013. President Obama, 52, even famously said back in 2012, "I only paid off my student loans eight years ago," adding that he and his wife Michelle paid more on their student loans than they did on the mortgage of their condo during their first eight years of marriage. Find out how long it will take to pay off your student loans here.

A significant number of graduates report taking jobs that offer higher pay but low satisfaction in order to pay off their student loans. One negative impact of this decision is that talent is taken away from public interest fields. Income-based student loan repayment plans exist to make career choices more available for those with debt. However, these programs have been poorly advertised and as a result, too few people take advantage or know about income-based repayment.

We're the future and deserve to be treated just as well, if not better, than any commercial bank.