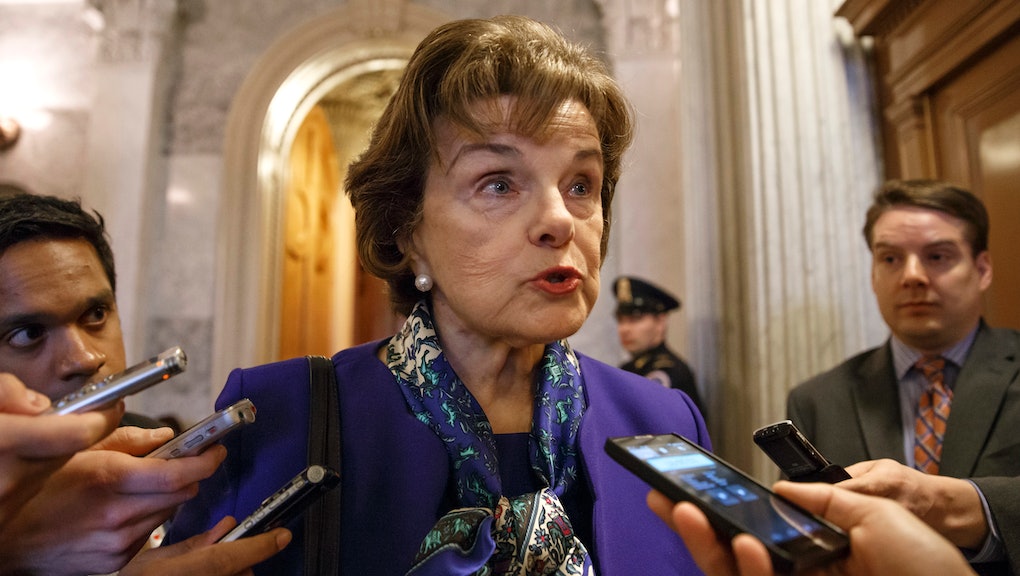 Congress Doesn't Mind the NSA Spying on You. But They Flip When the CIA Spies on Them.

Until this week, the Senate Intelligence Committee hasn't been too perturbed by domestic spying. But now that the senators themselves are being targeted, they believe that spying is a matter of moral outrage.

On Tuesday, Sen. Dianne Feinstein (D-Calif.) took to the Senate floor to accuse the CIA of spying on her committe's work. The CIA had previously set up a private workspace where the senators could look at the agency's classified documents on President George Bush's rendition and extradition programs. But over the past few days, the CIA and the Congress have gotten into a finger-pointing war about improperly accessed documents and who spied on whom.

Feinstein's speech is now escalating the tension by blatantly accusing the CIA of breaking the law. "I have asked for an apology, and a recognition that this CIA search of computers used by this oversight committee was inappropriate. I have received neither," Feinstein said. "Besides the constitutional implications, the CIA search may have violated the Fourth Amendment, the Computer Fraud and Abuse Act, as well as [an executive order], which bars the CIA from conducting domestic surveillance."

Why is this important? Feinstein's vocal protest has won support from both sides of the aisle, but it seems like some of the senators have forgotten a crucial detail: they have never been huge critics of domestic spying.

For instance, Sen. Lindsey Graham (R-S.C.) had previously said that he was "glad" that the National Security Agency (NSA) was collecting his private phone data, because "the NSA is trying to find out what the terrorists are up to overseas and in our country." Now, he believes, "This is Richard Nixon stuff. This is dangerous to the democracy. Heads should roll, people should go to jail if it’s true. If it is, the legislative branch should declare war on the CIA."

Feinstein herself had said that NSA's spying scheme was justifiable because, "It's called protecting America." But both she and Graham are now less receptive to surveillance when they are on the receiving end.

What will happen next? CIA director John Brennan has adamantly denied the claims that the agency did anything illegal, but he did admit that an investigation was pending. "Appropriate authorities right now, both inside of CIA as well as outside of CIA, are looking at what CIA officers as well as what [Senate] staffers did. I defer to them," he said.

So far, the conflict has been limited to a war of words, but if it continues to escalate, the Justice Department and special prosecutors may have to get involved.

But if one positive thing is coming out of this issue, it's that some senators are finally rallying together in a rare show of bipartisanship. Senators such as Harry Reid (D-Nev.), Carl Levin (D-Mich.), Patrick Leahy (D-Vt.), John McCain (R-Ariz.) and Mike Lee (R-Utah) are now all strange bedfellows, and that's something to be grateful for in this time of partisan infighting.