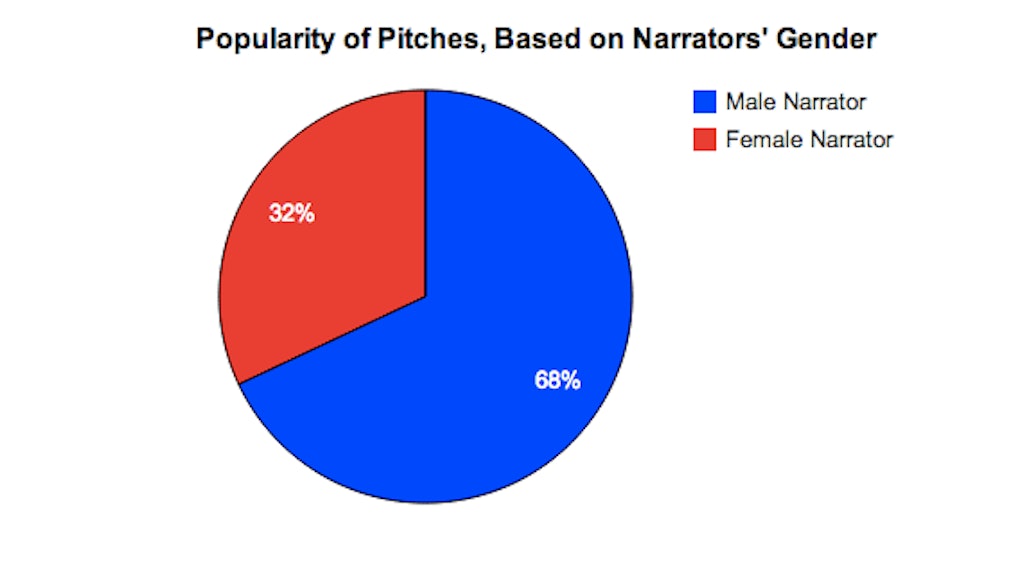 Women have it tough. Business propositions — whether presented in a boardroom, coffee shop or pitch contest — are discounted as soon as women open their mouths.

We're not just saying that. There's proof: Gender has a more significant impact on decision-makers than the presenter's experience or the topic she's discussing, according to a new study conducted by professors from Harvard, MIT and Wharton.

Researchers have uncovered "a profound and persistent preference for entrepreneurial ventures pitched by men."

The impact of gender is definitive in a video analysis of 90 pitches at startup competitions. Over a three-year period, male entrepreneurs were 60% more likely than females to receive funding prizes.

This kind of sexism is known about in the corporate world where women are cut off from opportunities based on their gender. But unlike old-school corporations, the startup world is supposed to be a youthful place with great potential to change sexism in the workplace. Instead male-dominated bureaucracies continue to dominate.

Part of the problem are preexisting "boys' clubs" that leave women feeling alienated during events and gatherings where many deals and promotions are discussed. People naturally connect with others like them and unknowingly give into a self-selection bias. With so few women in tech, a woman standing before a group of men pitching her idea is about as foreign as they come.

"Imagine men had to step into a store to be measured each time they bought a condom," was how Hashay began her pitch so that an audience made up of 90% men could understand the pain point her startup addressed.

But this bias extends beyond investors or bosses.

Even regular people overwhelmingly chose a pitch narrated by a male over one narrated by a female (68% versus 32%), despite the fact that the pitches were identical.

Women have to work twice as hard as men to have their ideas heard, if they can punch through the persisting wall of prejudice at all.

How can women trust and contribute to a system where the quality of their ideas is undermined by the sound of their voice? How do we change this? Making male investors aware of their self-selection bias is a start. But women in tech should also spend extra time mentoring and supporting one another.

Lisa Falzone, co-founder of point-of-sale (POS) Revel Systems told Entrepreneur magazine that in order to change the scene women, need to be involved in the next generation:

"This gender issue and bias is due to part inspiration and part awareness. It's important to be aware that girls want to grow up and create things just as much as boys do. It's up to the current startup founders to encourage this next generation to be involved in the VC process and startup movement. The bias will eventually even out, but we can take steps to help accelerate that process."

Men investors need to also be aware that keeping women out of the tech game is only hurting the entire economy. According to the Economist, if women entrepreneurs received the same funding as men, approximately 6 million jobs would be added to the U.S. economy in five years.

Watch entrepreneur Cindy Gallop give tips on funding for women: