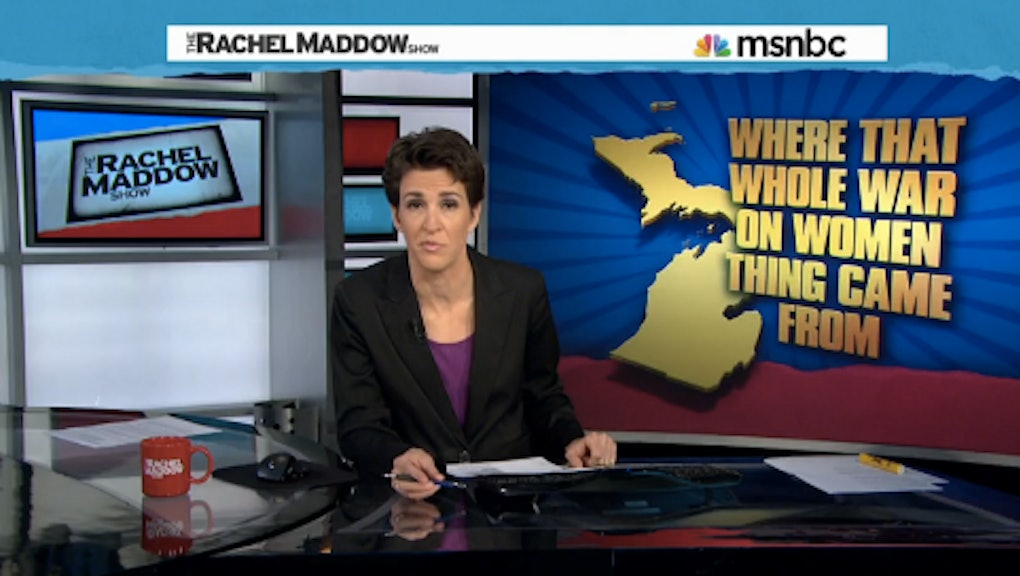 The news: While noted feminist scholars such as Rand Paul may believe that the "war on women" is over, the fight over women's reproductive rights and protection from rape continues to rage on. A case in point? This insanely regressive and nonsensical law that will make it nearly impossible for Michigan women to be covered for abortions.

The new law, nicknamed "rape insurance," bars women from having an abortion unless they'd previously purchased a stand-alone insurance policy to cover it. That's right: every month, women in Michigan now have to pre-purchase abortion insurance, with no exceptions for rape or incest.

As MSNBC's Rachel Maddow points out, it's not as if "lots of people plan ahead for unplanned pregnancies." But that kind of logic has no place in Michigan's Republican-controlled legislature. Watch Maddow's epic takedown below:

But the most disturbing thing about the Michigan law, as Maddow points out, is the fact that it's insanely difficult for women to buy the abortion insurance. So far, seven companies are offering to sell the new rider policy in Michigan to complement existing employment plans. But if you have individual coverage — whether through the federal health care exchanges or not — you are simply out of luck. There is no company that will sell you the insurance.

Catch-22: That's the twisted brilliance of this absurd law: if women without pre-existing abortion coverage think they might potentially have an abortion in the future, they need to get a separate insurance for it. But if they want to get that separate insurance, they must have already had pre-existing employee coverage through one of the seven companies that offer it.

Not just Michigan: If you thought that's depressing, consider this: Ohio is planning on following Michigan's suit, and eight other states besides Michigan have laws just like it. In North Dakota, Idaho, Kentucky, Missouri, Kansas, Nebraska, Oklahoma and Utah, there are severe restrictions on private health coverage for women — Utah is the only one that makes an exception for rape. And since the Affordable Care Act exchanges went into effect, 23 states have banned the sale of abortion coverage in the marketplace.

This is not a problem that is simply limited to Michigan. While abortion may still technically be legal in the U.S., these calculated laws make it de facto non-existent in an increasing number of states.