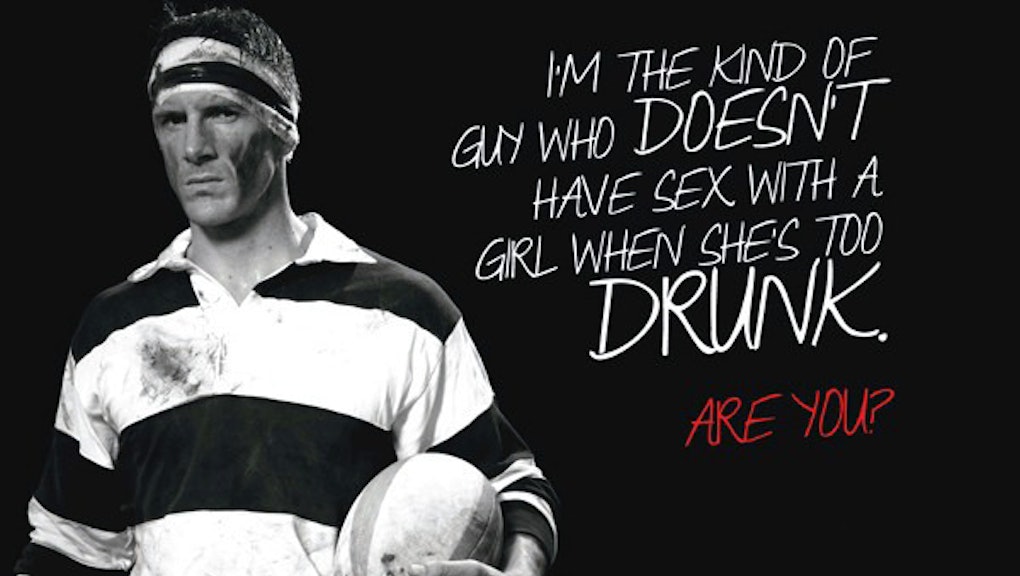 Sex without consent is rape. Although a key point of anti-rape advocacy efforts, this point seems to be lost in many public service campaigns. Police Scotland's on-point anti-rape campaign, "We Can Stop It," intelligently targets men in an effective attempt to drive home this point.

Unlike many anti-rape awareness that focus on educating women — the presumed victims of sexual assault — this campaign recognizes that awareness also means educating men, potential perpetrators.

Image Credit: We Can Stop It

The point of "We Can Stop It" is to make men take pride in the fact that they can inspire other men to make responsible, respectful choices. The monthlong campaign is also trying to highlight changes in Scotland's sexual offense laws surrounding the definition of consent and recognition of male rape.

Most of the campaign's material features men asking rhetorical-type questions such as, "I know when she's asleep it's a NO. Do you?" and "I'm the kind of guy who doesn't pressurize his girlfriend to have sex. Do you?"

In another nod to modernizing definitions of sexual assault, the initiative is inclusive of the gay community, emphasizing that men can be victims of rape as well.

Image Credit: We Can Stop It

Anti-rape campaigns have been getting it wrong for a long time — targeting only females, blaming victims for getting too drunk and implying that it is the woman's responsibility to avoid being raped. One Pennsylvania Liquor Control Board advertisement made the case that teen drinking is the reason girls wind up on a bathroom floor and get date raped. Their tag line was "She didn't want to do it but couldn't say no," somehow suggesting that alcohol abuse might be the problem.

Previous campaigns in the United Kingdom also emphasized the "what women are doing wrong" narrative, suggesting certain behaviors were putting themselves at risk.

With all that as a backdrop, Police Scotland's initiative represents a breath of fresh air. Their tagline "Together we can stop rape" puts the responsibility to prevent rape on men but also notes that they can take pride in being part of the solution.