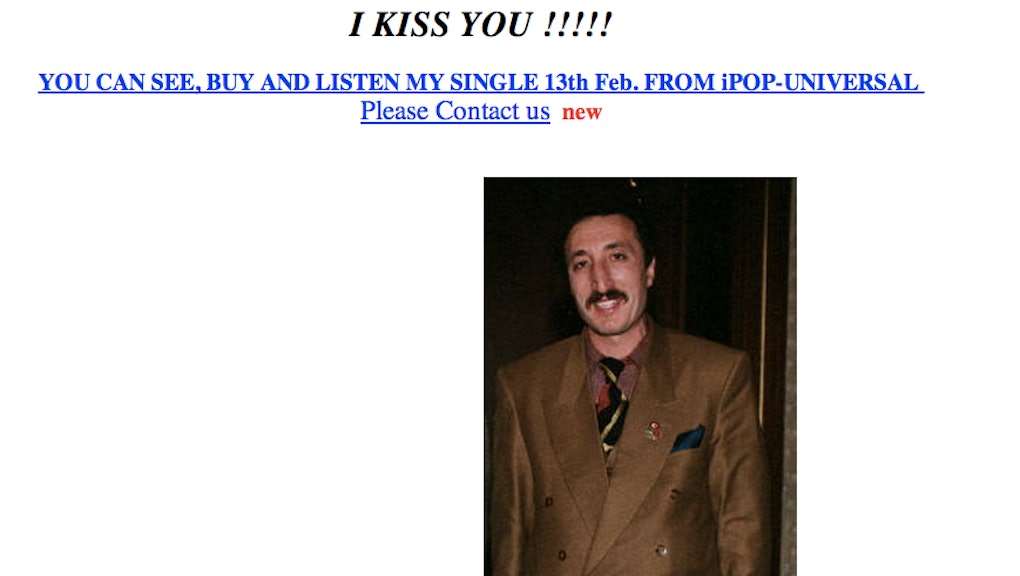 We live in an age of viral superstars — from one hit wonder Rebecca Black, to Grumpy Cat, everyone's favorite angry feline.

But do you remember the first Internet celebrity? I'm thinking way back before even Tay Zonday (of "Chocolate Rain" fame), or the dramatic chipmunk. This week was the Internet's 25th birthday, and I couldn't help but think about one of the first online celebrities: Mahir Cagri. His name might not ring a bell, but his website might:

Cagri, a journalist, made a website called "ikissyou.org," which had that delightful geocities chic that we all remember. It was a simple page with photos and descriptions of himelf and his interests, which include a fondness for travel, photography and — sex. (Although he claimed that "I like sex" was added to his page by a hacker.)

His photos showed him as a man of fun and leisure playing ping pong, lounging around in a red Speedo and playing the accordian:

The tall, multilingual Turkish hunk was using the page to meet a lucky foreign woman who might want to stay with him at his home in beautiful Izmir.

Back in 1999, his page's superstar status led to its parodies on late night American television, a British commercial for Cagri and a spot on Forbes' Top 100 list. He had fans from around the world including some famous ones like Roseanne Barr Kenny G and Bill Gates.

He even had a short-lived pop career with a single entitled "I Kiss You," based on the website's title.

If you don't necessarily remember Cagri, he might remind you of someone:

And that's no coincidence: Borat's love for ping pong, his catchphrase of "I like sex!" and his penchant for wearing speedos all seem to be pieced together from the things that made Cagri such a loveable hit.

The viral superstar definitely took notice, and condemned comedian Sasha Baron Cohen for using his image for his blockbuster hit Borat, since he was never asked for permission:

Cohen denied the claims, saying that the inspiration for the character actually came from a doctor he met in southern Russia. It's unclear which came first: Cagri's website or Cohen's awkwardly dressed Albanian journalist "Christo," the comedic character that eventually became Borat.

Cagri threatened legal action against the comedian when the film was released. He sought an apology and money from Cohen for using his likeness. But mostly, it seems, the ordeal left him powerless against a Hollywood heavyweight.

While it's unclear whether or not Borat was based on Cagri's character, there were enough controversies tied to the film to make it a possibility.

Borat, which brought in $261,572,744 worldwide, also drew anger from the film's unwitting participants including the citizens of the impoverished Romanian village of Glod, which was used as Borat's ficticious hometown in Kazakhstan. The villagers not only felt humiliated by the film, but also exploited. One resident, Nicolae Tudorache, told the Daily Mail that they were "conned," and said, "They made millions, but only paid us about £3 (approximately $5)."

In 2006, a judge told the villagers' lawyer to refile the case, since their allegations against Cohen weren't very clear.

Meanwhile, Esma Redzepova, a well-known Macedonian Romani singer, pursued legal action after claiming that the movie used her song without her permission. She received compensation after it turned out that Cohen had, in fact, recevied permission from her production house.

Fast forward to 2013, and it looks like Cagri hasn't let the Borat ordeal stop him. According to his Facebook page, he's coming out with a movie "soon":

And according to his official website, it looks like he's putting together a mystical philosophy book together:

While Cagri's 15 minutes of fame might be long gone, it's always nice to remember the man who completely owned (and pioneered) being a viral online star.