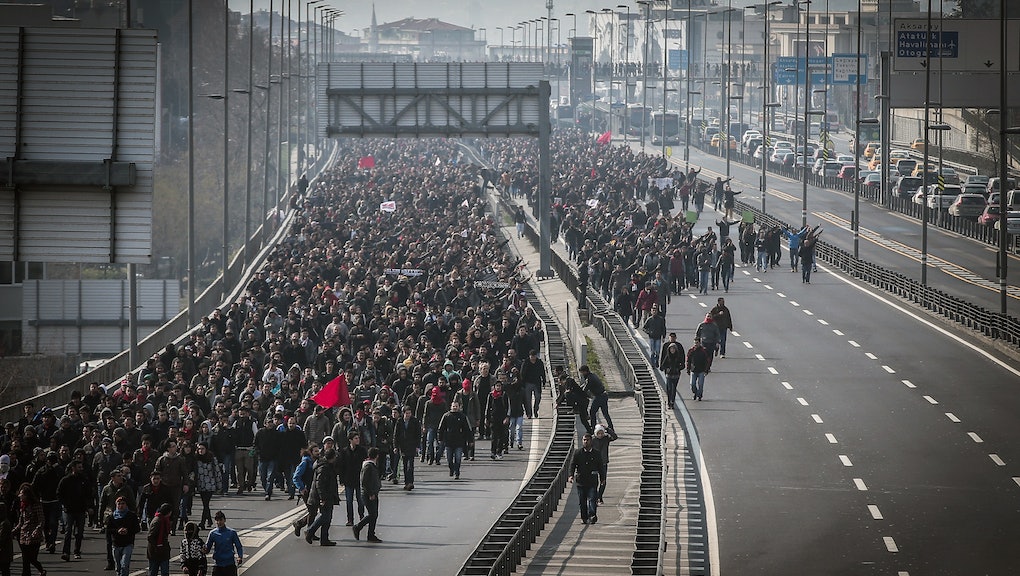 A fresh new wave of protests is rocking Turkey, as tens of thousands march on the streets to demonstrate against the government. But unlike what's going on in Ukraine and Venezuela, the protests in Turkey mark a second, renewed round of protests that began last summer. If you have not caught up on the latest developments, or don't know what the people are protesting about, here are 11 photos that sum up what's been happening on the ground:

Protests began with the death of a teenager named Berkin Elvan, who was in a nine-month coma after being injured during last year's government rallies. Thousands attended his funeral in Istanbul and marched in the streets afterwards.

Tens of thousands are also protesting across Turkey, especially in big cities such as Ankara and Izmir.

The government's response has been to send riot police to clash with the protesters. The tactics have mostly been restricted to tear gas, water cannons and beatings.

It seems that police may have forgotten that's how Elvan died — he suffered a head injury when he was hit in the head with a tear gas canister. He was passing by the protests to go buy bread for his family.

On Wednesday, a protester died from a head injury while a police officer also passed away from a heart attack

Around 36 children were arrested in Ankara for protesting on the streets. Over a hundred people were also arrested in Izmir.

Students across the country are also organizing school boycotts and sit-ins.

Protests began last year over the development of Gezi Park in Istanbul, although it quickly spread into a widespread anti-government demonstration.

Prime Minister Recep Tayyip Erdogan has yet to comment on Elvan's death.

Turkey will hold local elections on Mar. 30. Erdogan has promised to step down if his ruling AK Party loses power.