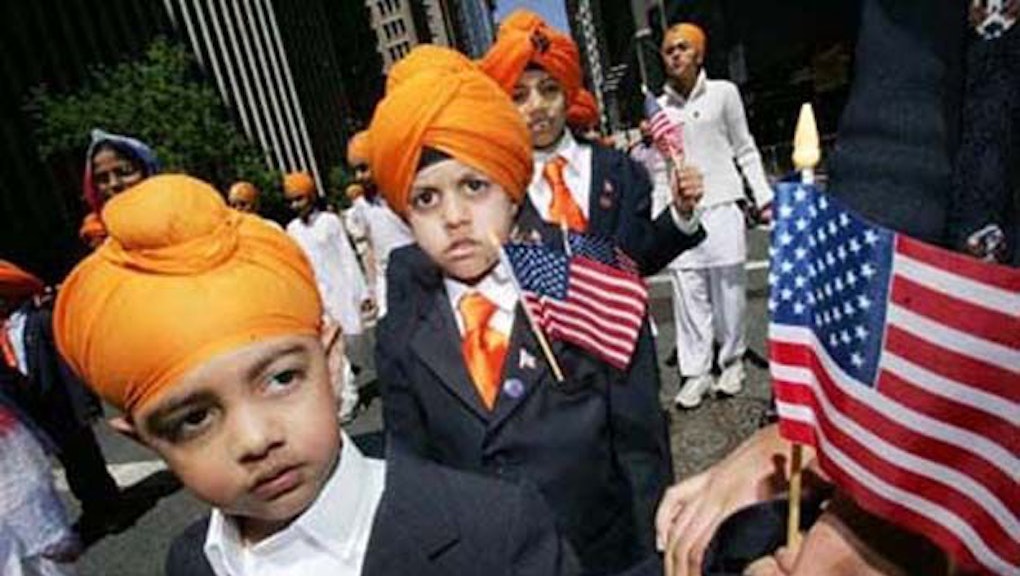 Over 50% of Sikh Children Are Bullied in School, Simply Because of Their Faith

Children who wear traditional religious garb are twice as likely to be bullied than their less conspicuous peers, a new report shows.

Over 50% of Sikh children endure school bullying, according to a study from the Sikh Coalition of more than 700 Sikh students in Massachusetts, Indiana, Washington and California. It's even worse for Sikhs who wear a turban, where a staggering 67% of whom report being bullied.

That's a significant jump from the estimated rates of bullying in the U.S. The National Center for Education Statistics states that around 32% of all teenage students report being bullied in school, while the 2011 Youth Risk Behavior Surveillance System (from the Centers for Disease Control and Prevention) has an even lower estimation of around 20%.

Sikh children are being tormented by other students who make fun of and rip off their turbans, hurl names such as "terrorist" and "Bin Laden" at them, and tell them to "Go back to their country."

One student, known as L Singh in the report, recounts his experience being, along with his brother, the only Sikh in a California school. He wore his hair uncut in a topknot, and used to leave school in tears every day after being picked on by classmates. After two years, his mother visited the school, but that made no difference. "Teachers were racist out there," he said.

Eventually, his parents took him to the barber shop, where he took off his turban and cut his hair. Sing remembers his mother and father were crying. But again it made little difference. He was still bullied so badly that the family had to relocate to Indiana.

For a Sikh, cutting the hair is seen as "the most grievous injury," the director of the Sikh Coalition, Amardeep Singh, told Al Jazeera. "It's like cutting your arm off, or a leg. Sikh history is replete with stories of Sikhs literally choosing death over having a haircut."

There are more than 25 million Sikhs in the world, making Sikhism the fifth-largest religion. It's tricky to determine the size of the U.S. Sikh population, because the census does not enquire about religion, but the Pew Research Center estimates that there are 200,000 American Sikhs, while the World Religion Database at Boston University has this number at 280,000.

Sikhs have lived in the U.S. for more than a century, according to the report, but have faced extra antagonism in the last decade, since 9/11 shook America.

"Brown skin and turbans have popularly become associated with terror," the study explains. "Crude popular culture stereotypes of terrorists and damaging media images outside the classroom have made their way into the classroom, to the detriment of young Sikhs."

It's also not just a school problem, as Sikh adults face hate crimes, workplace discrimination and mistreatment at airports. Last August — one year after a gunman killed six people at a Sikh temple in Oak Creek, Wisc. — the U.S. Department of Justice said it would begin tracking hate crimes against Sikh-Americans for the first time in history.

But the classroom is an important place to start. The report calls on Congress to prioritize the passage of the Safe Schools Improvement Act, which would require public schools to implement anti-harassment codes of conduct and report data on bullying to the Department of Education. It also wants to see inaccurate and inflammatory information about Sikhs — including "extraneous references to Sikh terrorists'" — removed from school text books.

That seems like a reasonable request, when more than half of Sikh children are being bullied.