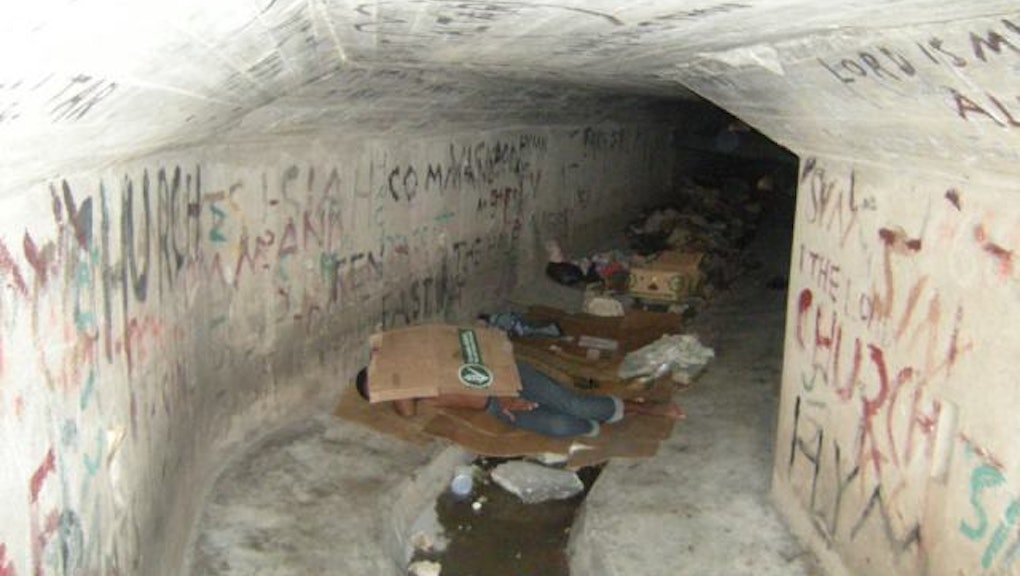 This Image Sums Up the Crisis Jamaica's LGBT Teens Are Facing

On March 7, a judge in New Kingston, Jamaica fined a group of teenagers for cursing in public.

It was a minor offense and seems rather antiquated. But it came with a more important ruling: the judge deemed the city’s sewers a “public space.” This means the teenagers – all of whom are LGBT – are legally allowed to continue living there.

It’s a small victory for an oppressed minority given few other options. According to Dwayne’s House, a support center for homeless LGBT youth, Jamaica’s “culture of homophobia” prompts many parents to throw their “gay or transgender” children onto the streets. Many are forced into prostitution to survive. Some are as young as 12.

This ruling stems from a specific incident. On March 5, New Kingston police raided a local sewer and tried forcing the inhabitants out. “The youngsters were understandably upset,” said activist Yvonne McCalla-Sobers, “and some put up quite a struggle as they literally have nowhere else to go.”

She added: “Police had already chased them from every abandoned building they previously occupied and the buildings were then torn down. The kids are afraid of going to the few government shelters because of the abuse they experience there.”

These youth were charged with violating Jamaica’s "badword law" for swearing during the confrontation, and Dwayne’s House paid the fines. But in the grand scheme, they got off easy: Jamaica is one of 82 nations with legal bans on homosexuality. The Offences Against the Person Act (OAPA) punishes men with up to two years in prison for committing “gross indecency with another male person.” Sodomy can earn 10 years hard labor.

But the laws are only part of the problem. Social stigma is bolstered by the Jamaican media, which paints a "distorted image" of the LGBT population as “rowdy” and “criminal,” according to activist groups.

To make matters worse, BuzzFeed reports a significant uptick in violence against Jamaica’s LGBT community in recent years. This culminated in July, when a transgendered 16-year-old named Dwayne Jones was hacked to death by a mob in Montego Bay. His crime? Dancing with a man who didn’t know he had been “born male.”

Some speculate that such violence is retaliation for heightened LGBT visibility. But whatever the reason, the Jamaican Forum for Lesbians, All-Sexuals, and Gays (J-FLAG) has counted 231 reports of violence and discrimination against LGBT Jamaicans between 2009 and 2012. That number has only risen since then, and includes frequent police harassment despite specific anti-discrimination “directives” from law enforcement officials.

“It is clear that there is a lot of work that needs to be done,” says lawyer and LGBT rights advocate Maurice Tomlinson, “in order for [the police] to respect and support the human rights of vulnerable gay Jamaicans.”

A global issue. Homelessness among LGBT youth is certainly not unique: In the U.S. alone, around 40% of homeless young people identify as LGBT, according to a 2012 Williams Institute study. That number might be larger, considering it relies on participants’ willingness to “identify” as such. Forty-six percent of these youth ran away from home because of “family rejection”; 43% were “forced out by parents because of sexual orientation or gender identity.”

Jamaican youngsters face similar challenges, and turn to dangerous means for survival. Some get involved in petty crime, including thievery and burglary. Many who engage in sex work are paid extra to have intercourse without condoms, putting them at greater risk of contracting STIs like HIV/AIDS.

Awareness of these issues is being raised globally, but much work remains to be done. And despite these troubling instances, there has been progress. For example,  “pockets of tolerance” in Jamaica have grown recently, as evidenced by news outlets’ increased willingness to report on LGBT issues, according to Reuters. Additionally, in September, angry gay rights protesters greeted Prime Minister Portia Simpson Miller when she attended a United Nations General Assembly meeting in New York, shouting: “Shame on you, Portia. Gay rights, human rights.” The Jamaican government even plans to “test the waters” and conduct a parliamentary “non-binding conscience vote” on repealing the Offences Against the Person Act.

But for those who suffer daily, change can’t come fast enough. Countless LGBT Jamaicans have been forced into exile, while many more suffer violence and discrimination at home. Activists and organizations like Dwayne’s House are working tirelessly to gain justice for this oppressed population. But they’re fighting an uphill battle.

Until significant concrete steps are taken, this oppression will continue. And increasing numbers of LGBT youth will be forced onto the streets.