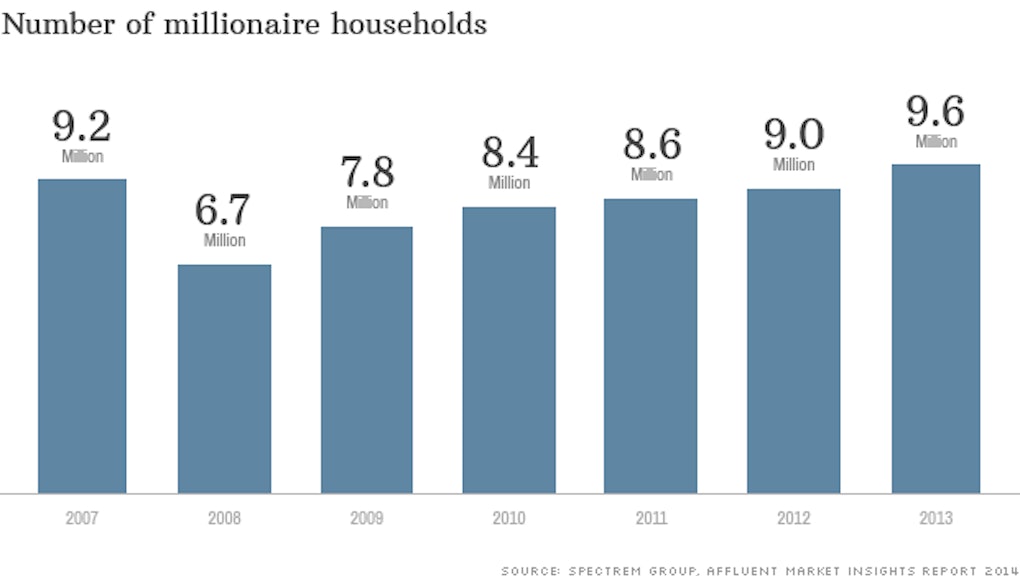 Wrap it up, economic recovery — you're done. Or at least you're done for the richest Americans. The number of U.S. households with a net wealth of $1 million or more (excluding their primary residence) has risen to the highest level in American history, with 9.63 million households celebrating the $1 million mark.

It's the highest number of U.S. millionaires in six years, since directly before the 2007 recession. While that's great for them, though, it's not necessarily good news for the rest of us. According to the Census Bureau, the bottom 40% of households have seen their income decrease approximately 9% over the same time period. Part of this is because when Congress formulates economic policy, it doesn't really care whether the economic fallout is on the average American so long as services for the wealthy are uninterrupted. And whenever the economy nose-dives, Congress's solution is to demand extensive cuts to government programs which tend to benefit the middle class and below. Just take sequestration, which disproportionately impacted the poor. ThinkProgress, for example, reports that the impact of the Great Recession was to double the wealth gap between whites and blacks.

Even the moderately well-off aren't doing as well as they were before the recession. The number of households worth $500,000 sits at 15.3 million, well below the 2007 peak of 15.7 million. Money isn't trickling down. It's being sucked up.

"Because of their levels of wealth, they increased their exposure to equities during the downturn and were making investments in real estate when the market was at the bottom," Spectrem Group president George Walper, Jr. told CNN Money. "That's why now they've benefited the most from the return in the economy."

Maybe that's why Millennials and Baby Boomers are beginning to agree that the future is bleak.