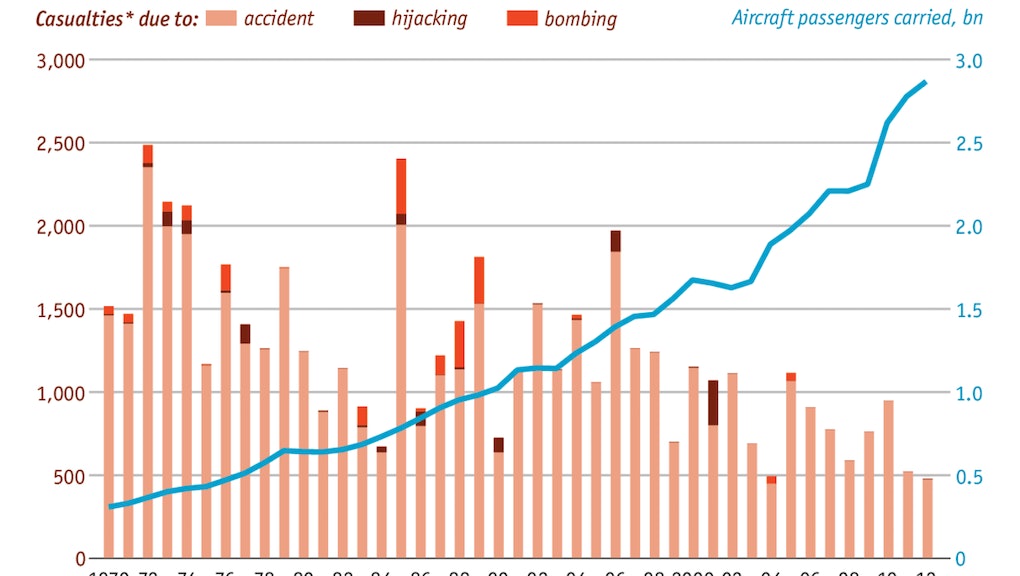 The disappearance of Malaysia Airlines Flight 370 has people asking a lot of questions about the beleaguered flight, its human cargo of 239 passengers and crew, and air safety. Fortunately, whether or not you should be worried about your next flight isn't one of them.

This chart from The Economist highlights just how safe air travel has become, with the total number of fatalities from accidents, hijackings, and bombings falling dramatically over the past 40 years. According to the National Safety Council, you're 180x as likely to die in a car accident than you are in a plane.

Even as yearly air passengers have risen from the hundreds of millions in 1970 to nearly 3 billion a year in 2012, the number of fatalities has pretty steadily dropped, even when accounting for outlier events that dramatically increased the number of fatalities in a given year. And why shouldn't they have? Between computerization, better-equipped air traffic control facilities, more safety features on planes, and other technological and organizational improvements, air travel has gotten the safest it's ever been.

The history of aviation is filled with horrific accidents. But you now have a 1-in-11 million chance of dying in an airplane crash. You're more likely to die in the terminal than you are in the air, or even driving there.

Or as Ask the Pilot's Patrick Smith writes, air travel is now so safe that when something goes terribly wrong, it's usually due to some strange and unforeseeable occurrence.

The "weirdness of [the disappearance of Malaysia Airlines Flight 370] speaks to how well we have engineered away what once were the most common causes of crashes," Smith writes.