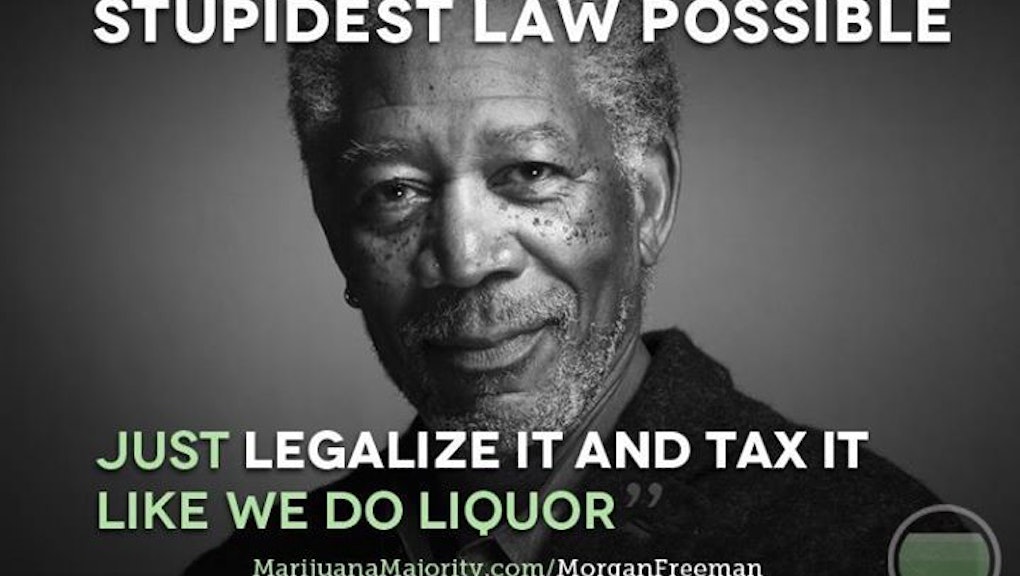 15 Extremely Powerful People Who Think Pot Should Be Legalized

As the marijuana legalization movement grows across the country, more and more prominent figures are voicing their support. In 2012, actor Morgan Freeman spoke out in favor of decriminalizing marijuana, arguing that we should "just legalize it and tax it like we do liquor."

While pot has many celebrity fans from Willie Nelson to Snoop Dogg, several political figures, journalists and business leaders have also gone on the record to support legalization. Marijuana Majority has compiled a list of American thought leaders who believe that marijuana should be legalized. Here are 15 of the biggest names:

"Our nearly century-long experiment in banning marijuana has failed as abysmally as Prohibition did ... In contrast, legalizing and taxing marijuana would bring in substantial sums that could be used to pay for schools, libraries or early childhood education." - New York Times

"Middle-class kids don't get locked up for smoking pot, and poor kids do... We should not be locking up kids or individual users for long stretches of jail time when some of the folks who are writing those laws have probably done the same thing. It's important for [the legalization of marijuana in Colorado and Washington] to go forward because it's important for society not to have a situation in which a large portion of people have at one time or another broken the law and only a select few get punished." - The New Yorker

3. Richard Posner, federal judge on U.S. Court of Appeals for the Seventh Circuit

"I think it really absurd to be criminalizing possession or use or distribution of marijuana. I can't see any difference between that and cigarettes. But also I'm skeptical about the other drug laws ... The notion of using the criminal law as the primary means of dealing with a problem of addiction, of misuse, of ingesting dangerous drugs, I don't think that's sensible at all. That is responsible for a high percentage of our prisoners. And these punishments are often very, very severe ... It's all very expensive, and it's a waste of a lot of high quality legal minds, but it's also a waste of people's lives who could be as least moderately productive with having to spend year after year in prison. That is a serious problem." - Lecture at Elmhurst College

"Marijuana decriminalization is an issue that will undoubtedly become more prevalent over time...The U.S. already has the highest incarceration rate in the world. We lock up the majority of inmates for non-violent drug-related crimes. Instead of attacking the consumers, we should give them alternatives to poverty and street life to steer them away from drug abuse in the first place. It simply doesn't make sense to waste billions of dollars putting hundreds of thousands of Americans in prison for non-violent offenses of the law." - Politico

"[Letting states legalize marijuana] would free federal law enforcement resources for the more urgent tasks of thwarting, apprehending, and prosecuting international terrorists or murderers ... [A]s a matter of States' rights, regulating marijuana and alcohol seem indistinguishable; and, alcohol policy has been entrusted to the States since the repeal of Prohibition in 1933." - Letter to Congress

"Marijuana accounts for one-half of all drug arrests in the U.S.; decriminalizing it would save millions that could be used to treat addicts rather than arrest kids ... Why not take drug addiction out of the criminal justice system and treat it in the public health system?" - Chicago Sun-Times

"Why, with record federal deficits and states teetering on the edge of bankruptcy, are we spending billions on yet another failed Prohibition that is accomplishing nothing other than making criminals out of millions of otherwise law-abiding citizens and fueling drug cartels that threaten our fundamental national security? ... Despite lip-service, about the need for treatment, harm-reduction and other strategies to address drug use as a health issue, why do the federal government's actual policies and budget still treat the situation as almost entirely a law enforcement problem? Let's end the unworkable marijuana prohibition and put our money where our mouth is. Let's solve the problems like border crime. We can do it with pot legalization." - Huffington Post

"We can use our resources so much better, and I think we need to legalize marijuana for adults and tax it so we can use the money for much better things ... It would reduce the money that goes to the drug cartels in Mexico." - CNN

"I think that most small amounts of marijuana have been decriminalized in some places, and should be. We really need a re-examination of our entire policy on imprisonment." - Rolling Stone

"It's not just the over $8 billion that we would be saving in law enforcement; it's also the over $8 billion that we would be making by taxing marijuana ... We are filling our jails with nonviolent drug offenders, predominantly young, predominantly African American ... It's a great beyond left and right issue. It has support across the political spectrum and also the support of the majority of the American people." - CNN

"[Marijuana] doesn't have a high potential for abuse, and there are very legitimate medical applications. In fact, sometimes marijuana is the only thing that works ... [I]t is irresponsible not to provide the best care we can as a medical community, care that could involve marijuana. We have been terribly and systematically misled for nearly 70 years in the United States, and I apologize for my own role in that." - CNN

"With calls for Congress to end the federal war on marijuana, it's currently estimated that the annual revenue that would be raised in California if it taxed and regulated the sale of marijuana would be $1,400,000,000! The work that could be done with those funds in providing a progressive approach could have an incredibly positive impact on those communities worst affected."- Virgin blog

"There have been calls for Obama to take a softer line on state-level legalization of marijuana or even to stand for legalization himself. Indeed, there is no small amount of inconsistency in our black president's either ignoring or upholding harsh drug laws that every day injure the prospects of young black men — laws that could have ended his own, had he been of another social class and arrested for the marijuana use he openly discusses." - Atlantic

"[Under marijuana legalization, drug traffickers] are going to make a lot less money, and some of the perverse things about the illegal drug trade will be avoided." - Buzzfeed