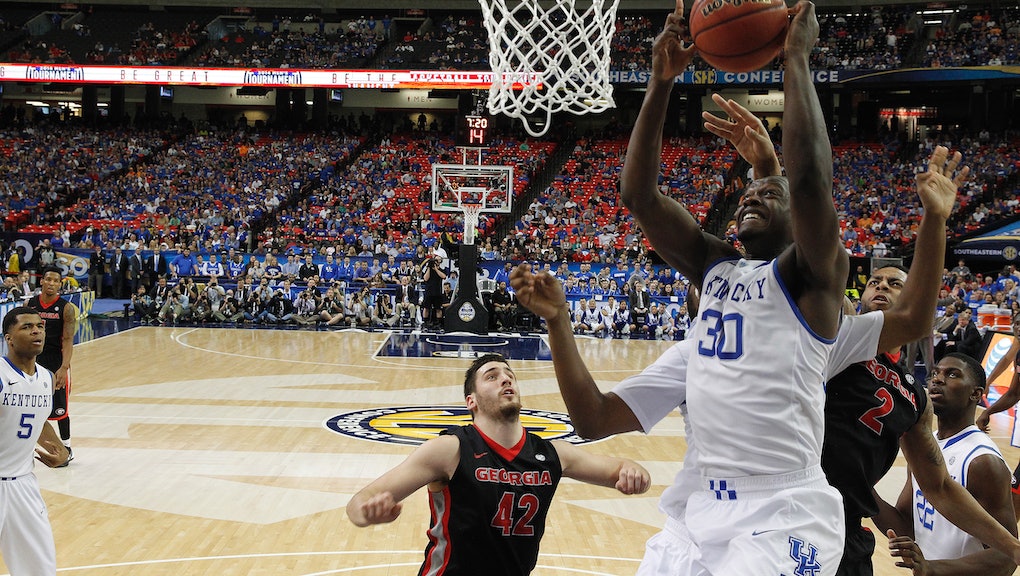 Mathematicians Have Determined Your Odds of Picking the Perfect NCAA Bracket

It's March again, which means it's time for the NCAA Men's Division I basketball championship, also known as March Madness. These are some of the most exciting three weeks in all of sports, professional or otherwise, and every year millions of fans tune into every game hoping to see something magical — and they're usually not disappointed. But a lot of fans also tune in for another reason: to see how well they picked their bracket.

For those unfamiliar with March Madness, 64 NCAA basketball teams compete their way through a bracket hoping to make it to the final game and be crowned the champion of college basketball. Part of the fun is predicting who will win and betting a lot of money on how things will play out. It's fun, but it's also very difficult — so much so that billionaire Warren Buffet, in partnership with Quicken Loans, has pledged to award anyone who fills out a perfect bracket with $1 billion. That's right, billion ... not million.

You're probably thinking that you want to get involved for a chance to win the big money. How hard could filling out a perfect bracket be? Well, it's actually almost impossible.

The math: Duke University mathematics professor Ezra Miller reportedly claimed that the odds of selecting a perfect bracket are roughly 1 in 10 pentillion, or 1 in 10 billion billion. It's not exactly clear how Miller arrived at that number, but the figure is fairly close to one reported by DePaul University math professor Jeff Bergen, who in 2012 posted a YouTube video arguing that the odds for the perfect bracket came to about 1 in 9,223,372,036,854,775,808 or 1 in 9.2 quintillion. According to Bergen, because there are 63 games in the tournament, and there are two outcomes for each game, the way to determine your odds equals 2^63, or 9.2 quintillion. This number is based only on the official 64-game bracket, and excludes the additional four teams that have to play their way in — if you included those, the number would jump to 1 in 2^67, which would equal about 1 in 147,573,952,589,676,412,928, or 1 in 147 quintillion.

However, the figures are basically based off the idea that every game is like a flip of a coin — that there's no way to predict who might win. But this isn't totally true. While there have been plenty of crazy upsets in tournament history, you can usually bet that a higher seeded team will beat a lower seeded team — for example, never in tournament history has a no. 16 seed beat a no. 1 seed. So, if you have a bit of basketball acumen, you can make guesses that are more educated than a 50/50 coin flip. If you know something about basketball, Bergen believes you can improve your odds to 1 in 128 billion. However, those odds are still insanely unlikely — you're 500 times more likely to win the lottery. But what if you're really good at picking winners and can get it right 75% of the time (although that's practically unheard of — earlier this year, Sports Illustrated's Seth Davis was 36 of 50 or just 72%). If somehow you had that amazing percentage, your odds would be (3/4)^63, or about 1 in 74 million.

Maybe you're just better off doing something like these guys: