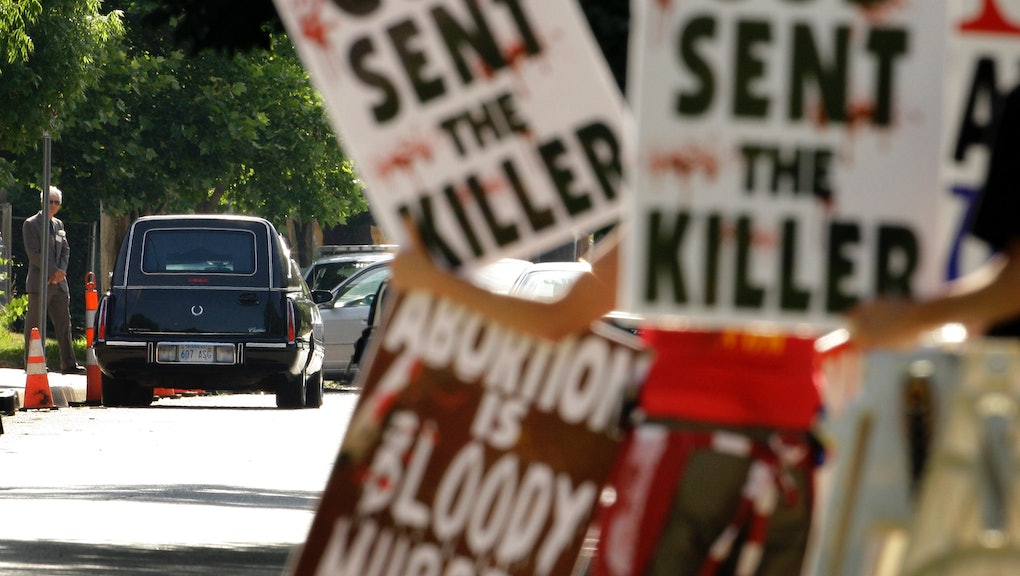 The Creator Of Westboro Baptist Used to Be a Die-Hard Civil Rights Fighter — What Happened?

Reverend Fred Phelps, the founder of the notorious Westboro Baptist Church, is reportedly "on the edge of death" at a hospice in Kansas.

In case your memory needs refreshing, Phelps is best known for organizing protests at the funerals of anti-LGBT hate crime victims, soldiers, and celebrities under the slogan "God Hates Fags."

He also used to be a champion of civil rights.

That may be hard to believe now, but the evidence is undeniable. After moving to Topeka in 1954, Phelps developed a reputation for taking civil rights cases that other attorneys — black as well as white — refused handle. As fellow Kansas civil rights activist Jack Alexander later explained, most lawyers believed that anti-discrimination cases were risky because of "the chance they wouldn't get paid." Not only was Phelps an exception to that rule, but his reputation as a lawyer reached the point that he became the go-to litigator for victims of racist persecution. His most prominent cases included that of a black student who Phelps claimed was receiving an inferior education in Topeka schools, a class-action lawsuit against an elementary school for discriminating against non-white students, and a defense of the Jordan-Patterson American Legion Post after it was raided by law enforcement officers who had racially profiled its members.

Even after he received numerous threats and had his windows shot out, Phelps persisted in his work, eventually becoming a prominent civil rights figure in the region. By 1987 he won an award from the Bonner Springs branch of the NAACP for his "steely determination for justice during his tenure as a civil rights attorney."

When asked years later about how her father could reconcile his past career with his current one, Phelps's daughter responded: "God never said it was an abomination to be black."

While it is unclear when Phelps began developing his vendetta against the LGBT community, the Reverend Ben Scott — who was president of the NAACP's Topeka branch at the time — attests that he not only never heard Phelps talk about homosexuality, but at the time "didn't even know he was a preacher."

While some have argued that Phelps merely took those cases to make money, that position has several weaknesses. For one thing, as Alexander pointed out, there was no guarantee that those civil rights cases would win, and considering that Kansas had a relatively small African American community, it's hard to see why an attorney with a purely mercenary mindset would have chosen that field. What's more, Phelps's subsequent career at Westboro hasn't exactly been marked by its profitability. While the argument that Phelps was a civil rights profiteer would hold up if he a subsequent pattern emerged of him "selling out," Phelps has actually paid significant financial costs (to say nothing of social stigma) as a result of his "God Hates Fags" campaign.

Finally, and most importantly, the idea that his subsequent hatemongering proves that his earlier heroism was insincere is far, far too convenient.

It is in our nature to believe that there is an impermeable dichotomy between what makes one person a "hero" and another one a "villain." As I've written before, it's easy to fall into the trap of believing that the good in an admired public figure outweighs the bad or that the bad negates the good. Although Americans have somewhat moved away from this simplistic tendency (most notably in the public's continued high regard for President Bill Clinton's legacy of peace and prosperity despite his highly-publicized sex scandal), there remains a strong reluctance to accept that good and evil can simultaneously reside within the same human soul.

Yet Phelps's life proves not only that they can co-exist, but that they often spring from the same source. As the philosopher Eric Hoffer explained in his classic sociological monograph The True Believer, individuals who invest their life's work in larger social causes often do so for psychological as well as ideological reasons. Regardless of the exact beliefs of the movements in question — whether they are religious or political, left-wing or right-wing, intellectual or visceral — people who become "true believers" in those causes frequently do so to fulfill a variety of needs to both their egos and their ability to comprehend the dauntingly complex external world. Indeed, as Hoffer demonstrated, this fanatical personality type could be found behind causes ranging from Communism and Nazism to Christianity and Islam... with "true believers" able to flip from one point-of-view to a seemingly contradictory one precisely because their core psychological needs were still met.

Consequently, instead of viewing Phelps's earlier civil rights activism as an angel to his subsequent raging homophobe's devil, we should see them as different manifestations of a single root drive. We need to recognize that the same fervent conviction and inner belief system that can fuel the cause of justice can also be used to deny justice to others, even though the genesis of both those forces can sincerely hold that each is serving a righteous cause. While none of this excuses Phelps's irrationality or malevolence, it helps us see that everyone — progressives, conservatives, libertarians, centrists, Christians, Jews, Muslims, atheists — is capable of being both a hero and a monster. We all believe what we do as much out of pride and the need to be swept up by a "greater cause" as we do out of detached intellectual and moral analysis.

As America looks back on the scope of Phelps's life, my hope is that it will spark introspection among idealists of all stripes. I say this not as one who claims to be above such impulses — indeed, I have been guilty of knee-jerk idealism before and will almost certainly be guilty of it again — but because liberty is threatened most not by those who care too little, but by those who never scrutizine what they care about and why.