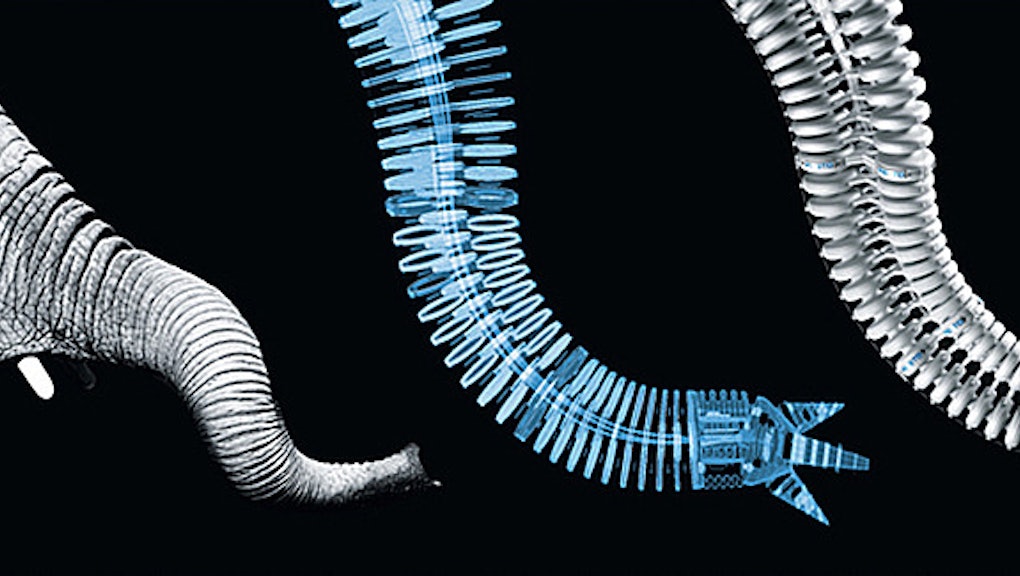 An Engineering Company Is Creating a Robot Army, Inspired by Nature

German engineering firm Festo is creating a robot army. Sounds scary, right? But there's no need to fear a "Skynet"-type apocalypse quite yet, because these robots want to do good by making laborious tasks easier in the factories of the future. And they're using nature as their inspiration.

Festo summarizes the motivation behind their research on their website: "Gripping, moving, controlling and measuring – nature performs all of these tasks instinctively, easily and efficiently. What could be more logical than to examine these natural phenomena and learn from them?"

It makes a lot of sense. Why reinvent the wheel when nature has already spent epochs perfecting the mechanics needed for survival on the Earth? This practice of bio-mimicry is widespread in other fields such as molecular biology, where many drugs are designed by optimizing already existing natural products from microorganisms.

What's really brilliant about this body of research is that while many of the designs have obvious practical applications, many others have been made in the creative spirit of learning, with some wild results. Check them out:

An elephant's trunk is flexible, transmits large forces, and its skin is a precise gripping tool. All of these physical characteristics are also valued in automated systems, so Festo built a bionic handling assistant using the elephant as a template. A fantastic idea, with the only downside being it's uncanny similarity to evil Spider-Man nemesis, Doctor Octopus.

Dragonflies are amazing creatures, with a key design strength: its four independently-controlled wings allow it to hover mid-air and fly in all directions including backwards. Festo have created a mechanical replica that's able to perform these same complex flight characteristics while being controlled with a smartphone.

Festo used the striking mechanics of jellyfish propulsion through water to create an mechanized flying version. It has a helium-filled ballonett for lift and is the first object in the history of aviation to use propulsion based on the principle of recoil.

Penguins have a talent for navigation and maneuvering through tight spaces. Festo's versions are designed as autonomous underwater vehicles that independently orient themselves and navigate through the water basin. There are also amazing flying versions! The tech used in the flexible head and tail regions, helped inform the design of practical assembly line robots.

Festo's flying version of a manta ray is inspired by its effortless maneuverability. It uses a beating wing drive for propulsion, and it can “swim” in the sea of air using the lift from the helium in a similar way to the manta ray in water.

These interactive walls are designed to change physical characteristics in response to humans. Their movement is based on the fins of fish through water and they also have a skin that can change in appearance dynamically. It's an interesting step towards the idea of emotive architecture, where the environment comes alive around you.

This machine is a pneumatic conveyor belt that can transport objects in a targeted manner and sort them at the same time.  It consists of numerous modules that deform the surface to move objects, in the same way that waves can carry objects through the water.

8. And the inevitable humanoid.

Taking the mechanical arm to the next level, this robot is a torso with two bionic arms and five-finger hands. The robot can perform programmed movements or be remote-controlled online.