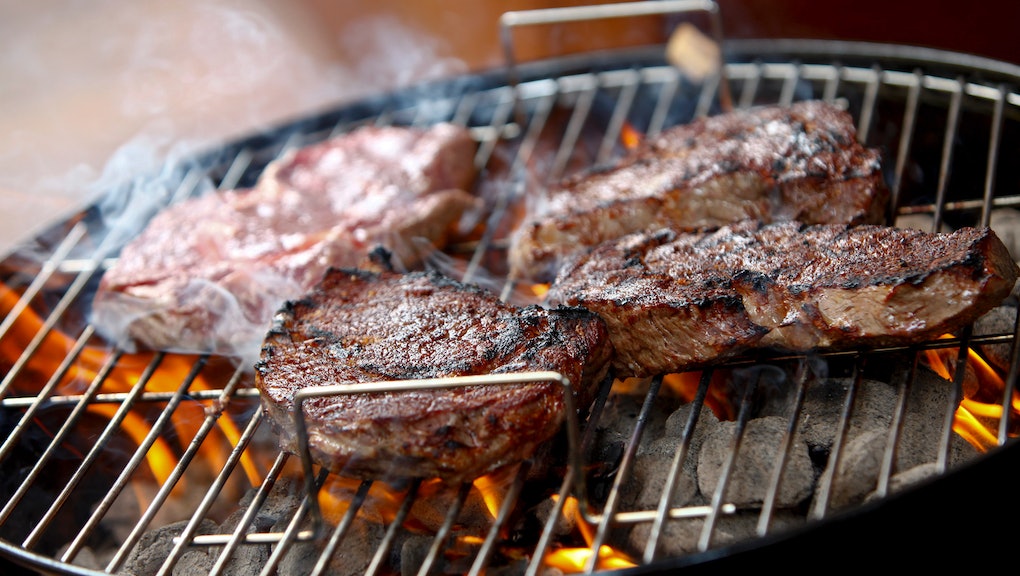 Eating Meat Won't Kill You, Despite What Some Scientists Say

The news: A recent study has prompted an onslaught of new concerns about meat consumption. Researchers reported significant associations between how much meat people eat and their risk of dying from all causes, especially cancer. But, before anyone starts substituting tofu for steak, there are major flaws in the study’s methodology that should put meat eaters’ minds at ease (for now).

Researchers from the University of Southern California grouped the 6,381 participants aged 50 and older into categories of “low protein,” “moderate protein” and “high protein” eaters. Using death records, they determined whether they were still alive 18 years later — and if not, what killed them.

For the 50-65 year-old age group, the authors found participants who reported eating a high protein diet had four times the risk of cancer death, as well as a 75% increase in risk of death from all other causes compared to their low-protein eating counterparts.

When the authors adjusted for type of protein, plant vs. animal, the high plant protein eaters still had three times the cancer risk, but their overall mortality risk disappeared.

While initially these results sound pretty scary, there are some fundamental weaknesses in the study that mean we shouldn’t take it too seriously. First, the participants’ overall diet was ascertained by asking them what they ate over 24 hours on one single day.  There was no follow up about later habits or eating choices. I don’t know about the rest of you, but one day of my diet doesn’t represent my overall dietary pattern in the last eighteen years (and research tends to agree).

Secondly, we know two things about self-reported eating data: people chronically underreport and inaccurately recall what they eat. (How many drinks per week did you list on your last doctor’s check-up?) Meaning, that even if that one-day did represent someone’s diet over eighteen years, people are not honest about how much or what they eat in the first place. To make matters worse, both of these problems are notoriously rampant in the dataset (NHANES III) used in the study — so much so that researchers published a paper concluding that 67% of participants in this dataset reported living on calorie intakes that are not physiologically plausible. Simply put, we have no idea what these people were really eating over the study period.

Another problem in claiming any type of causal relationship from these results is that this was an observational study. Contrary to the randomized controlled trial, observational studies should be used to "provide associations, not cause and effect evidence." This is because without random assignment of the exposure in question, even with fancy statistical models we can’t really pinpoint if it is our exposure that caused the disease.  This is especially important for nutritional epidemiology because we know from other studies that vegetarians are more health conscious to begin with. So in order to make conclusions about vegetarians versus meat eaters, researchers would need to compare people with the same habits that differ only (or at least close to only) in whether they eat meat or not. They did this here and here and concluded no difference in overall mortality between vegetarians and health conscious meat eaters.

The takeaway: So while the study certainly raises questions for future academic inquiry, it does not provide strong evidence for us to make sweeping dietary changes. Until better research is presented, we should be skeptical of the author’s suggestion that we switch to plant protein until retirement.