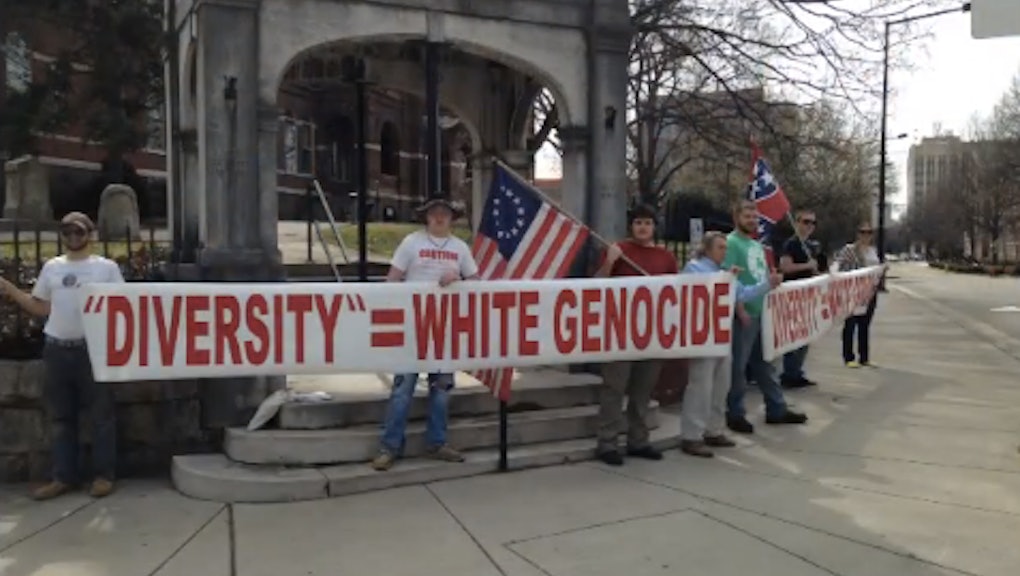 Massachusetts resident Kyle Hunt was so agonized by the entire world's problems being blamed on white men that he called for a march to raise awareness of a little-known phenomenon he likes to call "white genocide." Unfortunately for Hunt, the march ended up being more about the lack of support for his movement than "an international day for independent pro-White activism."

In fact, barely 10 people showed up Saturday for White Man March in Cincinnati. Holding signs touting racist and objectionable slogans such as "DIVERSITY = WHITE GENOCIDE," the protesters were very much in the minority.

"We are here promoting white interests and encouraging others to stand up for people advocating for the white majority, just like the minorities are encouraged to do," local organizer Robert Ransdell told the Cincinnati Enquirer.

In Birmingham, Ala., meanwhile, the handful of white pride banners erected Saturday were quickly taken down by local police.

"We don't want stuff like that," Birmingham Police Lt. Sean Edwards told AL.com. "We want to remove it quickly. We don't want to alarm the citizens. We don't welcome that type of mentality and behavior here."

And in Knoxville, Tenn., the handful of pro-white demonstrators became something of a tourist attraction for gawking citizens.

Probably the best thing to come out of the embarrassing affair was the quick social media response to the "pro-white activism." Within 24 hours of the event, close to 39,000 tweets were sent out using the hashtag #WhiteManMarchProtestSigns, generally skewering the organizers and their blatant racism.

You've got to hand it to Hunt's fellow racists, though: They appear not to be discouraged by the utter failure of their first attempt. On Hunt's website, a few users have asked when the next march will happen, hoping they won't "have to wait one full year before we get to do this again."

Perhaps the most compelling argument against the movement was made by its founder. Listening to Hunt attempt to justify white pride is enough to send almost anyone running in the opposite direction.