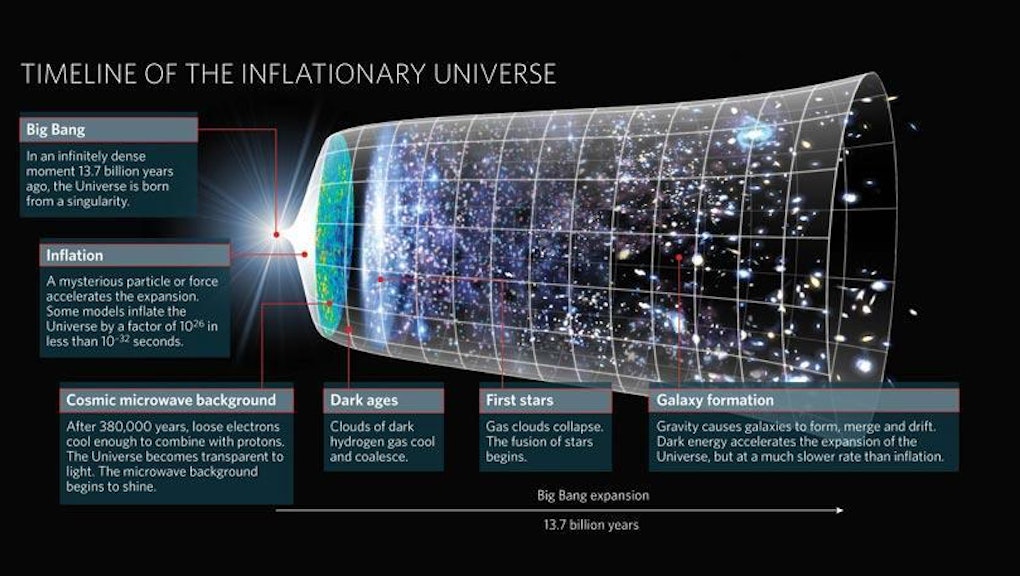 In a world-changing discovery, scientists have discovered the first direct physical evidence of the expansion of the universe in the microseconds following the birth of existence.

A team of Harvard-Smithsonian radio astronomers at the South Pole announced that they've discovered empirical evidence of gravitational waves showing the "universe ballooned out of the Big Bang due to a massive gravitational force generated by space itself." These gravitational waves created by the Big Bang are thought to have rippled throughout reality over the mere 10^-34 seconds required to expand the universe over 100 trillion trillion times. It's being called the biggest discovery in astrophysics in quite some time and has huge implications for our understanding of the universe and its creation.

So what do you need to know?

This graphic from NASA shows the timeline of the "inflationary universe," which the new discovery adds compelling evidence for:

Lead astrophysicist John M. Kovac and his team say their discovery of the waves, "ripples in space-time that travel outward from a source," is the first real evidence that the universe more or less bubbled itself into existence about 14 billion years ago. According to Space.com, gravitational waves were the last untested portion of Einstein's general theory of relativity.

The Harvard-Smithsonian team noticed these waves as faint signals in the cosmic microwave background (CMB) radiation that emanates throughout the known universe, and on closer inspection found this curling pattern in the polarization of the CMB:

Though the gravitational waves have themselves faded to the point where they are undetectable directly by current technology, the resulting pattern in the polarization of the CMB seen above is direct evidence of their existence.

"This is probably a direct image of gravitational waves across the entire sky, showing us the early universe," said Kovac. "We're very confident that the signal that we're seeing is real, and it's on the sky."

"It's going to be controversial. We can expect that people will try to shoot at it from every direction, and we invite that — that's the scientific process, and it'll be fun and interesting."

"I'm sure there will be lots of discussion about galactic foregrounds and whether they could possibly be fooling us, be totally different than we'd expected. But our paper goes into some detail on using all the best available models for what galactic foregrounds ought to look like, and why what we see doesn't look like that."

The discovery of the gravitational waves is particularly important because it's likely the only physical evidence of the Big Bang that's actually left in the modern universe. Writes LIGO (before the discovery):

If these gravitational waves truly originated in the Big Bang, these waves will have be stretched as the universe expanded and they can tell us about the very beginning of the universe — they would have been produced between approximately 10-36 to 10-32 seconds after the Big Bang, whereas the CMB was produced approximately 300,000 years after the Big Bang. The sound these gravitational waves would produce is a continuous noise (much like static) and will be same from every part of the sky (just like the CMB).

According to Scientific American's Clara Moskowitz, "the signal is coming through much more strongly than expected, ruling out a large class of inflation models and potentially pointing the way toward new theories of physics."

What mysterious form of energy powered cosmic inflation is still unknown — as it what the universe looked like before it was completely obliterated and reshaped by the Big Bang. But with this massive discovery, humanity has come one step closer to understanding the origin of the known universe.