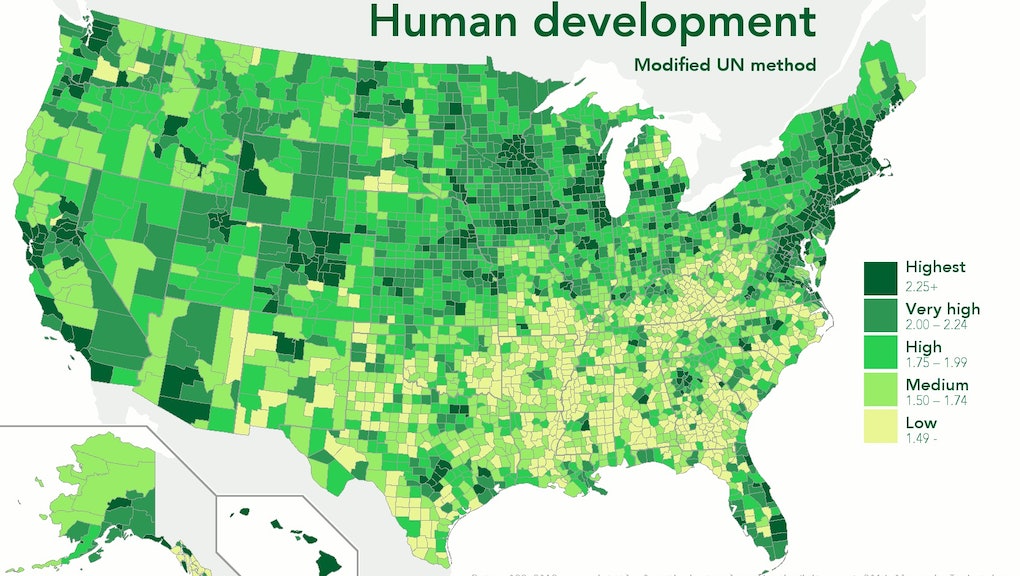 If the U.S. Were Graded Using the UN's Index For African Development, Here's What We'd See

Here's how the United States would look if it was measured on a county level by the same standards used to rank countries by the UN, the Human Development Index.

While much of the country scales up well — clocking in at highest, very high, and high development — swaths of the nation are under-developed and live in poverty. Those areas are predominantly in the American South, the rural mid-Atlantic, and Texas.

Redditor Alexandr Trubetskoy compiled the map using UN methodology (explained here) and U.S. Census Bureau data from the American Community Survey. The numbers are not comparable to those of other countries, only between areas of the United States. Five variables are taken into account: life expectancy, income per capita, school enrollment, percentage of high school graduates, and percentage of college graduates.

The results are nothing short of astonishing and show a remarkable picture of the way poverty and low quality of life are distributed across the continental United States.

Vast stretches of the South, outside of well-developed major cities, languish compared to the rest of the country. While the South is doing particularly poorly, all across the country rural areas suffer in comparison to the wealth concentrated in major cities. The biggest pockets of riches remain in the Northeast megalopolis, coastal California, and larger cities like Detroit and Chicago in the Great Lakes region.

Why does the South suffer so? It's been long enough that the Civil War can't be to blame. As Emily Cohn wrote in the Huffington Post, it might have a lot to do with conservative economic policy. Minimum wages are much lower, economic mobility is practically non-existent, and their state governments broadly rejected Medicaid expansion funds under Obamacare. The problem is also due to economic segregation (under which the poor rarely interact with the rich) which is also implicitly racial segregation, thanks to the way in which resources are distributed among the population. Slavery and Jim Crow created class distinctions between black and white Southerners which have proven difficult to move past, while working-class people of both races were disenfranchised by early, then continual attempts to suppress the labor movement.

This economic under-development is much of the reason the South has staggering obesity rates. They "have little access to healthy food and limited means with which to purchase it," as well as a climate which discourages exercise and poor options to choose from when they do.

What the South needs is a sustained national effort to improve its infrastructure and build the foundations of a stronger economy — massive investments in education, public services, and to fight intergenerational poverty. In other words, a Southern New Deal. It's too bad that seems very unlikely to happen.