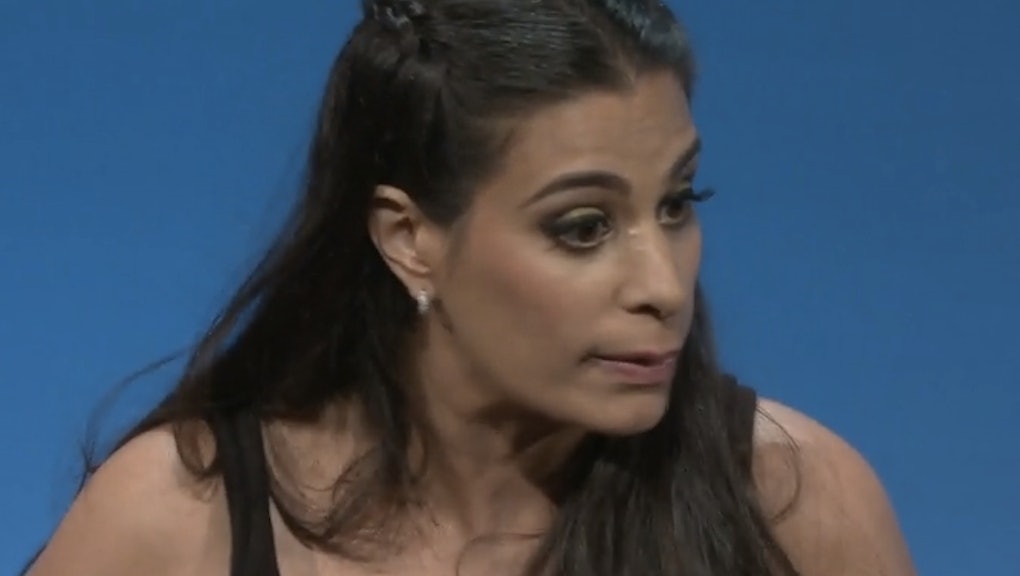 This Comedian Hilariously and Powerfully Destroys Stigmas About the 'Disabled'

Maysoon Zayid likes to say she's "got 99 problems, palsy is just one of them."

Although some people urge the American-Palestinian stand-up comic to use her cerebral palsy — a medical disorder where one of the effects is shaking noticeably — the feisty comedian refuses to play the disabled card.

Instead, Zayid has uses her amazing sense of humor and inspirational life story to destroy the stigmas that still surround people with disabilities. At a recent TED Talk, Zayid had the audience in stitches with her rapier wit and passion.

"If there was an Oppression Olympics, I would win the gold medal," she jokes. "I'm Palestinian, Muslim, I'm female, I'm disabled and I live in New Jersey."

By turns snarky and honest, Zayid speaks about how yoga has helped her. Before yoga, "I was a stand-up comedian who can't stand up," she jokes.

Much of the material for Zayid's act is gleaned from her immigrant background and home life. "My parents were afraid that if we didn't go back to Palestine every single summer, we'd grow up to be Madonna," she says in the TED Talk.

Her father tried to make her walk by dangling a dollar bill in front of her and making her chase it. "My inner stripper was very strong," Zayid jokes before taking a dig at the casual cruelty of the Internet. "The doctors said that I wouldn't walk, but I am here in front of you. However, if I grew up with social media, I don't think I would be."

In 2003, Zayid co-founded the New York Arab-American Comedy Festival in an attempt to mainstream Arab artists. But she says that endeavor wasn't half as tough as trying to get more people to respect individuals with disabilities because "disability is as visual as race. If a wheelchair user can't play Beyoncé, then Beyoncé can't play a wheelchair user."

She even raps about her favorite moment, when she got to perform "for the man who floats like a butterfly and stings like a bee, has Parkinson's and shakes just like me" — Ali.

By the end of her talk, Zayid has clearly made a strong impression on the audience.

"My name is Maysoon Zayid," she declares to applause. "And if I can can, you can can."