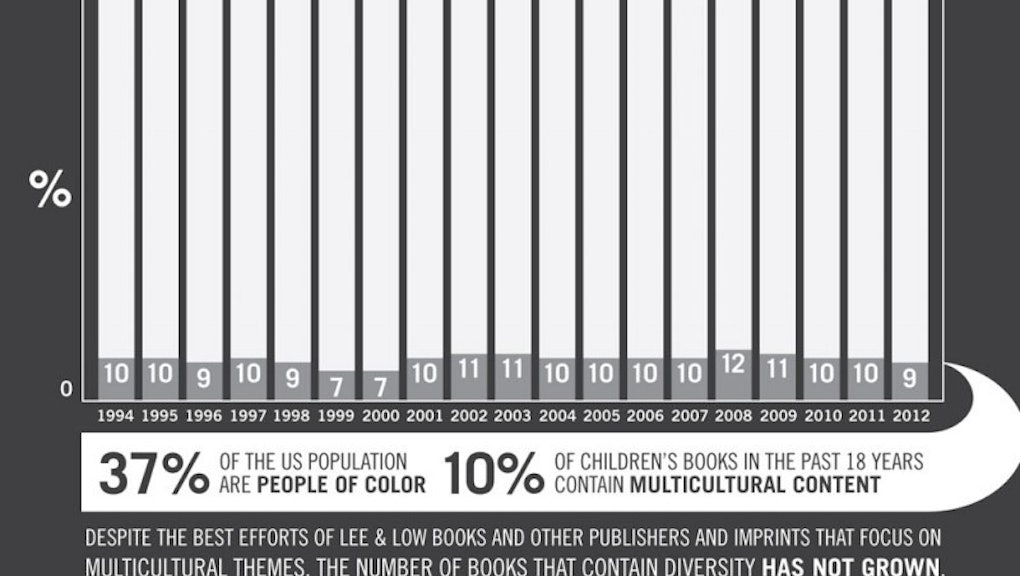 The Problem With America's Children's Books, in One Chart

Books are printed on white pages, and a new survey shows that their contents are similarly blanched. Last year, 3,200 children's books were published — and only 93 were about black characters.

And it's not a one-off problem. The Cooperative Children's Book Center School of Education at the University of Wisconsin-Madison has been collecting data on children's books written about people of color since 1994 — in the last 20 years, the ratio hasn't improved at all.

This infographic, by independent publisher Lee & Low Books, shows that the percentage of children's books by, and or about kids of color has hovered around the 10% mark consistently since the early '90s, despite that people of color comprise 37% of the U.S. population.

In the New York Times on Saturday, children's book author Walter Dean Myers pointed out the damage this lack of literary representation can cause. Books are an essential part of identity formation; they give their readers "a validation of their existence as human beings, an acknowledgment of their value by someone who understands who they are."

Myers recalled reading about Goldilocks, David and Goliath, and Robin Hood — but as a black kid in Harlem, he soon tired of reading about characters who weren't like him.

His son, Christopher Myers, also penned an op-ed for the New York Times and went so far as to claim this era represents an "apartheid of literature." He points out that books are not just mirrors, but maps. They teach people not only about themselves, but how to navigate their way in the world and how to relate to other people unlike them.

Without adequate representation in books, we are sending our children of color — and our white kids — out into the world without a proper instruction manual.

The study and the op-eds prompted the Twitter trend #colormyshelf, which people are using to share recommended reading lists for middle grade black boys, Asian kids, American-Indian children and young black girls, as well as compilations of anti-bias children's books and diverse YA novels.

By 2043, "minority" groups are expected to become the majority of the U.S. population. Hopefully by then, children's books will have turned a page toward a more diverse representation of the world they depict and the imagination they foster.