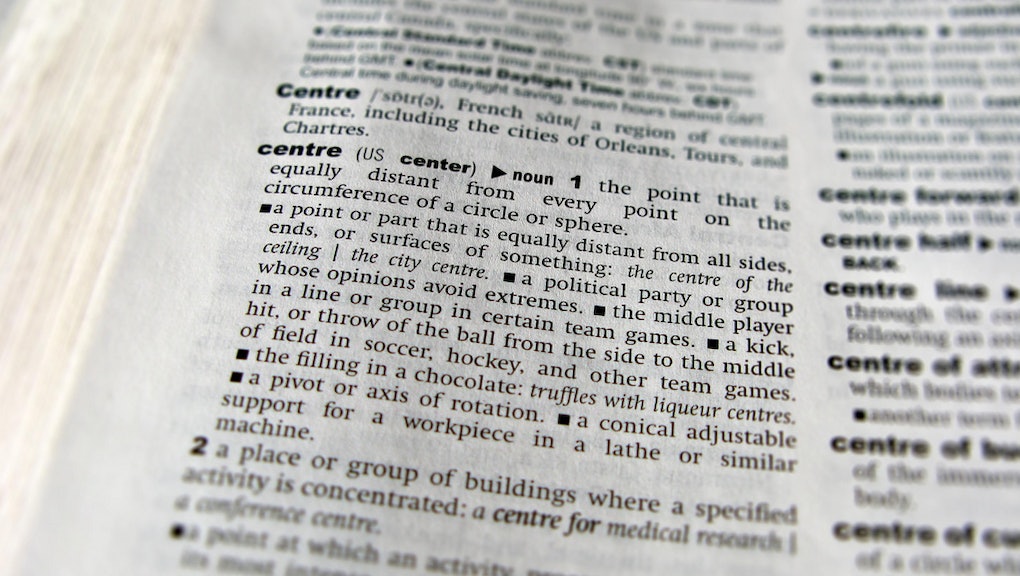 The Oxford English Dictionary — that respectable bastion of formal language — recently added about 900 new words to its lexicon. Hidden among them were four variations of a particularly infamous four-letter word beginning with C.

It's a bit of a surprise endorsement of sorts for a grouping of words still considered too offensive for some media outlets. However feminists who believe in reclaiming "cunt" can and are claiming this as a victory.

The word cunt (as an anatomical reference to a woman's genitals) has been listed in the Oxford English Dictionary since 1972, traced to an early usage in 1230 as a street in London's Red Light District called Gropecunte Lane. Although its early origins were technical rather than obscene, the word had gained some, well, etymological baggage by the 17th century.

In Hamlet, Shakespeare famously pens a witty back-and-forth between the title character and his sometime lover, Ophelia. When Ophelia rejects Hamlet's request to lie in her lap, he replies, "Do you think I meant country matters?" Shakespeare alludes to the c-word again in Twelfth Night, where the wordsmith has his puritanical character Malvolio read the word aloud when identifying the handwriting in a letter, saying, "There be her very Cs, her Us, and her Ts: and thus makes she her great Ps."

By the time A Classical Dictionary of the Vulgar Tongue was published in 1785, cunt was (re)branded negatively — and somewhat vaguely: "A nasty word for a nasty thing."

Some of feminism's biggest icons have long fought to end common use of the word. Catharine MacKinnon and Andrea Dworkin, both feminist stalwarts and iconic anti-pornography activists, denounce the word "cunt" for dehumanizing women by reducing them to a body part, to a mere sexual essence.

However the argument to reclaim the word as empowering is represented by women like Jezebel's Katie J.M. Baker, who argues that the only reason "cunt" still holds such shock-power is "because so many people still think the worst crime a woman can commit is to be unapologetically sexual." Cunt "conveys purposeful sexual power, not submission," she writes.

Kate Wiles in the New Statesman claims that cunt is actually more feminist than vagina from an etymological point of view, because vagina comes from the Latin word for "sword sheath" and is therefore dependent by definition on the penis. Laurie Penny, also writing for the New Statesman, argues that men have dozens of words that hint at their sexual power, but cunt is the only truly empowering word for the female genitalia.

In The Vagina Monologues, writer Eve Ensler pens a sketch about reclaiming a pejorative word that's been used to declaim the vagina: "Cunt. I've reclaimed it. Cunt. I really like it."

Penny also argues that women should reclaim cunt "as a word of sexual potency and common discourse rather than a dirty, forbidden word."

Now that the Oxford English Dictionary is listing several forms of the word in its official lexicon, perhaps cunt will shed its taboo and become a word of pride and power.

However it really does seem only fair that if Shakespeare, Geoffrey Chaucer, James Joyce and D.H. Lawrence — a bunch of old white men — could use it rather joyfully, why shouldn't we?