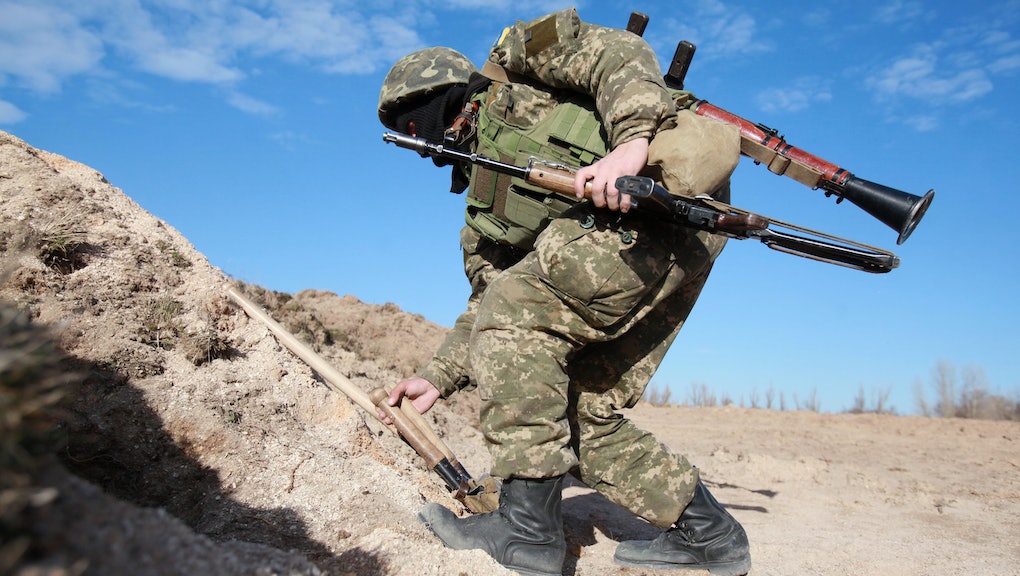 The conflict between the Ukraine and Russia over the Crimean peninsula may have just escalated into a shooting war.

According to Ukraine's Ministry of Defense, a serviceman was shot to death in a battle with local self-defense forces "possibly backed with Russian troops," who stormed a Ukrainian-held navigational facility. If the reports are accurate, the death of the soldier would mark the first Ukrainian fatality since thousands of Russian forces stormed Crimea at the end of February.

"The conflict is moving from a political one to a military one because of Russian soldiers," Ukrainian Prime Minister Arseny Yatseniuk claimed on Tuesday. "Today, Russian soldiers began shooting at Ukrainian servicemen and this is a war crime without any expiry under a statute of limitations."

Yatseniuk called upon his British, French, and Russian counterparts — signatories to a 1994 agreement respecting the Ukraine's territorial boundaries — to meet immediately.

Here are three things you need to know about the rapidly escalating situation:

1. In a Russian-promoted "referendum," Crimea recently voted to join Russia.

President Vladimir Putin claims that over the weekend, a referendum by Crimean citizens on whether or not they wanted to join Russia received 97% support — a proposition that is frankly ludicrous. According to U.S. officials, there were "vast anomalies" in the voting process and "strong evidence" many ballots arrived pre-marked in favor of merging into Russia.

“We reject the ‘referendum’ that took place today in the Crimean region of Ukraine,” the White House said in a statement. “This referendum is contrary to Ukraine’s constitution, and the international community will not recognize the results of a poll administered under threats of violence and intimidation from a Russian military intervention that violates international law.”

Tough sanctions on key Russian individuals were issued Monday as a response to the referendum. But the Kremlin is insisting the vote legitimizes its actions in the Ukraine.

The penalties issued by the EU and the U.S. are "a reflection of a pathological unwillingness to acknowledge reality and a desire to impose on everyone one-sided and unbalanced approaches that absolutely ignore reality," Deputy Foreign Minister Sergei Ryabkov responded.

"I think the decree of the president of the United States was written by some joker," said Deputy Prime Minister Dmitry Rogozin, who was hit by the sanctions.

2. Russia's neighbors are terrified that they will be next to be annexed.

Just like in the Ukraine, large numbers of ethnic Russians live in former Soviet republics bordering the Russian Federation. This has many of them worried that they'll be the next country annexed under the pretext of protecting Russians across Eastern Europe, leading to an immediate and abrupt increase in military spending after decades of lowered readiness.

"After the events in Ukraine, the Russian aggression, the need to increase spending will be better understood by Lithuanian people, and there will be more support for it," the Lithuanian defense minister said of a planned increase to their $390 million military budget.

Moldovan and Georgian officials warn that Russian adventurism could cross into their borders; Georgian Prime Minister Irakli Garibashvili is requesting offers of EU membership to protect against their neighbor to the east. And even the Baltic states of Estonia, Latvia, and Lithuania — members of NATO — are getting jittery.

The Pentagon is ramping up the number of NATO jets on air patrols in the Baltics, and has furthermore scrambled jets nearly 40 times in response to Russian patrols in 2013 — up from just one such incident in 2004.

3. Despite Russian aggression, neither the West nor Russia want anything to do with a greater military conflict.

Ukraine apparently expects U.S. military help if Russian forces encroach further onto sovereign Ukrainian territory. Protest leader Vitali Klitschko says that "if Russia continues aggression," the Ukraine will be calling in "support from all democratic forces, from all democratic countries," including presumably NATO. Meanwhile, a prominent Russian TV anchorman reminded viewers that the Russian Federation is "the only country in the world capable of turning the U.S.A. into radioactive dust."

But beyond all the grandstanding, it seems Russia isn't eager to rush into a wider conflict.

And while the U.S. is issuing tough sanctions, using force to support the Ukrainian government seems out of the question. So rest easy, we won't be seeing nuclear annihilation anytime soon.