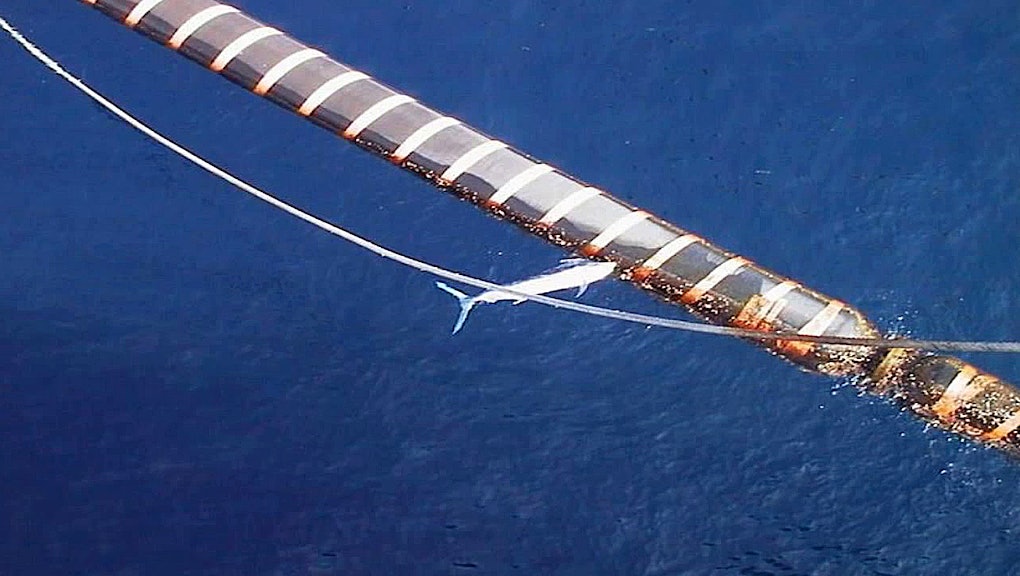 While the human species continues to bicker about what to do about climate change, animals appear to realize the urgency of the situation, and are taking direct action. In an incredible story of nature fighting back against ecological destruction, a 14-foot blue marlin attacked and damaged an offshore oil rig in Angola last month. This attack caused BP to halt exports of crude oil, costing the corporation $100 million so far.

According to a report by the International Energy Agency, the marlin punctured a critical hose that connects the Plutonio oil rig's production, storage and offloading facilities. BP declared a "force majeure" for five days to avoid penalties from not making their contracted number of monthly oil output. The rig typically produces 180,000 barrels a day, so some 900,000 barrels of oil were lost.

Fortunately there were no reports that an oil spill was caused by the incident. Sadly, there are few details available about the fate of the plucky marlin, though one suspects the worst. It left behind a sizable imprint from its adventure, its bill was lodged in the 24-inch diameter rubber piping.

The background: The blue marlin is one of the fastest and largest fish in the world, and can grow up to 14 feet in length and weigh close to 2,000 pounds. The stunning creatures are native to the waters of the warmer Atlantic ocean region, and are blue-water fish, meaning they spend most of their lives far out at sea. Fisherman have long known that marlins are fierce fighters, famously described in Ernest Hemingway's classic The Old Man and the Sea.

Incredibly it's not the first time that nature has attacked the fossil fuel industry. Like many human activities that drastically affect the environment around them, offshore oil platforms act like metallic coral reefs and are known to attract a host of marine species. In the past decade, groups of swordfish have attacked a host of Angolan oil pipelines including Plutonio, causing multi-day disruptions. Large predators such as sharks have also been known to be drawn to the oil rigs, attracted by the schools of fish that congregate there.

The takeaway: This incident is a small, but fitting retribution for a company that has caused one of the worst environmental disaster in history, the Deep Horizon oil spill in 2010. In this catastrophe, 200 million gallons of BP's crude oil was pumped into the Gulf of Mexico during a total of 87 days, affecting over 6,000 miles of coastline. Some 8,000 animals were reported dead just six months after the spill, including many already endangered species. Even four years later, the effects continue to be devastating, with research showing that left over toxins are responsible for causing cardiac arrest in many species of fish, including marlins.

In addition, the contribution of the fossil fuel industries to climate change could prove extremely damaging to many marine species that are already under threat from overfishing and habitat loss.