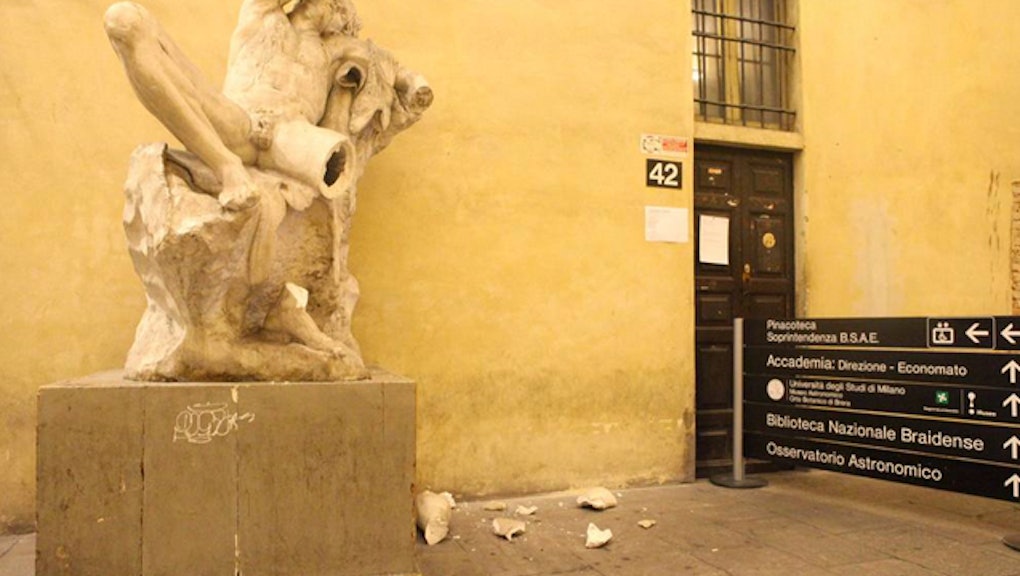 A Student Destroyed A 200-Year-Old Work of Art, With One Selfie

It endured two World Wars and outlasted generations. But this 19th-century copy of the priceless Greco-Roman statue The Drunken Satyr couldn't survive a selfie.

Security guards at the Academy of Fine Arts of Brera in Milan, Italy, were horrified to find this damage done to the statue on Tuesday morning. They later surmised based on witness testimony that the perpetrator was an unknown young student who posed on its lap for a photograph, after which a very certain "oh shit!" moment ensued. Or, more likely, santa merda!

CCTV footage malfunctioned, so security was unable to identify who was in the vicinity of the statue when the amputation occurred. But no sign of the selfie, if was ever even taken, has shown up on the internet in what's undoubtedly the only smart move made by the perpetrator lately.

The original Barberini Faun statue was made in the second or third century B.C. by an unknown sculptor of the Pergamene school, and is currently stored in the Glyptothek in Munich, Germany, which hopefully has better security.

While it would be easy to blame the destruction of this priceless work of art on generational narcissism (and to be clear, this is the work of at least one indefatigable narcissist), defacing irreplaceable art isn't solely the province of Millennials. Many of you will remember the horrible fate which awaited 1930s-era fresco Ecce Homo by artist Elías García Martínez when an 80-year-old local woman in Borja, Zaragoza tried to "restore" it:

Accidentally damaging art is nothing new, but this is one of the only cases where the damage seems to have been inflicted by such obvious negligence. This is basically artistic manslaughter via selfie.