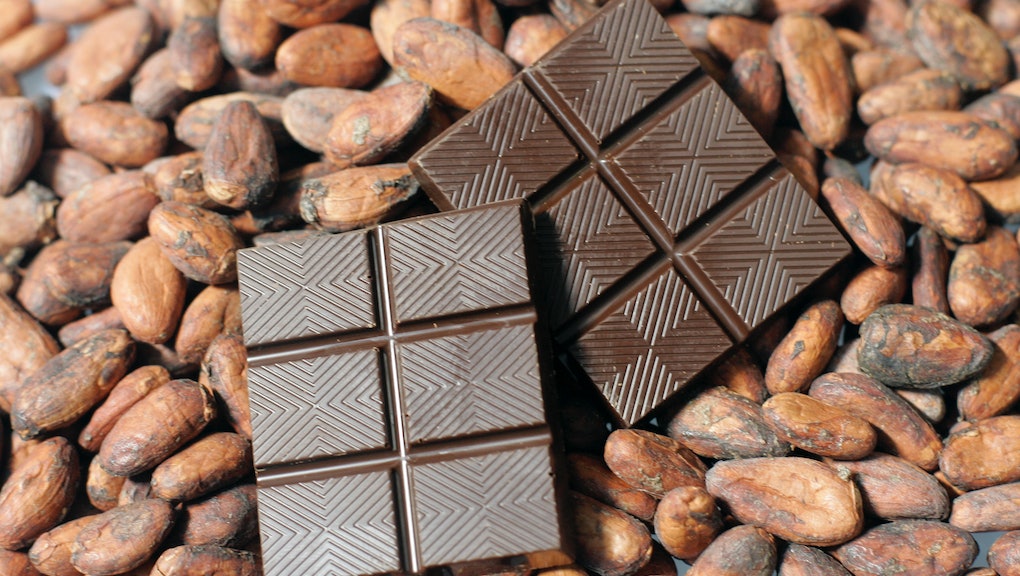 Scientists Have Discovered a Great Reason to Eat Chocolate Every Day

Rejoice, chocolate lovers! We've long heard about the health benefits of dark chocolate, but there's finally scientific proof to back it up — and you can thank your own gut's bacteria for that.

According to new research at Louisiana State University, the bacteria in the stomach breaks down and ferments dark chocolate, turning it into anti-inflammatory compounds that are good for your heart. "When these compounds are absorbed by the body, they lessen the inflammation of cardiovascular tissue, reducing the long-term risk of stroke," said John Finley, the researcher who led the study.

Dark chocolate has been previously linked to lower blood pressure and body weight, but until now its exact cardiovascular effects haven't really been explained. While chocolate has been known to contain fiber and polyphenols — powerful antioxidants that help to prevent heart disease and cancer — these molecules were considered too big to be digested by the human body.

Cue the bacteria. Although these components are not initially digested well, the microbes in the colon break them down. The healthy bacteria turn polyphenols into smaller anti-inflammatory compounds the body can absorb, and the fiber is simplified into short fatty acid chains that help to curb appetite.

So does that mean chomping down on Hershey bars will stop you from having heart attacks? Not at all. The research focused on cocoa powder, which does not contain sugar or milk. If the chocolate is adulterated by sweeteners and other additives, the healthful effects will go down.

But there are ways to boost dark chocolate's benefits as well. Finley suggests pairing chocolate with prebiotics, which are essentially sustenance for your gut bacteria. These carbohydrates can be found in everything from raw garlic to cooked whole wheat flour, and they help to maintain a healthy bacterial population in your stomach. "When you ingest prebiotics, the beneficial gut microbial population increases and outcompetes any undesirable microbes in the gut, like those that cause stomach problems," Finley said. He added it's also a good idea to combine dark chocolate with solid fruits, such as pomegranates and acai berries.