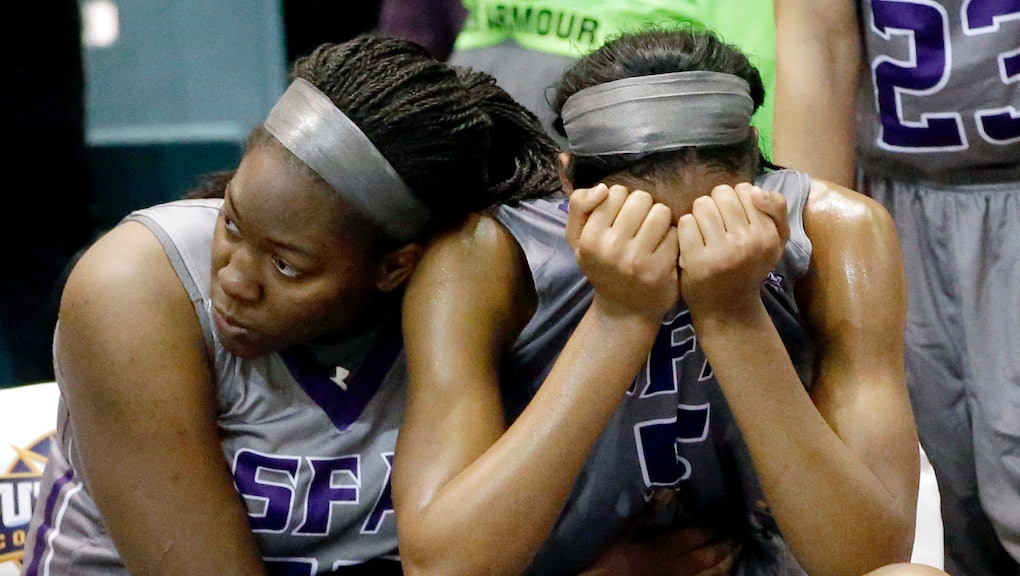 The goal of many college athletes is a lucrative contract with a marquee professional sports team.

But according to Al Jazeera, less than 2% of these players go pro, leaving 98% to undergo some serious life re-evaluation. Helix reports that adjusting to life after sports can take a serious psychological toll:

"Unfortunately, we don't really talk about it very much or prepare athletes for it," says sports psychologist Caroline Silby.

What does this transition look like? As you'd expect, college athletes have spent years of their child- and young adulthood honing their athletic skills. Hours per day spent on courts, tracks, fields and in weight rooms culminate with the opportunity to play at a high collegiate level. For years more they dedicate increasing chunks of their time to preparation, conditioning and competition. In many cases, life revolves around their sport — it defines them and gives them purpose.

Then suddenly, it's all gone. "I miss it so much," says Jenny Wilson, a former swimmer at Northwestern University. "There is a huge void in my life."

Wilson set school records in the 100- and 200-meter breaststroke and took part in the 2012 Olympic trials. For most of her young life, including college, she was out of bed for practice before 5:30 a.m. Now she works at the Hartford Courant in Connecticut as a reporter. It was a jarring shift, to say the least.

"The more you devote yourself to something, like swimming, and the more sacrifices you make for it, the harder it is to let it go," says Taylor Reynolds, another former Northwestern swimmer.

Southern Illinois University Carbondale grad student Erica Smith wrote an article on the subject: "One of the reasons why it is so hard for athletes to transition out of their sport at all levels is because they have probably had a lot of success in that sport," she says. "Maybe they have had more success in their sport than in any other area of their life. Therefore, they are defined by their sport success."

But thousands of "student-athletes" undergo this transition. Many are completely prepared, even relieved by the prospect of change. Others do not adjust so seamlessly: Sports psychologists say the transition can result in serious depression or other mental health issues.

"Even when athletes are happy about moving on and starting the next phase of their life and excited about that possibility they’re also simultaneously experiencing the sense of loss," Silby adds.

Many have likened the adjustment period to the loss "of a loved one or other tragic event," as both feature similar stages of reaching acceptance. Loss of "sports self-esteem" is another factor leading to mental anguish:

What's being done about this? Unfortunately, many athletic programs do not offer sports-specific mental health services to college athletes. While general on-campus counseling is still available, athletic departments should invest at least a fraction of the energy they spend winning games on their athletes' mental health.

Meanwhile, the key to acceptance of life after sports is investing in a new passion, according to Helix: "You've got to be able to cope with it and the only way to do that is to realize that life goes on," said Anshel.

It's a harsh fact, but for 98% of college athletes, life goes on.