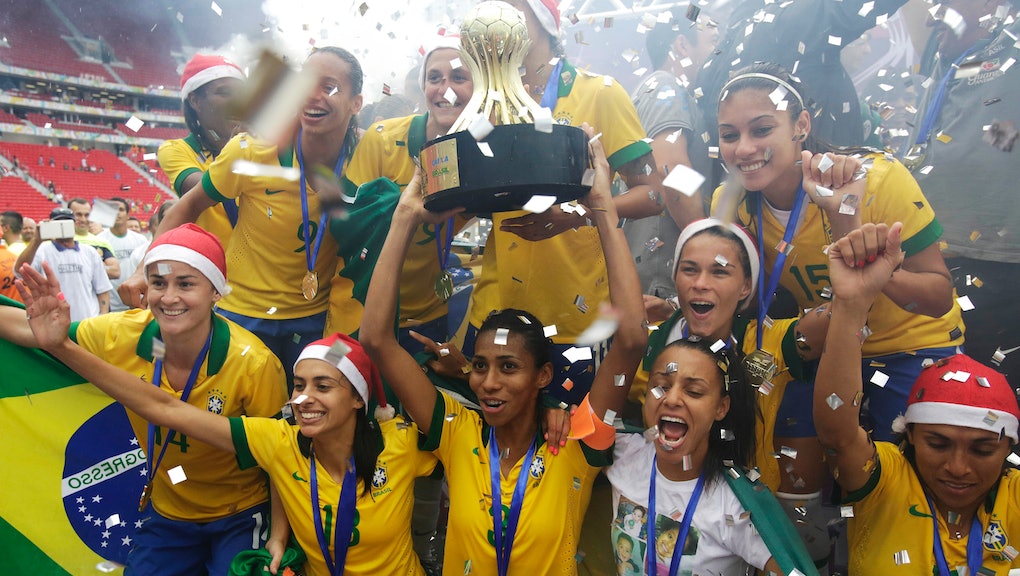 The Dark Side of Brazil's Love for Women's Soccer

This summer's World Cup will bring together two things for which Brazil is internationally renowned: soccer and beautiful women.

While Brazil's reputation for sexy ladies and futebol are mixed together in the advertising leading up to the games, it's another story on the field. The struggles of women attempting to break into the male-dominated world of soccer reveals the darker side of the beautiful game.

For a country renowned for its passion and prowess in the sport, acceptance of women's participation in soccer has been frustratingly slow. It wasn't even legal for women to play in Brazil until the 1980s, and the view of soccer as a man's game has stubbornly persisted. Young girls are often discouraged to play by their parents, ostensibly to keep them from getting physically hurt, though more likely out of fear they will be ostracized.

At the professional level, Brazilian clubs and sponsors have been reluctant to spend resources on women's teams. Indeed, one of the country's most prominent clubs, Santos, had a women's squad but disbanded the team in 2012 after 15 years to free up funds for the men's salaries.

It' not just players who face barriers — female journalists, referees and even fans must overcome resistance to carve out a space for themselves in the realm of Brazilian soccer.

Despite these challenges, women's soccer has never been more prominent in Brazil. This is due in large measure to the success of Brazil's national team, which earned silver medals at the Athens and Beijing Olympics. Brazil's own Marta Vieira da Silva, known simply as "Marta," is now a household name after being crowned FIFA player of the year five consecutive times between 2006 and 2010.

These accomplishments have helped soften public opposition to girls entering the sport. Though top players like Marta will still find more professional opportunities abroad, there are signs that Brazil's clubs may finally be seeing the light. Last year was the first time since 2001 that Brazil held a women's national championship, which was funded by one of the country's largest banks.

But this newfound visibility has been a double-edged sword for women's soccer. Specifically, becoming more mainstream pressures players to be more feminine.

Caitlin Fisher is the founder of the Brazil-based Guerreiras Project, which educates and empowers women through athletics. An American soccer player who briefly played for Santos a decade ago before continuing her career elsewhere, she was surprised by her teammates' transformation when she moved back to Brazil a few years later. Many had grown out their hair, for instance, which they said helped project a more socially acceptable image for their sport. Nowadays, "You enter the locker room and everyone is putting on eyeliner or powdering their faces to step onto the pitch," said Aline Pellegrino, former captain of the Brazilian women's national team.

FIFA touts the "exponential growth" of women players and leagues worldwide as a positive development. Nevertheless, FIFA President Sepp Blatter once said women's soccer could increase in popularity if its players wore shorter and tighter shorts like they do in volleyball. His comment drew widespread condemnation, but the insinuation that the sport would need to be feminine to succeed seems to have been borne out.

Brazil is hardly unique in this regard, but as the world leader in buttocks augmentation and vaginal "rejuvenation" surgeries, it could certainly benefit from greater consciousness around body image on and off the field.

In this light, the rise of women's soccer is especially important since it celebrates female bodies that are active and strong. For soccer to become a truly national pastime in Brazil, it is critical to make sure that women athletes do not need to conform to the same misogynistic notions of femininity that discouraged them from kicking around a ball in the first place.