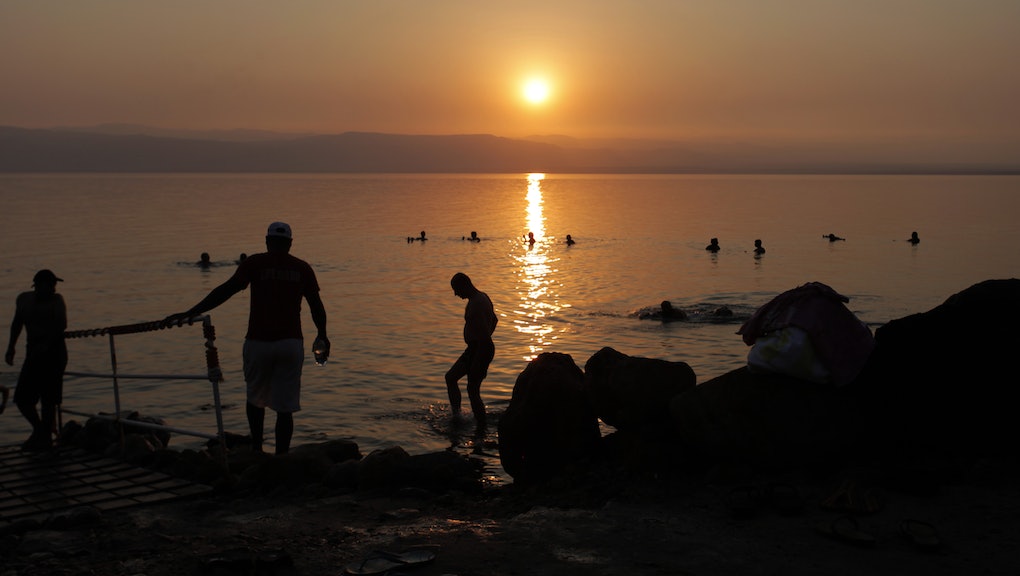 Situated at the lowest point on Earth, 1,401 feet below sea level, the Dead Sea is a unique natural treasure that is as rich in minerals as it is in history. It is mentioned in the Bible and has been a hub for health tourism for thousands of years, with visitors coming from all over the world to take advantage of its therapeutic qualities. But it might not be around for much longer, at least not in its tourist-friendly version.

This salt lake bordering Israel, Jordan and Palestine has lost more than one-third of its surface area since the 1950s. Its shoreline has regressed by more than 25 meters in the past five decades and is now receding at a rate of approximately one meter per year. Experts predict that if water loss continues at the current rate, the Dead Sea would shrink to 77 square miles by 2050. It is approximately 230 square miles today.

The decline of the Dead Sea's water level jeopardizes the future of tourism in the region. When the water level falls, subterranean salt layers come in contact with fresh ground water. The fresh water dissolves the salt layer, creating an underground void that causes the surface to collapse. Scientists have no way to determine when the next hole may open. Thousands of sinkholes have already been created, making many of the Dead Sea's beaches too dangerous to access.

Why is the Dead Sea losing its water?

The first and main reason is population growth. The Dead Sea is located in a desert and its water has always evaporated at a fast rate. In previous centuries the water level was maintained thanks to a constant supply flowing in from the Jordan River. But population growth in the region has led to increased demand for fresh water. In the past half-century Israel, Jordan and Syria, which control the flow of the Jordan River and its tributaries, built dams and reservoirs, diverting more than 96% of the river's water for drinking and agricultural use.

The second reason is also a consequence of human development that is not environmentally sustainable. Approximately 30% of the Dead Sea's water loss is a result of the minerals extraction industry. The Arab Potash Company on the Jordanian side and Dead Sea Works on the Israeli side to pump out water from the Dead Sea to huge evaporation pools. From these pools the minerals are harvested and then sold worldwide as a broad range of chemical products for the agriculture, cosmetics and food industries. The salt you just sprinkled on your fries? There's a good chance it originated in the Dead Sea.

Both in Israel and in Jordan, the mineral industry is a huge employer and taxpayer. It's in neither of these countries' economic interest to force the industries to stop extracting minerals, even though that would slow the Dead Sea's water level decline by about one-third.

On Dec. 9, 2013, a first significant step was taken to address the Dead Sea's water loss. Did the countries agree to cut back on water-consuming agriculture that might not be suited for such a dry region? No. Did the governments decide to force the mineral industry corporations to find an alternative, sustainable way to make their profits? No.

What did happen is that Jordan, Israel and the Palestinian Authority signed a long-term water exchange deal, which includes an experimental project that aims to mitigate the Dead Sea's water loss. A seawater desalination plant will be built in Aqaba, a Jordanian city located on the Red Sea, 180 kilometers south of the Dead Sea.

In this plant, water from the Red Sea will be desalinated for drinking and agricultural use in Jordan and Israel's southern regions. The brine that's created during the desalination process will be transferred in a pipe to the Dead Sea. The idea is that this brine will compensate for the Dead Sea's water loss and stop, or at least minimize, its shrinking surface area.

This idea was examined by a group of international scientists in extensive research funded by the World Bank. They concluded that channeling 700 million cubic meters of desalinated brine to the Dead Sea per year — the amount needed to halt the falling water level — would cause significant environmental damage, potentially ruining the lake's therapeutic benefits.

Nevertheless, faced with no better alternative and frightened of the possibility of seeing their most precious natural treasure and tourist attraction disappear, Israel, Jordan and the Palestinian Authority are going ahead with the experiment. The plan is to transfer only 100 million cubic meters of brine per year for the first few years and then gradually increase the amount. Scientists will monitor the Dead Sea's reaction to the brine and search for ways to mitigate negative environmental effects. The projected starting date is 2019.

Green NGOs like Friends of the Earth Middle East (FOEME) have criticized the plan, calling it environmentally unsustainable. FOEME has lobbied for an alternative solution based on the idea of rehabilitating the Jordan River. But both Israeli and Jordanian officials have said that in a region experiencing recurring droughts and water shortages, there's no realistic scenario in which fresh water would flow into the Dead Sea.

FOEME have also called on the mineral industries to increase their investments in developing technology to extract minerals without evaporating the water. Such technology is said to be in the works, but is still far from being operational.

Additional pressure from the Syria conflict

The war in neighboring Syria has caused more than 600,000 Syrians to flee to Jordan, putting an even larger strain on Jordan's water resources and decreasing the already slim chance of rehabilitating the Jordan River. Wait, there's more. Scientists examining the effects of climate change on the region predict a decrease in average annual precipitation and an increase in drought years.

If the status quo continues, there will not be a happy Hollywood ending to this Middle Eastern story. Reversing this ongoing, man-made ecological disaster is up to the main players in the region. The Dead Sea industries must invest more of their profits in the effort to invent a technology for sustainable mineral extraction, and the region's governments must establish a sustainable cross-border water economy that would recreate a natural flow of water from the Jordan River to the Dead Sea.