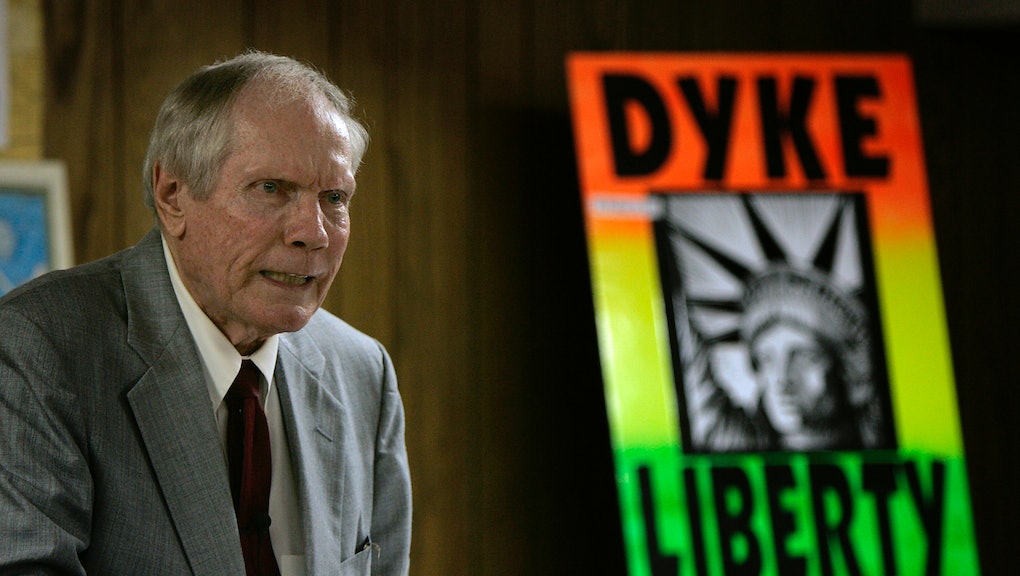 Fred Phelps Is Dead — Why I'm Not Celebrating

According to multiple local news sources, Fred Waldron Phelps Sr., founder of the Westboro Baptist Church, has died. But I won't be celebrating his death.

Certainly, no one would fault me for a happy smile or two. As founder of the WBC, Phelps presided over an organization that actively and aggressively made the case that I and all my queer brothers and sisters were abominations, unworthy of love and definitley going to hell.

But here's the thing. He's not worth it. At his last moments, the 84-year-old activist was a frail old man being cared for in a Shawnee County hospice facility, Westboro Baptist Church spokesman Steve Drain said Sunday. Daughter Shirley Phelps-Roper and son Tim Phelps separately confirmed their father's death. He didn't have any power over me. Indeed, he reportedly didn't had any power over anyone.

A virulently bigoted "church," the Kansas group became known around the world in the past several years for its efforts protesting military funerals, political gatherings and victims of high-profile crimes with polarizing, offensive signs and slogans such as "Thank God for 9/11" and "God Hates Fags."

As its creator and first member, Phelps started Westboro in the 1950s, decades before its rise to derisive prominence. While the church is generally tight-lipped about internal policies, it has recently come to light that Phelps may have been excommunicated from the very church he founded following a power stuggle with the outspoken Shirley Phelps-Roper. After losing control over the church elders, Phelps may have advocated for "kinder treatment of fellow church members," leading to his banishment.

As news of Phelps' ill health spread this week, there was talk about what his imminent demise might mean. Should the LGBT community picket his funeral, some asked?

Others dealt with the event through humor, exemplified by the Facebook page, "Fred Phelps Death Watch," or with pleas for forgiveness. "We're preaching love for ourselves and for our right to love," Azariah Southworth, a blogger and student at Purdue University said. "Let's go all the way with the message and show love to the most unlovable person."

Ex-communicated former member of the Westboro Baptist Church Lauren Drain also called for compassion in a post on her Facebook page:

I wish for peace. I wish for change. I wish for families to be reunited in love. Please help spread compassion and understanding despite the utter confusion in this situation. Consider this, there are members still there, like my younger siblings, who can and will learn from experiencing compassion from others, not polarizing hate. Prove the WBC wrong. We all seek peace not vengeance.

In this case, the easier option is always celebration — there is something very primal, and macabre, in the desire to revel in the death of an old enemy. Phelps started a movement that, perhaps more than any other, symbolized the worst strain of homegrown homophobia. But that doesn't mean we should be should be partying in the streets. As someone who witnessed the often bizarre and almost bloodthirsty way Americans celebrated the death of Osama bin Laden, I think the best way to recognize this man's death is through progressive action. Let's come together and rededicate and re-energize ourselves for the fight to eradicate homophobia and inequality of all kinds.

Indeed, over the past several years, it seemed increasingly as if the efforts of the Westboro protesters were being overshadowed by their counterprotesters. In instance after instance, WBC protests became rallying points for the community, sparking massive shows of solidarity in love in the face of vitriol and disgust.

Yes, Fred Phelps is dead, but the movement to make sure the world is a more humane place for all is very much alive.