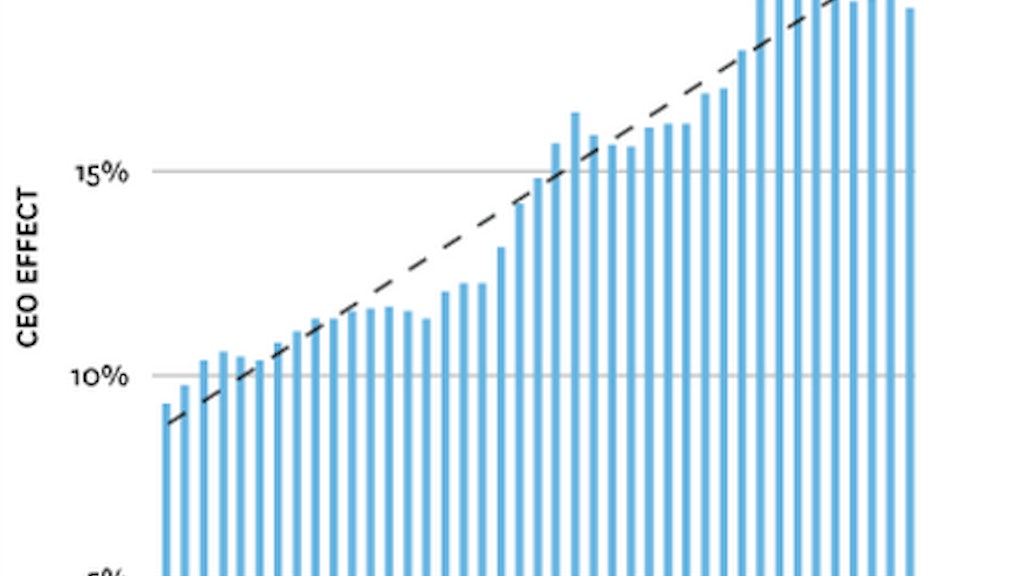 As the face of a company, chief executives are important people. When a company's CEO changes, the company also changes — at least according to public perception. Case in point is the market skepticism that Apple experienced when it changed CEOs from the late Steve Jobs to Tim Cook.

But can we predict a company's success based on one big personality with a killer business sense?

As it turns out, maybe we can. The Harvard Business Review reports that researchers at the University of Georgia and Penn State will soon release a paper suggesting that CEOs carry more weight in their companies than ever before. The "CEO effect" predicts a strong correlation between a successful CEO and increased sales, higher returns on assets and the relative value of a company.

Everybody likes a champion who can run the show and save the day single-handedly, but in the business world, the CEO wasn't always the star attraction. Between 1950 and 1969, 28.7% of a company's performance could be attributed to the particular industry it served. The economy was growing and CEOs could roll alongside good fortune easily. Between 1990 and 2009, amidst a few recessions, bursting bubbles and the collapse of the global financial market, a company's industry only accounted for 3.7% of how it performed.

What changed? Part of it was a cultural shift in consumer responsibility, meaning people realized it is on them to keep companies honest. A CEO's job then became centered on leadership and maximizing shareholder value. Technology and global interconnectedness sped up the pace of growth. Not only did companies have more ways to make money, but consumers gained more insight into company and CEO behavior. Ethical — or at least informed — spending is way easier when you can look into a corporation's activities online, and people want to know their money is going to people they can trust. Or a CEO they can admire.

One complicating factor, of course, is that CEOs may not actually be more important at all: We might think they matter more than they really do. Even a mediocre CEO can succeed when his or her niche in the industry is profitable. But the CEO Effect seems measurable, whether it's real or not.