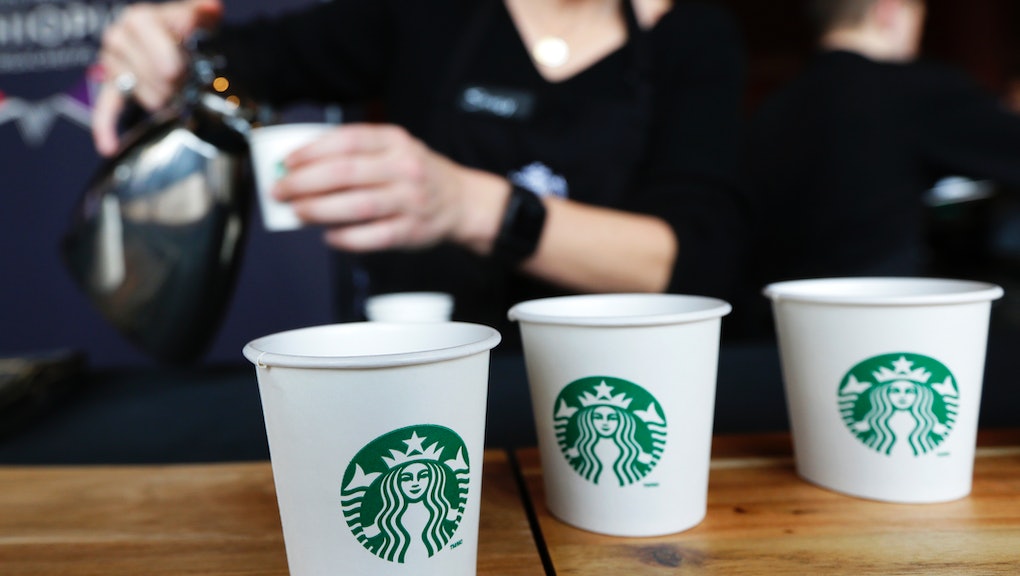 In news that will chill the heart of any barista, Starbucks is set to begin selling alcoholic beverages at thousands of its stores in an attempt to attract customers in bustling urban areas near restaurants and theaters. Wine and beer are being added to the after-4 p.m. menu, as are bacon-wrapped dates, truffle mac n' cheese, chocolate fondue and other items typically found at wine or tapas bars.

What does this mean, other than the expansion of Starbucks' bourgeoisie coffee market to late-night drunks and boozy date nights? While the rollout will take several years, the menu switch generated a "meaningful increase" in sales for 25 locations throughout Seattle, Chicago, Southern California and Atlanta, according to Starbucks COO Troy Alstead. And rising milk and coffee prices have seen the chain looking for other sources to increase its revenue, with wine-bar-style offerings a clear and open direction for Starbucks' cosmopolitan image ... and charge exorbitant prices for cheap booze.

And as Slate notes, it's also an effort to make sure people visit Starbucks throughout the entire day. Some 70% of the chain's sales occurred before 2 p.m. in 2010. That's a lot of low-activity real estate sitting around for half the day, especially considering how much all that urban real estate must cost on an annual basis. Starbucks wants to make itself a cool evening hangout, or at least a more attractive jumping point between bars.

Business Insider tracked down some snapshots of the new menu items, and they do look somewhat tasty as far as pre-made food goes:

As for how it'll affect Starbucks' atmosphere, PolicyMic spoke to one New York City Starbucks barista — who chose to remain anonymous — to see whether they were worried it would overrun their shift with drunkards:

"Well, we already deal with a lot of drunk people at our store. It might improve tips which would be nice, but I suppose if people are stingy when drunkenly getting a frappuccino late at night maybe it won't change anything," they said. "I kinda hate it, but nothing can be worse than frappuccinos already are."

However, despite potential drawbacks, there are some possible positives that this barista envisioned coming out of this new business model, even if they're only a silver lining.

"It might improve prospects to escape Starbucks, since you could claim work experience with alcohol ... I also don't think it makes much sense as a business decision. But, hey, I'm not paid to worry about that."