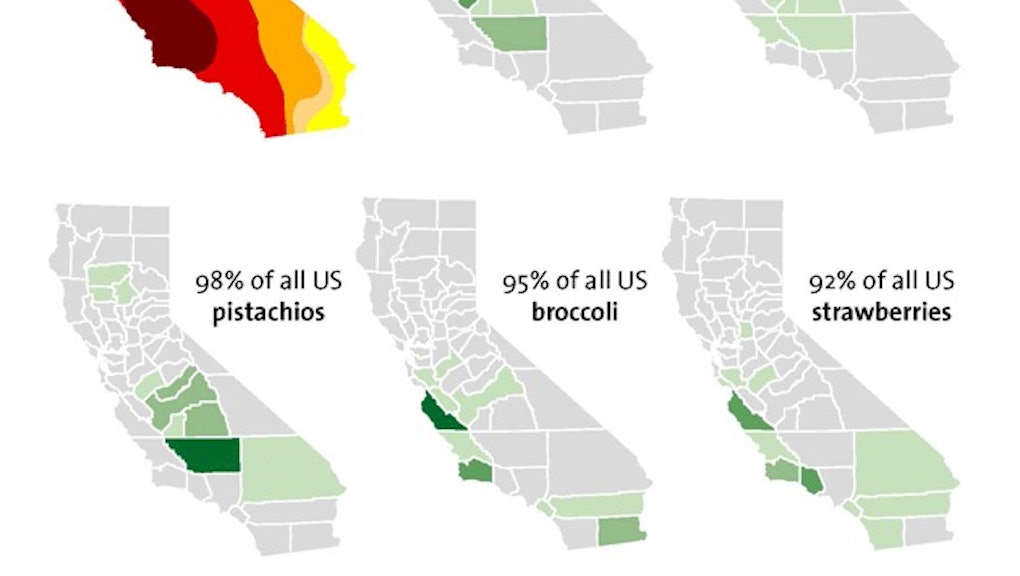 Despite the beginning of the rainy season, California's nightmarish drought is far from over. Reservoirs across the state are going dry, threatening both the water supply of the state's cities and the massive agricultural production only made possible by extensive irrigation.

This interactive map from Bay Area developer Victor Powell (originally published on KQED) shows the impact of California's drought on the region's water supply. One of the state's warmest winters on record has aggravated California's ongoing three-year drought, which is expected to persist or even intensify in coming years. The reservoirs typically fill during the wet winter months and most slowly drain over the summer and fall. But 2013 was the West Coast's driest year on record, and the third hottest. With an average temperature of 48 Fahrenheit (9 Celsius) for December, January and February, 2013 was up from the last recorded hottest winter (47.2 F) in 1980-81, and more than 4 degrees hotter than the last century's average. And storms over the past month have barely made a dent in what looks to be a growing disaster for California farmers.

As seen in the interactive above, many reservoirs are already at very low water levels, and most in Central California in particular seem unlikely to refill in time for the summer. That's especially bad news seeing as that's where the majority of the state's agricultural production comes from, as this graphic from Mother Jones demonstrates:

100% of California is now under at least moderate drought, according to the latest U.S. National Drought Monitor. Snowpack in many places is under half of its normal amount.

A NOAA statement warned that "If the drought persists as predicted in the West and Southwest, it will likely result in an active wildfire season, continued stress on crops and livestock due to low water levels, and an expansion of water conservation measures."

"Winter is when states like California amass their main water budget, when snowpack is building," said NOAA spokesman and marine biologist Brady Phillips. "If you're starting from a deficit and going into the dry season, it's setting you up for a drier summer."

Whether or not the drought is a direct consequence of climate change is now an irrelevant question, seeing as scientific research overwhelmingly agree that it's making the drought worse. In a statement from the Pacific Institute, climate scientists alleged "We are now unambiguously altering the climate, threatening water supplies for human and natural systems. This is but one example of how even today we are paying the cost of unavoidable climate changes."