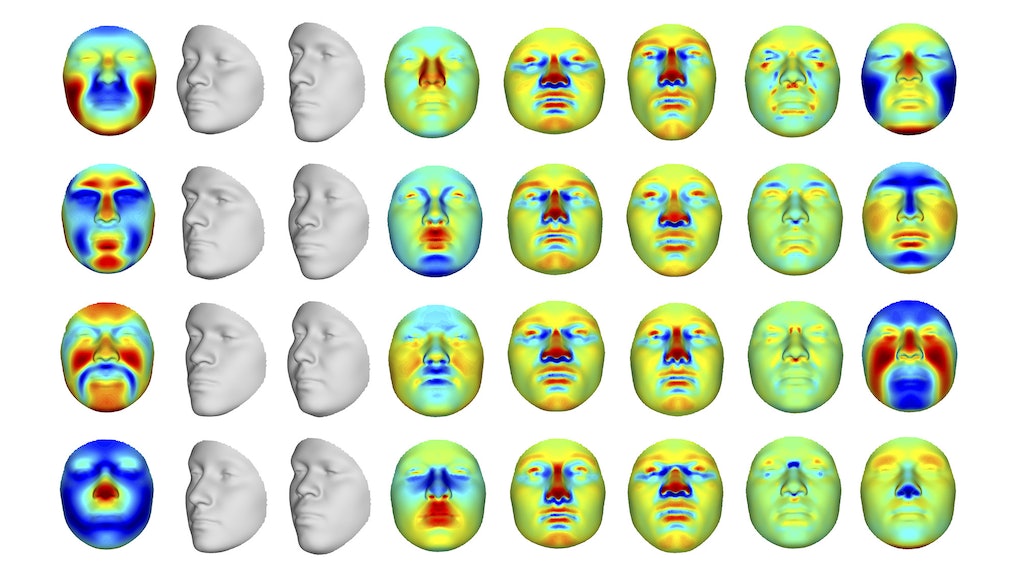 Scientists Have Learned How to Reconstruct Faces From DNA Samples

It's a common scene on the hit TV show CSI. Police arrive at the crime location. After surveying the landscape for physical clues, the forensics team is called in to swab for fingerprints and retrieve a DNA sample. If the they're lucky, these pieces of evidence will match someone on file. If not, the cops will have to rely on the traditional work of questioning witnesses, and creating sketches from their testimonies which may lead them to the perpetrator. Not the most accurate method in the world, but it can be effective. In the future, this could change.

Professor Mark Shriver and his biological anthropology team at Penn State have developed a method that can reconstruct the facial features of a person into a 3-D model using DNA evidence.

"We use DNA to match to an individual or identify an individual, but you can get so much more from DNA," said Professor Shriver. In a paper published in PLoS Genetics, the researchers claim: “We show that facial variation with regard to sex, ancestry, and genes can be systematically studied with our methods, allowing us to lay the foundation for predictive modeling of faces.”

How does it work? First, the Penn State team took high resolution images of faces belonging to almost 600 individuals of mixed European and West African ancestry. Studying people with mixed ancestry was important because the differences were used to discern which genetic variants affected facial structure.

They digitized the images to create 3-D models, with each face divided into a grid consisting of 7,000 points. The distances between points were used to distinguish differences in facial features. Certain features such as nose shape and cheekbones can vary widely.

Next, the researchers examined the genomes of the volunteers, and looked for areas in the DNA that differ by a single base. Because there are over 60 million of these genetic markers in humans, the team limited their search to only genes that are thought to play an important role in facial development. These narrowed the analysis down to 76 genes that are known to cause facial abnormalities when mutated. They speculated that less drastic variations of these sames genes could lead to more subtle differences in facial shapes.

In addition to differences in individual genes, other factors also play significant roles in facial shape. Therefore, the researchers developed a statistical model that could distinguish the contributions that genes, sex, and ancestry each had on facial features.

After statistical modelling, the researchers were able to pinpoint 24 markers spread across 20 genes that could predict facial shape. For example, one of these markers resides in a gene (SLC35D1) that when mutated causes a rare syndrome that leaves an individual with large cysts around the eyelids. This correlates well with the research team's model, as demonstrated by predictive heat maps:

Using this data, the team developed a 3-D modelling program that can examine an individuals DNA for these 24 genetic variants and use them to generate a predictive 3-D facial model. New Scientist asked Shriver's team to use the method to create a facial model using the DNA of one their reporters. Judge for yourselves how accurate the result is:

Unsurprisingly, predicting facial features is far more difficult than say, skin color.  “One thing we’re certain of: there's no single gene that suddenly makes your nose big or small,” says Kun Tang, a biologist at the Shanghai Institutes for Biological Sciences in China. The next step will be to locate more genetic markers that might influence facial structure. Future models will probably also need to incorporate other important factors such as climate exposure, age and weight.

Still, the current results are encouraging, and the researchers believe that the technique will be ready for practical use in the next 10 years. One obvious application is in forensic investigation of crime scenes and unsurprisingly, the U.S. Department of Justice is supporting the research with sizable grants. One of the main hurdles that researchers will have to overcome is the sensitivity of the tests. Analyzing potentially hundreds of facial genetic markers currently requires large, high-quality samples of DNA, but in the field, usually only trace amounts of DNA are found. Also, it's important to note that no matter how accurate the technique becomes, it wouldn't be suitable for use as evidence in a criminal trial. The idea would be that the method could help narrow the initial search.

Another exciting use of the technology would be to help uncover facial features of extinct human relatives such as the Neanderthals. This would be particularly useful for ancestors for which there is limited fossil evidence, but even for those where that exists, this technique could help glean new details about the features of soft tissues that are currently subject to guesswork.

So whether it's the mystery of "whodunnit" or a mystery of the past, DNA may just be the right key to solving many of our problems.