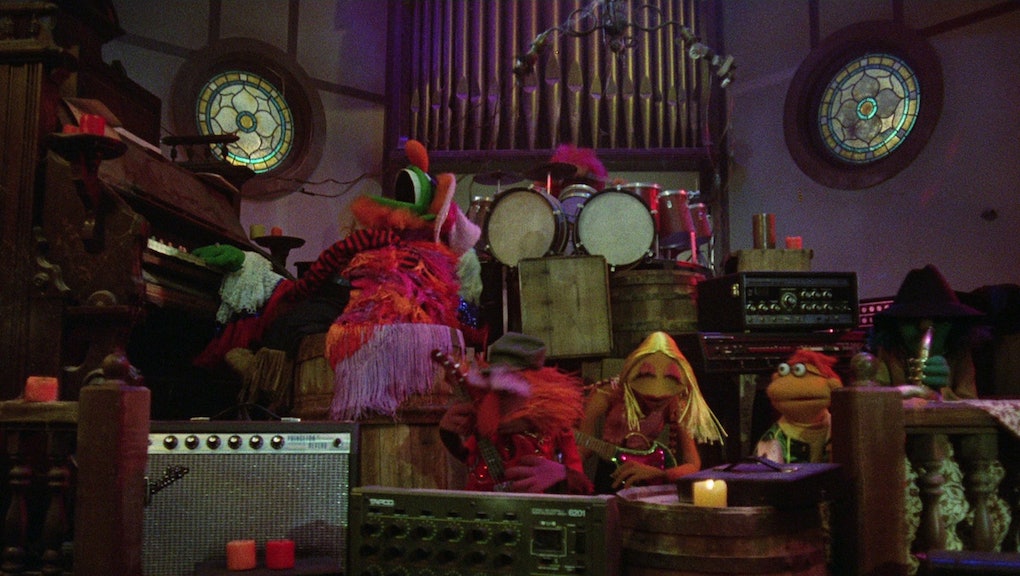 Why the Muppets Are the Soul of American Music

When Jim James, the lead singer of My Morning Jacket, learned that his band wouldn't be recording an album as Muppets, he'd already written several new songs. His band had been tasked with writing as if they were the Muppets' Electric Mayhem band — fitting, since several members of My Morning Jacket closely resemble Animal. But when Disney thought better of the album, James claimed the songs for his own record. One of those songs was "Wonderful." It was the best track on Circuital.

There's a reason that, when James tried to write as a Muppet, he came up with his best recent work. While the Muppets' influence on American culture runs deep in puppetry and children's television, it arguably runs deepest in American music. It sounds insane to say it, but the Muppets and their Electric Mayhem Band are some of the last great American musicians.

On the set of the first Muppets movie, creator Jim Henson was underwater, breathing through an oxygen tank. He was playing the opening scene, singing a song with a character he'd made with leftover cloth from his mother's discarded coat. The character was Kermit the Frog, and Paul Williams and Kenneth Ascher had written a song for him called "Rainbow Connection." It became a radio hit and was nominated for an Oscar. Now it's considered one of the best movie songs of all time.

The group itself represents a vibrant strain of American music that's been absent of late: the weird, anarchic strain found in old blues, folk and rock. It's the swampy American sound of Dylan and The Band's basement tapes, the druggy jams of the Grateful Dead, the caustic humor of Randy Newman and the honky tonk of Jimmy Dean in a time capsule. As American popular music became homogenized in sound and subject, the Muppets and the Electric Mayhem Band only became weirder.

Along the way they've played with some of the greatest musicians in American music. And while those musicians age, the Muppets don't. They've flirted with Rita Moreno (Anita from West Side Story):

They've played "Crocodile Rock" with Elton John (whose crazy costume would later be imitated by Cee-Lo when he played "Forget You" with the Muppets at the Grammys):

They've performed "Ghostriders in the Sky" with Johnny Cash:

Animal even traded drum solos with Buddy Rich, one of the greatest drummers of all time:

The Muppets have teamed up with Paul Simon and Ray Charles too. And they were one of the few bands to get Queen to cooperate with a cover of "Bohemian Rhapsody."

Of course, the easy rebuttal to all this is that they're Muppets, not musicians. They don't write their own songs, but then, neither did Elvis. They're mostly humorous, but so is Randy Newman. They don't sing very well, but neither does Tom Waits. They aren't real, but neither are the Gorillaz.

But on his last show, it was Fallon behind the drums, filling in for Levon Helm on a cover of The Band's "The Weight." For once he didn't seem particularly intent on doing an impression. Around him, the Electric Mayhem Band filled in for Robbie Robertson, Rick Danko, Garth Hudson and Richard Manuel. Animal hit the high harmonies, and the Muppets traded verses as if it was The Last Waltz and Scorcese was filming them. When Fallon walked off the stage to join his new crew, they kept celebrating, animated, once again, by some old American imagination.

Correction September 24, 2014 - An earlier version of this article stated that Jim Henson wrote "The Rainbow Connection." The song is by Paul Williams and Kenneth Ascher.