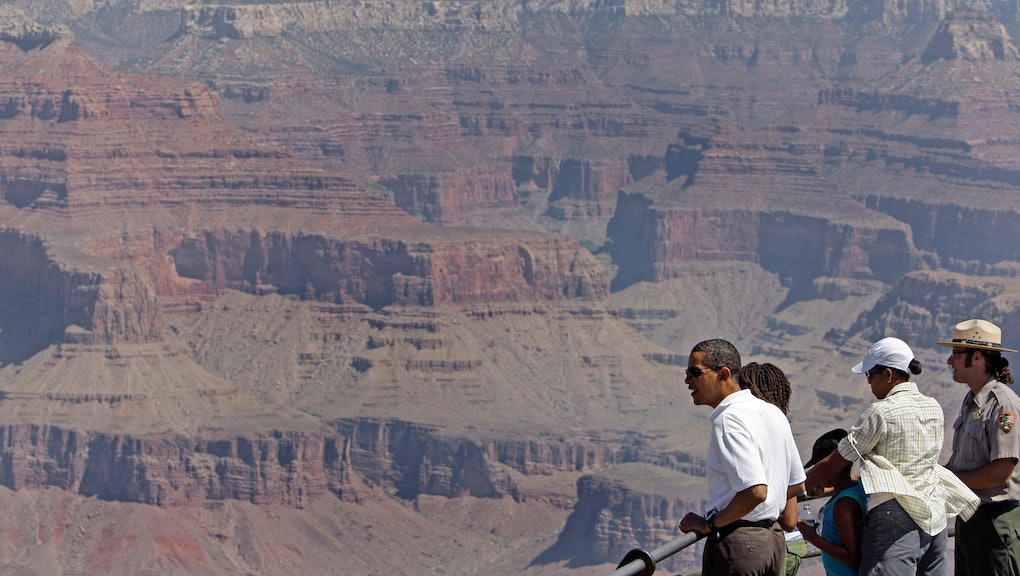 Last week, President Obama moved to protect a large swathe of California's coast near Point Arena as a new national monument. House Republicans are in an uproar — what else — and have scheduled a vote next week to bring down a 108-year-old law that has been used by presidents of both parties to ensure that the nation's natural wonders are preserved by the federal government.

Euphemistically titled the "Ensuring Public Involvement in the Creation of National Monuments Act," H.R. 1459's actual goal is to strip the president of his power to establish new national monuments by instituting caps and requiring congressional review of new monuments. It also orders that future expansions of the National Park Service by presidential order cannot include private property without consent, limits the size of parks or the duration of park status (conveniently until after 2016), and requires the submission of a feasibility study to Congress that includes estimates of the cost of maintenance in perpetuity.

In plain English: In other words, the Republican Party wants to obstruct the executive branch's ability to expand the national park system and place themselves as the arbiter of any expansion in the remainder of Obama's presidency.

If you ask GOP legislators, this is about fighting Obama's increasing autocracy, preserving the powers of Congress, blah blah blah. While there's no doubt many of them believe their own propaganda, their move isn't designed to protect the national park system from an overreaching executive — it's another attempt to advance far-right ideological goals at the expense of one of America's biggest assets.

It's pretty clear that Republicans have zero interest in using their congressional powers to approve any expansions of the national park system. As ClimateProgress notes, Congress hasn't voted to protect a single new acre of land since 2009 — the longest period without expansion of the national parks system since the end of World War II. Coupled with conservative hostility to the perceived growth of federal power and GOP-forced large-scale cuts to the National Park Service, it's pretty clear that H.R. 1459 would constitute a Republican-backed policy of no more national parks. Since 2010, Congress has cut the parks budget by 13%, leading to the seasonal closure of national landmarks like the Grand Canyon and the Great Smoky Mountains. And this is a problem that's been going on since at least 1998, when the Government Accounting Office concluded that "Because of advanced, continuing deterioration [of federal funding], some of these assets may be lost permanently." The National Forest Service estimated that just one out of four of the 158,000 miles of trails were up to internal standards. Sequestration stripped $153.4 million in federal funding from our national parks.

As Salon's Deena Shanker wrote last year, "For Congress, though, it’s not enough just to defund our parks so they slowly fall into total, unusable ruin. In this country, it’s also important that we 'Drill, baby, drill,' not to mention, 'Log, baby, log' and 'Mine, baby, mine.'" GOP lawmakers have proposed we drill everywhere from the Florida Everglades to the Denali National Park and Reserve, while anti-tax advocate Grover Norquist thinks we should just turn the parks over to the states or sell them entirely.

The slow death by a thousand cuts of our national parks is not only a stupid policy for anyone concerned about the environment, it's also a political dead-end. According to a Center for American Progress poll from Nov. 2013 (taken soon after the October government shutdown), voters believe that Washington should be creating new parks and opportunities for outdoorsmanship instead of cutting park budgets or closing them by a 3:1 margin.

Fortunately for more than three out of four Americans, this latest measure doesn't seem likely to pass. The Senate is unlikely to vote in favor of, let alone consider, the vote, and the president would absolutely veto any such legislation. But it's yet another reminder that much of the GOP views the National Park Service as just another waste of government money and an obstruction to industry — something you might want to consider the next time you visit Acadia, Arches, Denali, the Grand Canyon, Yellowstone, Yosemite, or the Great Smoky Mountains.