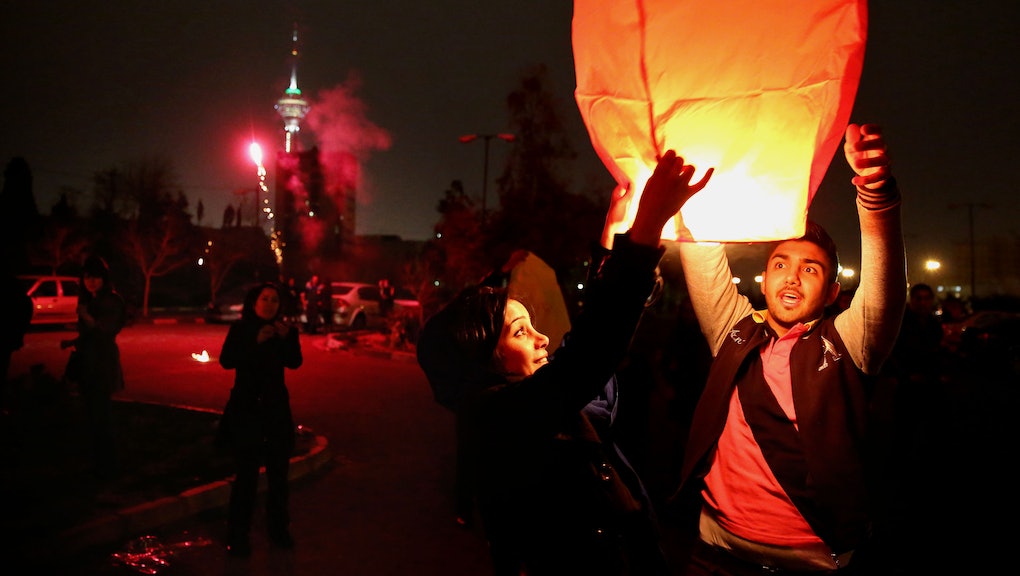 The Story Behind Nowruz, a Beautiful Holiday Most Americans Have Never Heard Of

Christians have tinsel-covered trees and Santa Claus. We have grass and goldfish.

Such are the icons attached to Nowruz, also known as Persian New Year, though it’s not a holiday exclusive to Iranians. Nowruz, which translates as “new day” in Farsi, is a holiday rooted in the ancient religion of the Persian Empire – Zoroastrianism – and has been celebrated for over 3,000 years. Today, it is shared by people in Afghanistan, Albania, Azerbaijan, Iran, Kazakhstan, Tajikistan and Turkey, among others.

Still, it is a vastly important holiday to Iran’s cultural and national identity. In the same way Iranians revere their ancient poets, who provided glimpses into the grandeur of the Persian Empire, Nowruz is a holiday connected to this illustrious past while also signalling the future and new beginnings. It exists outside the realm of politics, and is celebrated by both secular and religious people alike.

It is perhaps for this reason that President Obama has made a concerted effort to issue a Nowruz address to the Iranian people each year – even at the height of U.S. sanctions against Tehran – and also perhaps why Iranians are so often irked by these addresses. Obama’s implicitly political messages betray the very thing that the holiday is meant to represent.

In 2011, I lived in Iran at a time when the neighboring Arab Spring resonated in the streets of Tehran. There I would witness “chahar-shanbe soori,” a fire ceremony that precedes the new year and is perpetually condemned by the regime. Days before the ceremony, officials would broadcast public service announcements on TV and cite the dangers of lighting fireworks and leaping over fire. To those who watched, the government’s underlying apprehension was apparent: Any celebration that has the potential to garner a critical mass might be a threat to the regime.

But Iranians young and old gathered in the streets to the ire of police, building up small fires over which they would leap and recite: “Zardi-ye man az toh, sorkhi-ye toh az man,” which translates as, “My yellow is yours, and your red is mine,” a ritual phrase that appeals to the cleansing effects of fire. We carried fireworks in our pockets and surreptitiously lit them in the streets. Others lit hot air balloons made of tissue paper and watched their flames drift into the night sky.

For those who celebrate, Nowruz is about honoring life’s flux. It is about change. This is the time of year when families have immense spring cleanings in their homes, and individuals are encouraged to make amends with those with whom they’ve had conflict.

The “haft-sin” table, a ritual spread comprised of seven items that start with the Farsi letter “sin,” symbolizes rebirth, health, love and affluence. One of these items, “sabzeh,” or grass, is grown before the new year, and remains on the “haft-sin” table until the thirteenth day when families traditionally visit parks to celebrate the incipient spring. Outside, they dispose of the grass, traditionally within a body of running water.

On this day in Iran, the creeks run with little bundles of grass bound in ribbons that bob to the flow of the current. Where they end up is anyone's guess — it is the not knowing that is most significant.

Because above all, Nowruz signals hope. It is a new day.