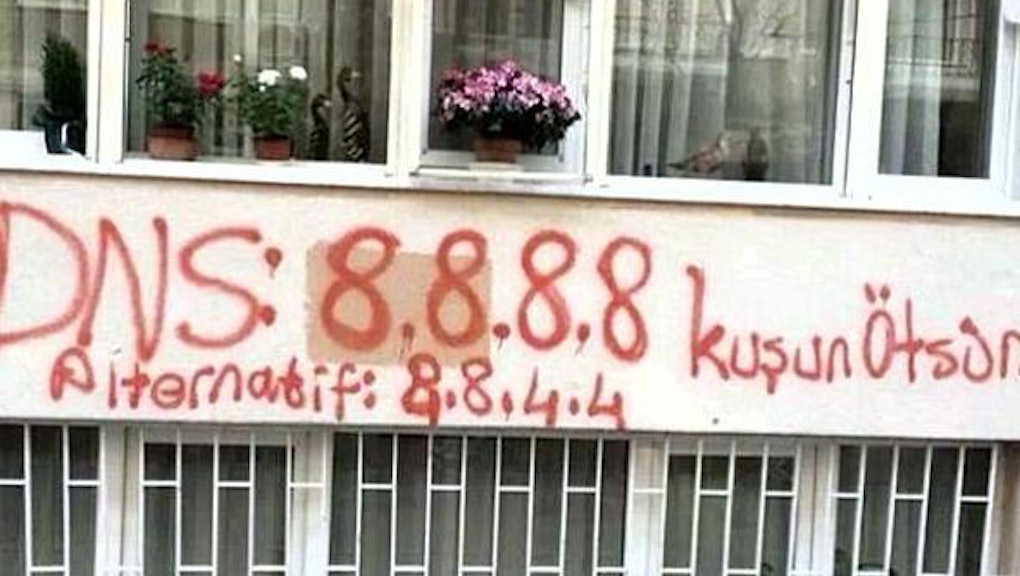 As hard as the Turkish government might try, shutting down Twitter isn't as easy as it seems. At 11:30 p.m. Thursday the Turkish government officially blocked the country's 33 million Internet users from Twitter, but clever, tech-savvy Turks are sharing a simple and effective method to help fellow citizens bypass the ban — and they're sharing it everywhere.

Just hours after Prime Minister Recep Tayyip Erdogan threatened to "root out" Twitter, graffiti has been popping up around Istanbul with two IP addresses anyone can use to circumvent the government's ban. The two numbers — 8.8.8.8. and 8.8.4.4. — refer to Google's Public DNS, which can be easily utilized to maintain access to Twitter.

And it's working. Despite a short blackout, many Turks are back on Twitter, and there's nothing the government can really do to stop them.

" ... it seems that masses of ordinary citizens are learning how to use this technology," wrote Serhatcan Yurdam, a blogger who lives in Istanbul. "Everybody is teaching each other how to change their DNS, how to use VPNs ... and clearly they're catching on quickly, since so many people are still tweeting!"

Step-by-step instructions like this are being widely shared by Turkish Internet users.

Erdogan's motivation was to "eradicate" social media, which he considers "the worst menace to society." While he might have altruistic claims, it's likely his real motivation was to squash any hints of a rebellion as well as to halt the circulation of a leaked voice recording of Erdogan and his son discussing how to hide $1 billion dollars of cash in safe houses — Erdogan called the conversation "completely false" and a "dirty plot."

Of course, Internet users have quickly seen through Erdogan's veiled concerns for this menace to society and are using Google's DNS and various VPN routes to access and use Twitter. As you can see on tweereal.com's map, Twitter users are still active in Turkey.

"I believe that the authorities will never be able to stop people from using Twitter," continued Yurdam. "We'll always find alternative ways to access it. And even if people weren't able to access it, they would try to gather on other similar social networks. Twitter is vitally important for me and millions of Turkish citizens, because Turkish media is under a lot of pressure from the authorities. And social media is now effectively used as medium for sharing news here. In many ways, Turkish people see Twitter as their digital public space."

For several years now, social media has become an integral part of protests and revolutionary movements around the world, enabling important communication and planning like never before. And despite a technologically inept government's attempts to stop it, social media will continue to be a powerful and important tool that cannot and will not be silenced.