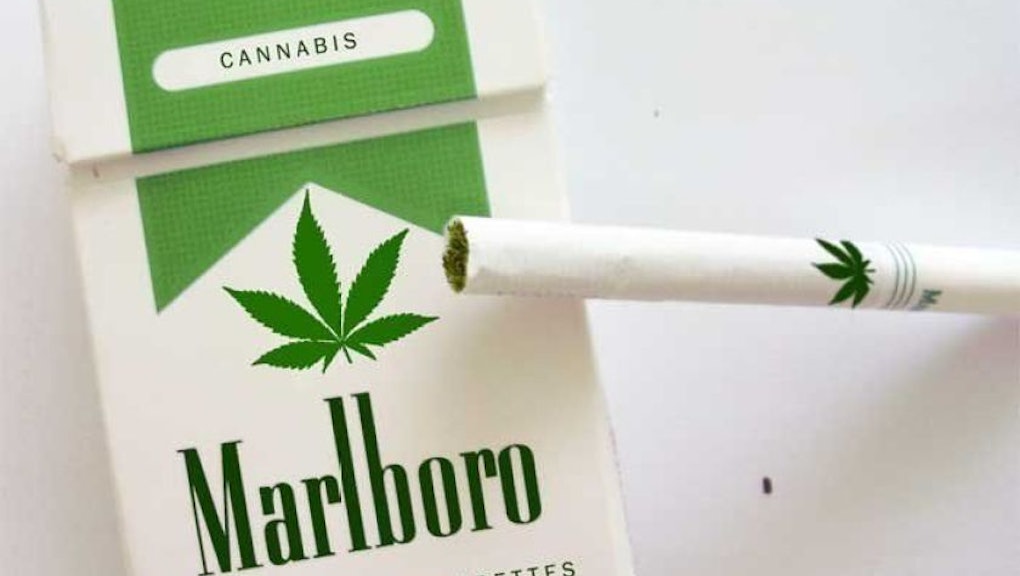 Here's How Much a Pack of Marijuana Joints Could Eventually Cost

How much would a marijuana cigarette cost? Since legalization in Washington and Colorado, an old joke — Marlboro Greens — has been making the rounds again, starting with an article in the satirical publication Abril Uno that claimed Phillip Morris will be introducing Marlboro Marijuana smokes.

The smokes aren't real, but it has people thinking about what the final retail price of such a product would be. According to Fast Company, it would cost Phillip Morris somewhere in the neighborhood of $40 on the low end to make a pack of pure-marijuana cigarettes, while mixed marijuana-tobacco cigarettes might be as cheap as $20. A production cost of $40 means that a pack of the good stuff could cost the consumer up to $70-80 at retail. Premium marijuana could run up to $120, while you could grab a pack of 50-50 marijuana-tobacco cigarettes for about $40.

Wait a second .... But Forbes' Tim Worstall points out that there's a big hole in Fast Company's analysis: they "model the tax take and likely retail prices given the current producers' prices" — i.e., what it currently costs marijuana producers in the U.S. to grow and prepare a gram of weed. "They're not, in any manner, trying to model or calculate producers' prices themselves: they're simply an assumption going into their model." That's a big flaw, because the marijuana industry is "highly fragmented, very inefficient and it is both of these things because it is still illegal."

If Big Tobacco decided to dive into the weed business, the very first thing they'd do is investigate how they can bring production costs down using the same techniques they used to make machine-rolled cigarettes so cheap. In Malawi, for example, growing a kilogram of weed costs just $3. And packaging and distribution costs would be somewhat similar to regular cigarette prices, resulting in a much different estimate of a production cost of 50 cents per pack. Worstall also predicts that after liberalization of the marijuana market, the price crash will be followed by tax changes and calls for protectionism in favor of U.S. producers. All told, marijuana cigarettes could be much cheaper than Fast Company's analysis would imply.

Will this actually happen? That said, Big Tobacco has no plans to get involved in the marijuana business anytime soon, seeing as weed remains very illegal on a federal level. And even if that particular barrier is breached, retailers will have to jump on board selling a very controversial product which might have 50 very different regulatory regimes for each state. Meanwhile, smokers might be suspicious of Big Tobacco-produced marijuana products when buying high-quality weed at a local dispensary is a good option, and options like e-cigarettes and vaporizers could prove to be more popular. There's definitely a market for such a product, but if it happens at all, it'll be decades from now.