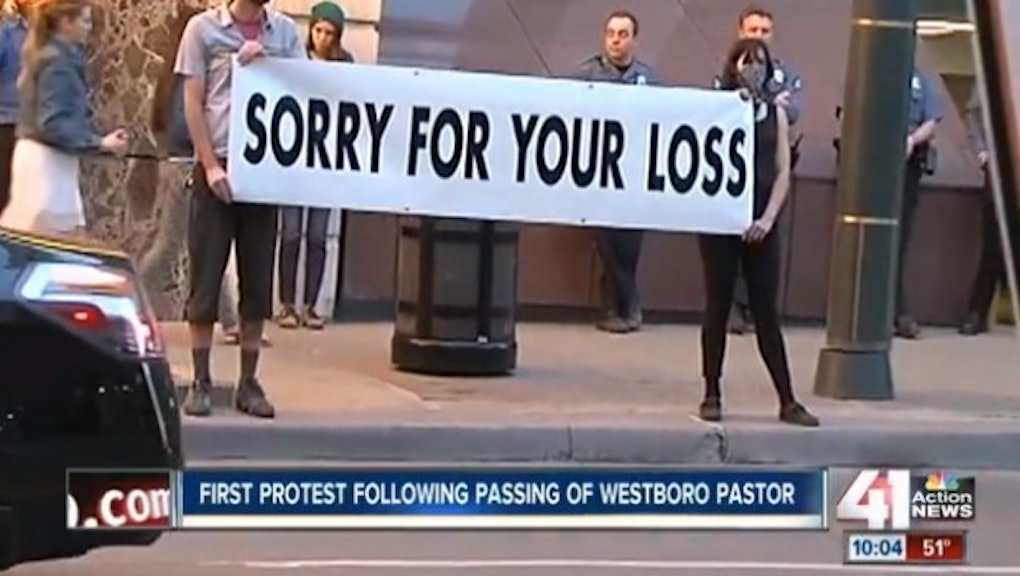 Westboro Baptist Church founder and vitriolic anti-gay bigot Fred Phelps — best known for leading protests of dead American soldiers and others with signs that say "GOD HATES FAGS" and other awful things — died this week at the age of 84.

But instead of protesting his funeral (which according to the WBC, isn't being held anyhow), a group of people showed up outside a WBC protest of a Lorde concert in Kansas City with a different kind of banner.

The best counter to a life filled with hate is compassion, as these Missourians realized.

"We realized that it wasn't so much about antagonizing them but sending out the countered safe that we are here for people who need that message and need that positivity," said Megan Coleman, who helped make the sign.

Love is the only thing that can fight the kind of bigotry the WBC tries to spread everywhere it goes. And compassion for even the church's members is a part of that. In fact, as The Guardian's Patrick Strudwick pointed out, many members of Phelps' family can be viewed as victims of a different kind. Just read how Nathan Phelps, Fred Phelps' estranged son, described his upbringing:

I would see him beat my brothers and sisters and kick them as they lay on the floor. He would grab me, pull me toward him and then put his knee up so it would go in my stomach. He would do that over and over and over … Then there was the mattock. It’s a two-headed farming tool, with a hole on one side and an axe head on the other. He used that to beat us. He also had leather boxing gloves with a bar running through. He would put those on to hit me round the face and body. He would strangle me … As he beat us he would tell us that we were evil and deserved to die.

Ex-members of the church, including two of his granddaughters, have described their experience as similar to a cult. And here's the note Nathan originally posted on Facebook when he learned of his father's condition.

"With love's antithesis being indifference, forgiveness — that highest of virtues — is surely the real antidote to hate," Strudwick writes.

Actor and gay rights activist George Takei also had this to say:

"I take no solace or joy in this man's passing. We will not dance upon his grave, nor stand vigil at his funeral holding 'God Hates Freds' signs, tempting as it may be. He was a tormented soul, who tormented so many. Hate never wins out in the end. It instead goes always to its lonely, dusty end."