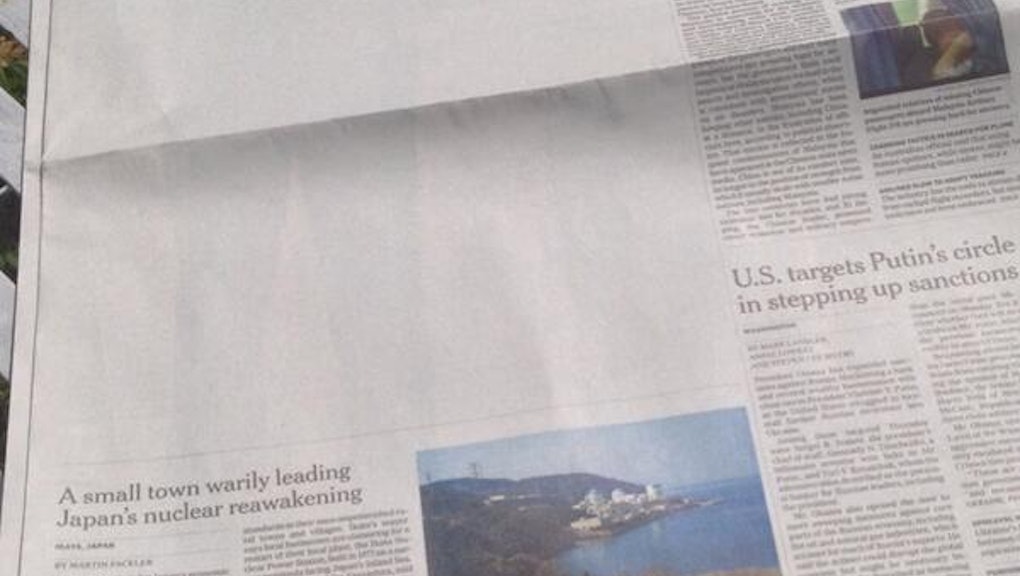 Saturday's international edition of the New York Times looked a little off for some reason — perhaps the giant white space on the front page where a story on Pakistan's secret ties to dead terrorist leader Osama bin Laden would have appeared.

The omission couldn't have been more obvious if Pakistan's censors had just put a big red stamp that says "IGNORE ME!" over the entire article. It's so conspicuous, in fact, it's almost certainly an intentional middle finger to the American press. Compare the original version from the Times' Asian edition to the ones below:

So, clearly Pakistan is a little angry about this story. But why?

The cut article, written by Carlotta Gall, was titled "What Pakistan Knew About Bin Laden" and has gotten a lot of press in the past few days. It accuses the powerful Pakistani intelligence agency, the ISI, of having direct knowledge of bin Laden's presence in the country before he was killed by U.S. Navy SEALs in his Abottabad compound in May 2011. Here are two bombshell quotes:

"Soon after the Navy SEAL raid on Bin Laden’s house, a Pakistani official told me that the United States had direct evidence that the ISI chief, Lt. Gen. Ahmed Shuja Pasha, knew of Bin Laden’s presence in Abbottabad. The information came from a senior United States official, and I guessed that the Americans had intercepted a phone call of Pasha’s or one about him in the days after the raid. 'He knew of Osama’s whereabouts, yes,' the Pakistani official told me."

"According to one inside source, the ISI actually ran a special desk assigned to handle Bin Laden. It was operated independently, led by an officer who made his own decisions and did not report to a superior. He handled only one person: Bin Laden. I was sitting at an outdoor cafe when I learned this, and I remember gasping, though quietly so as not to draw attention ... The desk was wholly deniable by virtually everyone at the ISI — such is how supersecret intelligence units operate — but the top military bosses knew about it, I was told."

The notion that Pakistan would deliberately withhold information about bin Laden's location is not without its fierce critics, including CNN's Peter Bergen, who dared Gall to prove it and said so far there was no evidence to suspect a betrayal. In fact, Pakistani officials were stunned (and enraged) by the raid that eventually buried bin Laden forever — supposedly because they had no idea of his presence and were furious to learn they were so distrusted that America launched the operation without their knowledge or cooperation.

Either way, Pakistan's intelligence community doesn't like their dirty laundry aired in public. Freedom of the press? Never heard of it.