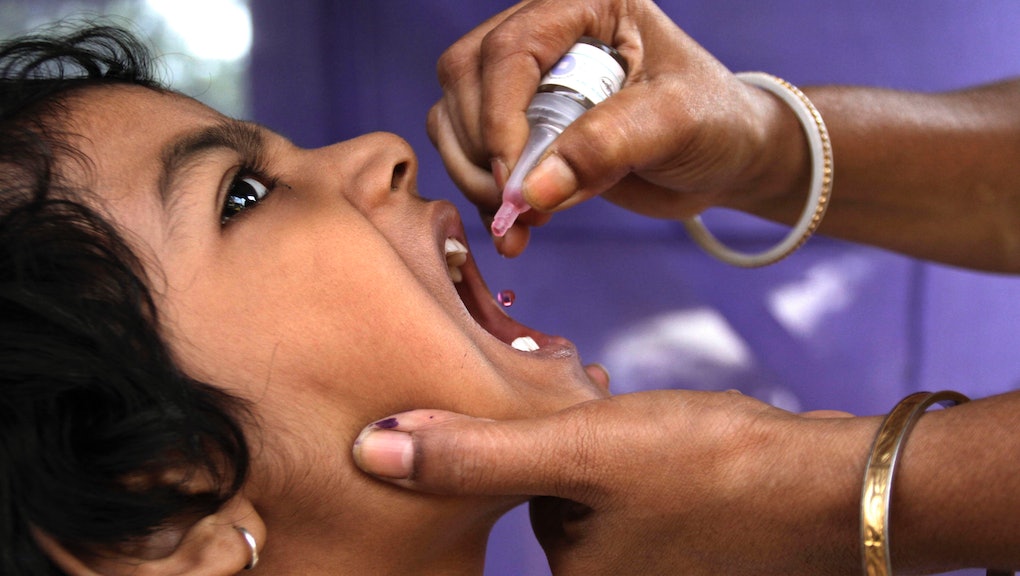 The anti-vaccination movement has yet another inconvenient truth to explain: the near-complete eradication of the polio virus across an entire country thanks to a sweeping campaign by health authorities to vaccinate children.

Rukhsar Khatoon is believed to be the last child with polio in India. It's been three years since another confirmed case. And it's all thanks to vaccination. Despite India's abysmal public health system, the Global Polio Eradication Initiative helped achieve 95% coverage across the nation. When the campaign was launched in 1988, polio permanently disabled 200,000 children a year in India. In 2009, polio affected just 741 children. Now it's none.

Here's how India has achieved such stellar results, according to the New York Times' Esha Chhabra:

Health workers, usually women, stand at the booths for eight hours to ensure that every child in the neighborhood is vaccinated. The vaccinated children are marked on the nail of their pinky with black ink. The following day, the health workers search for missed children by going door-to-door, carrying the vaccine in an icebox.

We collect the data, identify gaps, and give it to the government to make decisions,” [Dr. Rakesh Vishwakarma, a World Health Organization regional supervisor] says, pointing to multicolored maps and meticulous charts taped to the wall. Every village in the district is accounted for and marked by percentage of children immunized. Red pins mark stool samplings, which are collected to track the virus, and ensure that any cases of acute flaccid paralysis, or limp limbs, are diagnosed properly. Flaccid paralysis is not necessarily polio; weakness in the muscle can be caused by other pathogens. The W.H.O. checks each case of paralysis to be sure it's not polio.

All this intense effort paid off big time. Khatoon, the last known case, only has polio because her parents decided not to vaccinate her because she was a sickly child and they feared it would strain her immune system. They now regret the decision.

Smart planning: Anti-vaxxers insist that parents should be allowed to choose on their own whether their children will be vaccinated and claim utterly unfounded tales of autism and other health effects. But India's intensive system, which achieved 95% coverage, is the only one proven to work. And it took intensive international coordination (another thing anti-vaxxers would be mighty suspicious of) to pull off, with UNICEF, the World Health Organization, the Centers for Disease Control and Prevention and Rotary International all playing roles ranging from data collection and analysis to fielding the teams that staff India's National Immunization Days.

Clear effect: This is the way to eradicate disease, with a prominent and dedicated national health campaign. Compare the demise of polio in India with its problems with other easily preventable diseases; the nation's routine immunization rates for measles, rubella, hepatitis B, TB and others hovers around 61%, far short of recommended rates for herd immunity. The result? India suffers from a third of the world's measles deaths, while countries which have more or less completely driven out the disease thanks to vaccines saw the rates plummet. In 2009, the U.S. averaged just 50-60 cases of measles a year. The first two months of 2014 have seen that many cases already, thanks in large part to parents who refuse to vaccinate their children.

Anti-vaxxers would rather have you listen to their ill-concocted mix of anecdotes, ill-founded scientific misconceptions and hysterical paranoia about autism than the medical community. A quick look at India's record should let anyone know not to listen to the cranks.