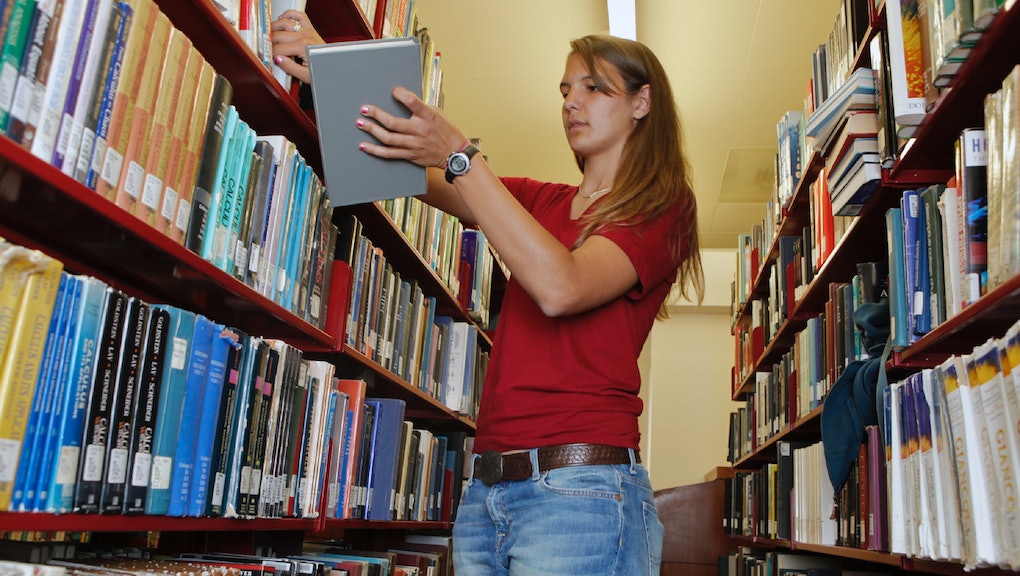 This University Has a Revolutionary Idea to Make Students' Textbooks Free

The problem: One of the worst abuses of the American university system today is the skyrocketing price of textbooks. According to a 2012 chart from OnlineEducation.net, the average price per year of college textbooks is around $900 and the average price of a textbook is around $175. The College Board estimates that cost is actually much higher, at about $1,200 a year. That's a lot of money that many students are basically forced to pay to keep up with their education, and a ridiculous affront to the idea that education should be affordable and accessible to people of all socioeconomic classes. About 65% of 2,000 surveyed students skipped buying a book rather than purchase an overpriced one, according to a January study by the U.S. Public Interest Research Group.

The solution: That's why the University of Maryland is launching a pilot program this semester to use open-source digital textbooks instead of paper-and-ink printed copies, a move they expect to immediately save 1,100 students a cumulative $130,000. The University of Maryland Student Government Association is one of the key groups lobbying for the change, which is summed up in the infographic below:

And in these testimonials from students:

Textbook prices are "quite ridiculous," says Jesse Fox, the current president of the University System of Maryland Student Council. "The only reason this is the case is textbook companies can do this. There's no check and balance."

Will this really work? UMD professor Scott Roberts says that the process of compiling an open-source textbook, however, is incredibly time-consuming and difficult. But he's participating in the program despite 80 hours of work per textbook because the expensive pre-compiled ones are "constantly updated with little justification."

"The question is: Is it worth the cost that students are paying for it? If we can get the job done without it, I think we have an obligation to our students to do that," Roberts claimed.

And it's not just the massive amount of work already-overburdened professors need to put into compiling their own textbooks that prevents reform — binding contracts often force colleges to work with certain publishers. But there are significant benefits to open-source textbooks other than low costs, including the ability for professors to instantaneously update texts. The labor involved to make them could also eventually be crowd-sourced or crowd-funded, removing the need for professors to overwork themselves to save students money.

UMD's test program is underway — for students across the country, let's hope it's a success.