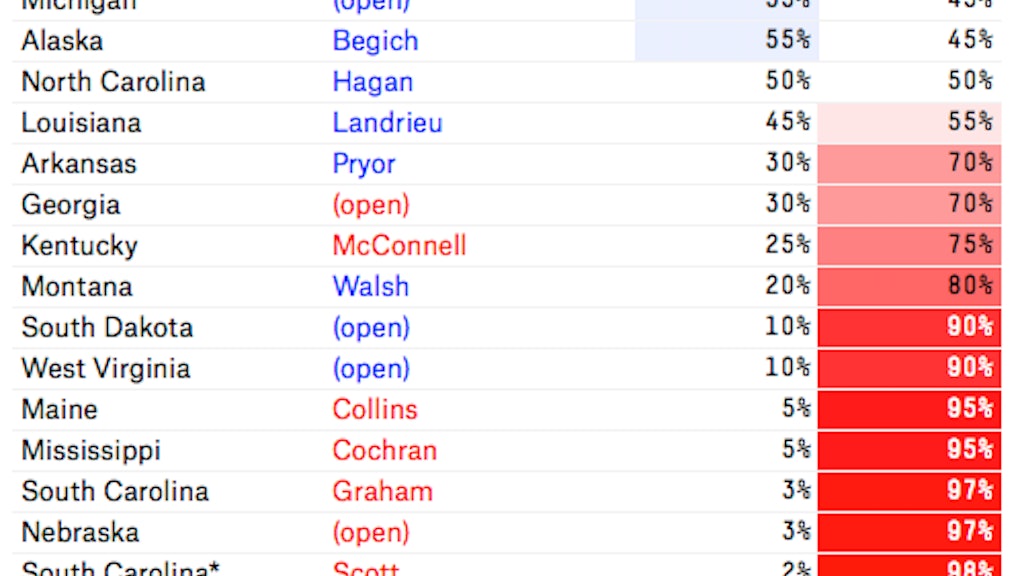 Nate Silver's much-anticipated FiveThirtyEight site just launched this month and there's been a lot of speculation regarding what political predictions the statistics wonk will come up with next. Well, the site already has it first big forecast, and it may be a surprise to some: while Silver originally wrote that the 2014's 36 Senate races would be a toss-up, he now believes that the Republicans are the "slight favorites" to win the Senate chamber.

According to FiveThirtyEight, the Republicans have a clear edge in Senate races in West Virginia, South Dakota, Montana and Arkansas. If the GOP maintains its seats in Georgia and Kentucky and wins the toss-ups in Alaska, North Carolina or Michigan, it has a 60% chance of turning the Congress fully red.

Here is how the breakdown looks so far:

The statistician also points at the national political climate, and how President Barack Obama's lower approval figures may reflect badly on the Democratic Party in general. "Certainly the unpopularity of the Affordable Care Act — and its clumsy roll-out late last year — contributes to Democrats' problems. But it's hard to tell where Obamacare's unpopularity ends and President Obama’s overall unpopularity begins," he writes.

Silver's prognostication has already led to hysteria from liberals and glee from conservatives — although the latter may have already forgotten how they once called Silver an "Obama propagandist" for accurately predicting the president's victory two years ago.

Still, the stats guru is cautious about calling the election this far in advance. The current prediction "represents an edge for Republicans, but not much of one — and there are any number of paths by which they might get to 51 seats, or fail to do so," Silver writes, adding that updated head-to-head polls haven't been published for many races, and that things are still in flux with many months to go. In fact, his write-up doesn't bring up other national political events that may weigh in on the midterms, such as last year's government shutdown.

But while Silver's current prediction may not be a definitive prophecy, Democrats still have more than enough to worry about if they want to turn these portentous numbers around.