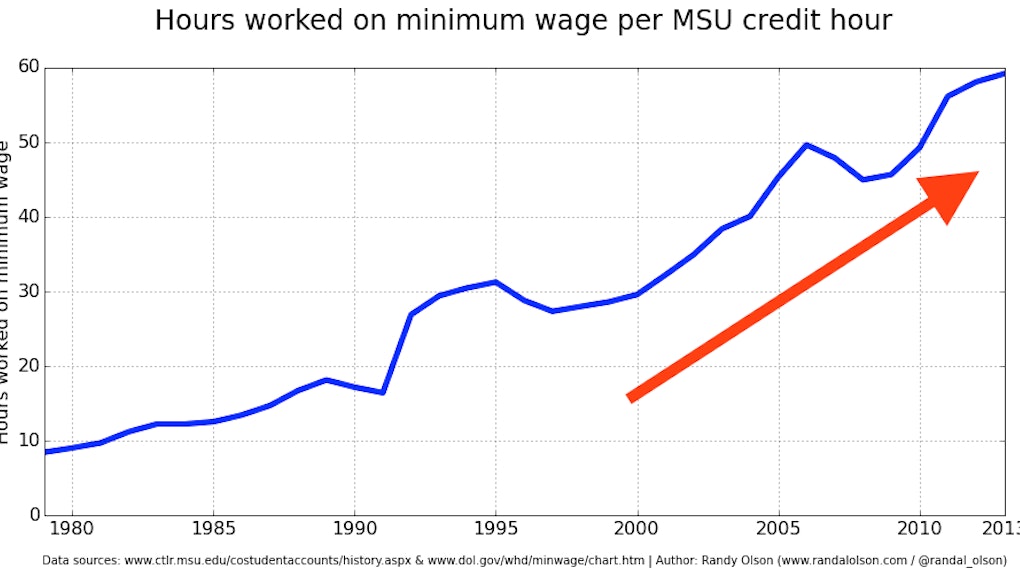 This chart from Michigan State University computer science graduate student Randy Olson explains why working your way through college — something many people who grew up in more fortunate economic times recommend — is pretty much impossible these days.

Comparing federal minimum wage trends to the rise in MSU tuition over the past 30 years, Olson found that the average 2013 MSU student would have to work six times as long at minimum wage to pay for their tuition as they would in 1979. As Olson writes:

Anyone who has attended college full-time knows that this is basically impossible for the vast majority of students. So no, older people who worked their way through college. Young people aren't lazy. They're the victim of economic forces beyond their control.

And, by the way, younger people are working harder and longer as they make their way through college than ever before. According to the U.S. Census Bureau, 71% of the nation's 19.7 million college students worked in 2011. One in five undergrads was pulling a full-time job of at least 35 hours a week. And those part-timers were working hard, too, with more than half logging over 20 hours a week. Grad students have it even worse. 82% of them work, while nearly half were full-time.

According to a YouGov poll released in October, just 18% of students said they were able to pay their own way through school. And they're not relying on mom and dad, either. Sallie Mae-Ipsos found that parents dropped their contribution to education costs by a shocking 35% from 2010-2012.

All told, today's college students are getting less parental support, seeing tuition skyrocket, and working harder and longer in spite of it all. All this stress and labor isn't conducive to learning. So the next time someone claims young people aren't doing well in this economy because they're too lazy, you can tell them to shove it.